Matt Milnes took 6 wickets for Kent as they would defeat Leicestershire inside 3 days in the County Championship on Wednesday.

Resuming on 100/1, the hosts would add 15 to their overnight score before Luke Wells would be bowled by Liam Norwell for 45. A 129-run third-wicket partnership from Josh Bohannon (pictured below) and Dane Vilas would end with the latter caught by Rob Yates off the same bowler for 67. Rob Jones would be LBW later in the same over without scoring before Liam Livingstone would be Norwell’s fourth wicket of the day as he was bowled for 12.

George Lavelle would be LBW to Craig Miles for 4 before Danny Lamb would be bowled by Danny Briggs for 8. Tom Bailey would be caught behind by Michael Burgess off the same bowler for the same score before Bohannon would be stumped by Burgess of Briggs’ bowling for 170. Matt Parkinson would be LBW to Norwell for 3 with Saqib Mahmood 5 not out.

Yates would be the only wicket to fall in Warwickshire’s second innings as he was bowled by Mahmood for 1 with Dom Sibley (17) and Chris Benjamin (28) resuming this morning.

Resuming on 87/7, the hosts would move to 97 before Jack Leach would be caught by Joe Clarke off the bowling of Brett Hutton for 10 with Josh Davey caught behind by Tom Moores off the bowling of Dane Paterson (pictured below) for 6. Marchant de Lange would be the final wicket to fall, bowled by Hutton, for 6 with Jack Brooks 4 not out.

Tom Banton would be LBW to Paterson for 17 before Roelof van der Merwe would be caught by Sam Northeast off the same bowler for a golden duck. Lewis Goldsworthy would be bowled by Paterson for 11 before Leach would be stumped off the bowling of Liam Patterson-White for 35 off 37 balls. de Lange would be caught by Steven Mullaney off the same bowler for 36 off 29 balls before Brooks would be the final man out, bowled by Fletcher, for 4 with Davey finishing 20 not out.

Resuming on 71/6, the hosts would add 2 to their overnight score before Andrew Salter would be bowled by Jamie Porter for 11 with Timm van der Gugten caught behind by Adam Wheater off the bowling of Sam Cook (pictured below) for 4. The final two wickets would also fall to Cook, first Lukas Carey caught by Josh Rymell for 29 off 17 balls then Michael Hogan would be bowled for a golden duck – the seamer finishing with 5/37 in the second innings.

Resuming on 90/6, the hosts would move to 101 before Zafar Gohar would be LBW to Luke Procter (pictured below) for 7 with Tom Price bowled by Simon Kerrigan for 16. Graeme van Buuren would be LBW to the same bowler for 56 before Jared Warner would be last man out, caught by Ricardo Vasconcelos off the bowling of Procter to complete his 5-fer, for 10 with Matt Taylor 24 not out.

Saif Zaib would be caught behind by James Bracey off Warner’s bowling for 14 before Adam Rossington and Harry Gouldstone would both be bowled by Higgins for 18 and 7 respectively – Taylor (5) and Simon Kerrigan (0) resume in the morning.

Resuming on 210/9, the visitors would move the score onto 262 before James Logan would be the final man out, bowled by Colin Ackermann, for 4 with Darren Stevens 107 not out.

Chasing 386 to win, Leicestershire would lose Sam Evans LBW to Matt Milnes for 1 before Hassan Azad would be LBW to Stevens without scoring. Ackermann would be caught by Crawley off the bowling of Milnes for 2 before Louis Kimber and Ben Mike would both be bowled by Milnes in the same over.

Resuming on 201/9, the visitors would add 4 before Sam Conners would be caught by Martin Andersson off the bowling of Ethan Bamber off the fifth ball of the morning.

Chasing 334 to win, Derbyshire would lose Luis Reece, caught behind by Simpson off the bowling of Murtagh, without scoring with Billy Godleman (21) and Tom Wood (18) resuming in the morning

Resuming on 186/7, the hosts would add 15 to their overnight score before Joe Leach would be LBW to Henry Crocombe for 18 before Josh Baker would be caught behind by Oliver Carter off the same bowler for 5. Dillon Pennington would be the final wicket to fall, caught & bowled by Fynn Hudson-Prentice for 6 – Adam Finch finishing 3 not out.

Hudson-Prentice would be the final wicket to fall on Day 3, stumped by Cox off the bowling of Baker for 46 with Danial Ibrahim and Archie Lenham resuming on 56 and 4 not out respectively.

Tables Going Into This Round 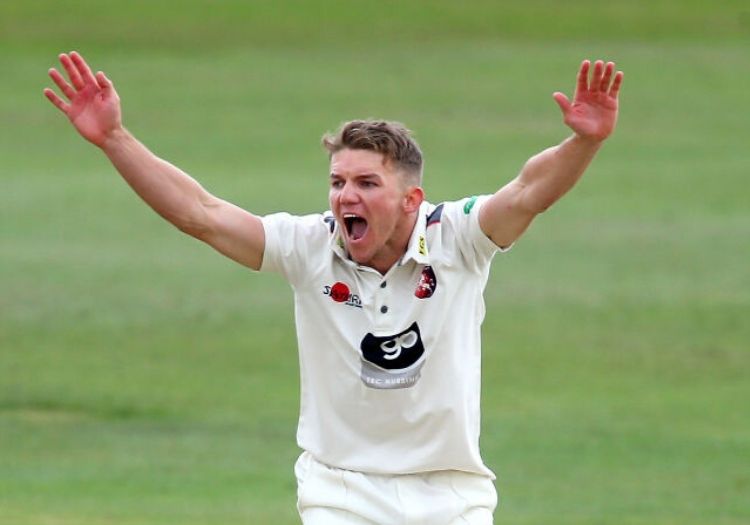