For weeks now there were rumblings that Jonathan Drouin was on the move. The destination was narrowing to the point where all you could hear is one destination, Montreal. Prior to the trade being announced, rumors were that it would be a swap of Jonathan Drouin for Alex Galchenyuk. In the end, Jonathan Drouin did land in Montreal, but it was Mikhail Sergachev that was headed the other way.

Let’s break this down.

Drouin is coming off his best season in his 2 and a half year career in the NHL putting up 53 points (21 goals and 32 assists) in 72 games for the Lightning. Reaching the 20 goal plateau in his second full season in the NHL is a mighty feat. Why would Tampa Bay want to trade a promising young forward? Preparing for the expansion draft? Or is this a simple hockey trade? or both?

Tampa Bay is in the win-now mode. Several of their players – including Tyler Johnson, Ondrej Palat and Andrej Sustr – have expiring contracts. Due to the limited cap space, it just doesn’t seem plausible that Tampa Bay would have been able to retain all their pieces.

Tampa Bay does have depth at forward, so it allows them to move one of their forwards for a defensive type player who can help this mediocre defensive team, but also help chip in offensively.

With the historic drama between Drouin and the Lightning organization it only seems fitting for Drouin to be the one to go. He has shown frustration with the organization in the past. Drouin is looking for a big contract that the Lightning might not be able to afford. This move allows Tampa to protect another forward for the upcoming expansion draft since Mikhail Sergachev is ineligible.

Mikhail Sergachev has only played 4 games in the NHL. He has proven to be a force offensively as well as hold his own defensively in the OHL. It normally takes defensive blue chip prospects longer to develop, so short-term it does hinder Tampa, but getting another young talented (less expensive) player in a position they coveted certainly lessens the blow.

Now looking at it from Montreal’s side of things. Montreal hasn’t been able to finish in the top 15 in scoring since the 2012-2013 season. However, they have been one of the best defensive teams for years. People say defense wins championships but clearly, defense alone hasn’t been able to help Montreal achieve just that. Montreal only had two players who scored 20 plus goals last season. The New York Islanders were 10th in scoring and had five players who reached the 20 goal plateau last season. Islanders just missed out of the last playoff spot, so clearly offensive isn’t everything, but it certainly helps.

Montreal only mustered up 1.83 goals for per game in these past playoffs. Drouin already has playoff experience under his belt. He showed he can produce as he scored 14 points in 23 playoff games – Those 14 points coming in the last 17 playoff games.

After the trade, TSN reported Montreal and Drouin came to an agreement for a six-year $33 million contract (average annual value of $5.5 million). Montreal will have to use one of their player protections for the expansion draft on Drouin.

Even though Montreal still hasn’t addressed their Centre issues, they certainly have taken a step forward in trying to improve a struggling offensive team.

In terms of the conditional picks, the Canadians will trade a 2018 2nd round pick for Lightning’s 2018 6th round pick. The condition is if Sergachev plays 40 games for Tampa Bay next season (regular season and playoffs) then no picks are exchanged.

It seems like both teams got what they wanted. Drouin has shown he can be a successful scorer in this league. Sergachev is still inexperienced in the NHL, but a lot of chatter says Sergachev very well might be the best defensemen from the 2016 NHL Entry Draft. Whether that comes back to bite Montreal, only time will tell. 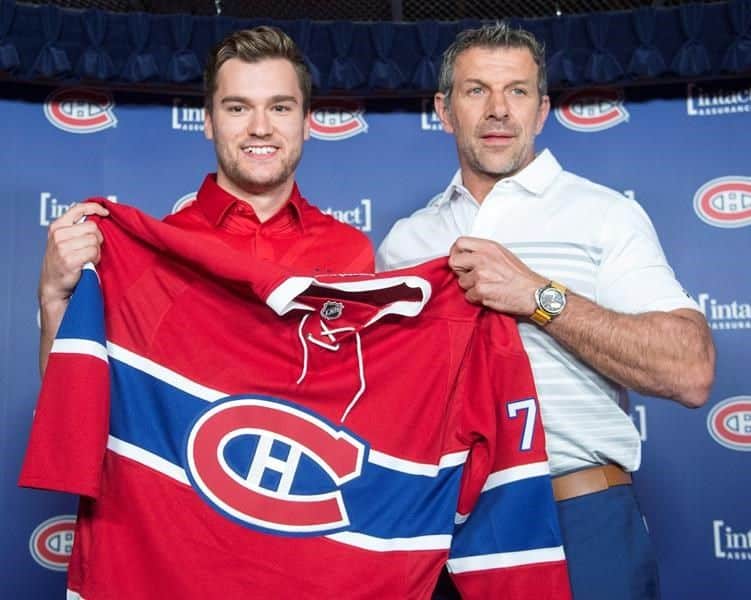