Multan Sultans registered a spectacular win after an all-round performance at Multan Cricket Stadium. After putting into bat, Multan’s batsmen off to a positive start. In the absence of Vince, Zeeshan Ashraf is promoted above the order but gone off cheaply handing a catch to Babar Azam.

Ali and Masood built a partnership, heading their team to a mighty total. Both started playing some reckless shots took bowlers to the cleaner. In the attempt of accelerating scoreboard, Ali got out after scoring 65 including 4 fours and 4 sixes. Masood also got out after scoring fifty, keeping Karachi in the game.

Multan’s lower-order wasn’t enough to make them cross 200. Khushdil, Bopara was trying hard but not finding the middle of the bat. Amir and Jordan made a strong comeback conceding just 20 runs in the last three overs. Sultans finished at 186-6, Umer Khan went over less while Imad Wasim bowled just one over.

In the response of 187, Karachi’s batsmen looked clueless after losing their main player Babar Azam. It was when Alex Hales came out that chase looked lively. Alex Hales smashed 4 fours and 1 six by just spending 20 balls on the crease. He got caught at the point after scoring 29 runs.

That dismissal paved the way for Multan’s bowlers to step-up into the match. After that Multan’s spinners came in the game and batsmen were struggling to tackle them. Imran Tahir made a strong impact in the game after picking Delport. As Afridi picked Imad Wasim, Karachi Kings down to 75-5 in 9.4 overs.

Karachi’s lower-order wasn’t enough to handle pressure and the whole team bundled out for 134 with three overs to spare. Umaid Asif showed some resistance with a couple of sixes but didn’t get support from the other end. Their 40-year-olds Tahir and Afridi picked three and two wickets respectively.

Moeen Ali awarded man of the match for his impressive knock of 65 runs. The home crowd came in a large number to support their team and see them over the line. With this win, Multan Sultans goes to the top of the table having three wins out of four with a strong run-rate of 1.372. 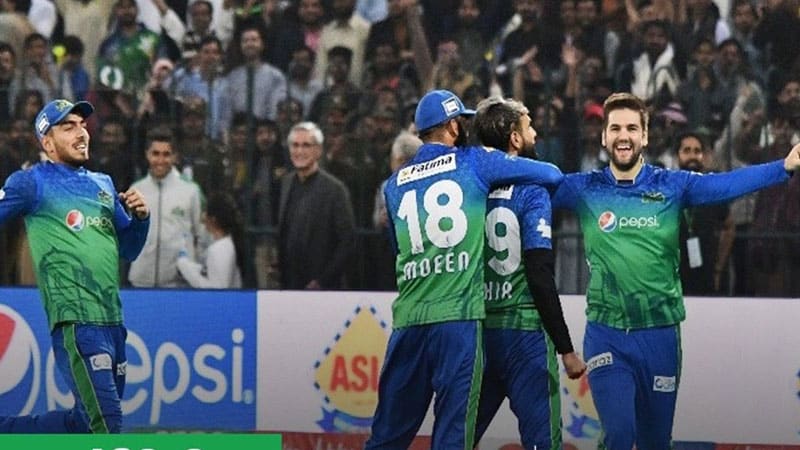