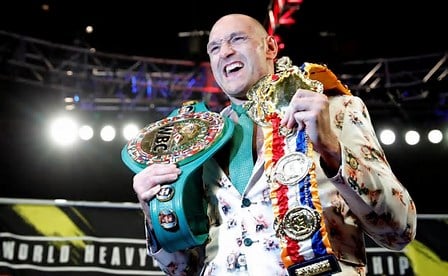 Redemption comes in many forms its religious connotations are well documented and the oxford dictionary defines this as the act or process or an instance of redeeming. Rarely in a sporting context can it carry more resonance than Tyson Fury’s journey from reviled to revered, which climaxed in the early hours UK time Feb 23rd in his crowning in round 7 to capture the WBC heavyweight title and doubtless stir notions of a Hollywood movie in the making…

Boxing promoter Frank Warren who has seen a thing or two remarked this was not only the greatest comeback in boxing but the greatest comeback in sport. His place in boxing folklore and the famed Ring magazine is forever assured. To stand at the summit and look back at the traverse to that moment reveals a story of anguish and despair but above all hope and the embodiment of resilience.

The rise and fall and rise again of Fury has its origins after one of the greatest performances on foreign soil in winning WBO WBA IBA heavyweight titles from one Vladimir Klitchko. However great reaching that pinnacle was Fury never got the acclaim he craved and so the steady descent began, spiralling into his well documented depression and drug abuse lived out in the prism of the press, and the gravity of his mental state summed up by his own words “I’m a manic depressive all the money fame and glory means nothing if you’re not happy I don’t even want to wake up I hope I dies every day”. Fury’s accomplishment from that dark place gives hope to all.

From the moment he text Ben Davidson signalling the comeback trail, fights again Seferi and Pianneta and Wilder 2018 to the moment in their first fight, a fight in which a Wilder combination pixelated Fury’s senses. The scrambled seconds that ensued represented a microcosm of his odyssey, rising from the depths to complete his journey from hopelessness to victory in the early hours of Feb 23rd.

So what next. Those closest to Fury still harbour worries over his tendency to still frequent that dark place of mental struggles so perhaps his greatest battle is still ahead. A certain person across the pond (Anthony Joshua) may fancy a tickle he remarked teasingly post fight. The ascent to the top is riddled with risk a precipice around every turn. Lets hope Fury for now has a steady foothold.