Now that the 2020-21 NBA season is underway, there have been a few hot starts from the Orlando Magic and the Philadelphia 76ers, plus a few high marquee matches. There were also blowout games and revenge games to gaze upon. Here’s a quick recap of some of the more notable games that occurred during the second week of the NBA season. 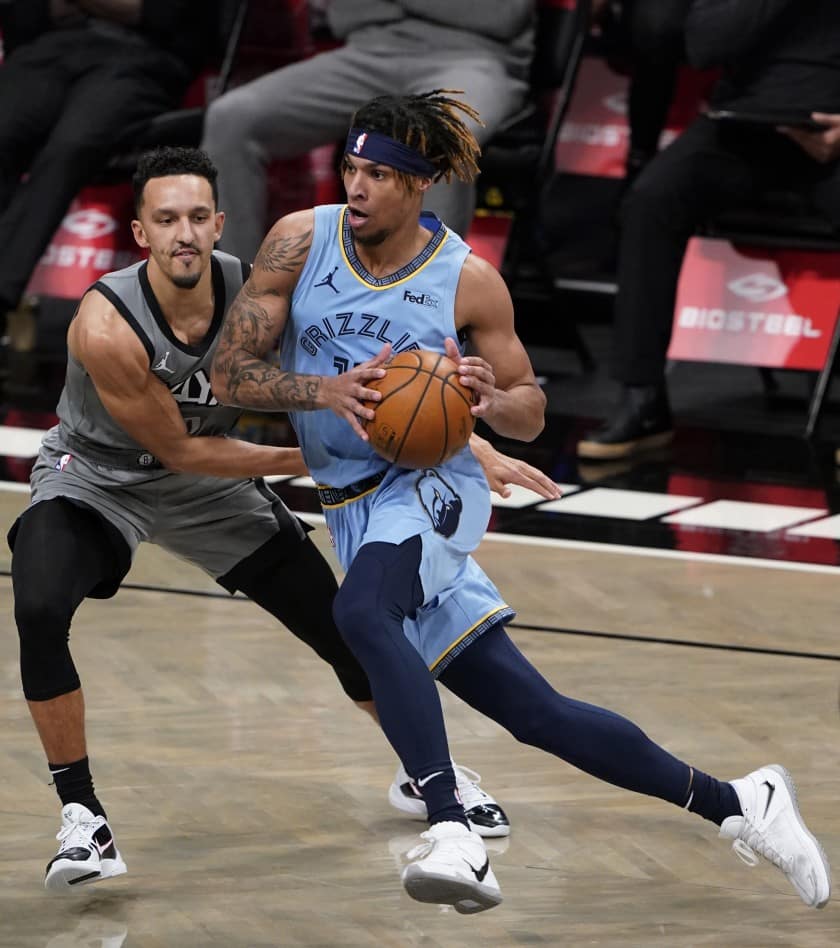 On Monday, the Brooklyn Nets fell to the Memphis Grizzlies in a 116 to 111 overtime contest, which saw Kyle Anderson knock down 28 points and Dillon Brooks with 24 points. The contest also saw Ja Morant go down with an ankle injury after landing awkwardly on his left ankle. Morant will miss 3 to 5 weeks for the Grizzlies. The Utah Jazz prevailed over the Oklahoma City Thunder in a close game with a score of 110 to 109. Donovan Mitchell had 20 points, Bojan Bogdanovic made 23 points, plus Rudy Gobert and Mike Conley were in double-double figures. Gobert had 12 points and 10 rebounds, while Conley made 20 points, 10 rebounds, and 9 assists.

The Portland Trail Blazers prevailed over the Los Angeles Lakers with a 115 to 107 score. Damian Lillard led the way with 31 points, Gary Tent Jr. with 28 points, plus three players in double-double figures. C.J. McCollum with 20 points and 11 assists, Jusuf Nurkic had 10 points and 12 rebounds, and Enes Kanter with 12 points and 14 rebounds. Meanwhile, the Lakers saw LeBron James with 29 points, Dennis Schroder made 24 points, Kentavious Caldwell-Pope had 14 points and Anthony Davis with a double-double of 13 points and 10 rebounds. 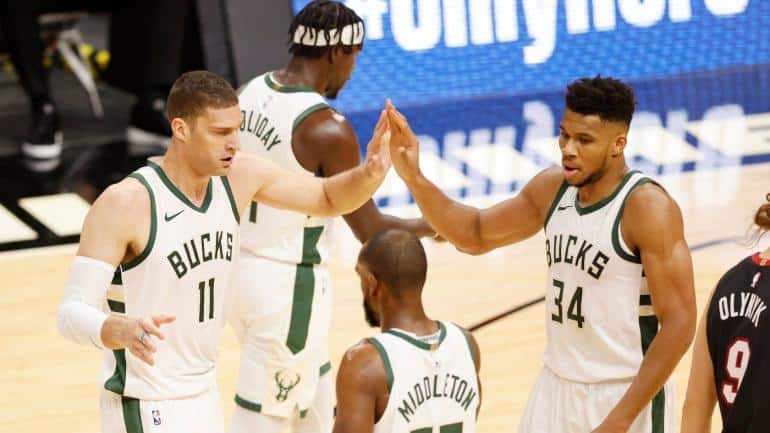 Tuesday’s games were headlined by the Milwaukee Bucks delivering a blowout to the Miami Heat. The Bucks knocked down 29 three-pointers, a regular-season record, despite Giannis Antetokounmpo making only 9 points. Other games included the Golden State Warriors prevailing over the Detroit Pistons with a 116 to 106 victory, the Boston Celtics winning over the Indiana Pacers 116 to 111, the Phoenix Suns blowing out the New Orleans Pelicans with a 111 to 86 win, the Los Angeles Clippers with a 124 to 101 win over the Minnesota Timberwolves and the Orlando Magic improving their record against the Oklahoma City Thunder in a 118 to 107 win. 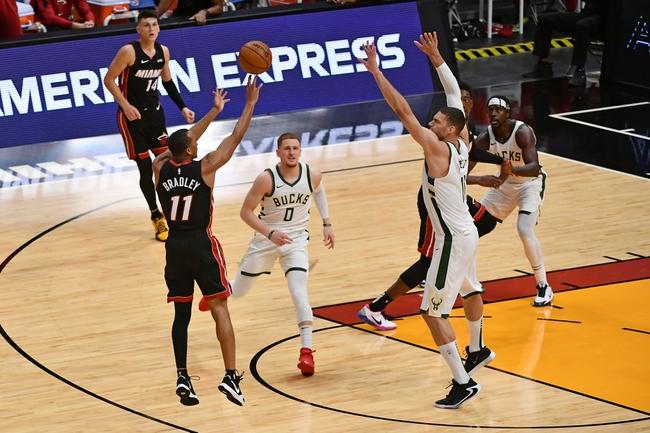 Wednesday saw the rematch of the aforementioned Heat-Bucks game, this time with Miami getting a measure of revenge last night’s game. Despite a triple-double from Antetokounmpo, who made 26 points, 13 rebounds, and 10 assists, it was the combined efforts of Tyler Herro, Bam Adebayo, Avery Bradley, and Goran Dragic to propel the Heat to victory.

The Atlanta Hawks and the Brooklyn Nets put on a high-scoring showdown in Barclays Center, which saw Trae Young and John Collins make 30 points each for the Hawks, while Kevin Durant made 33 points and 11 rebounds, Kyrie Irving with 25 points, Joe Harris making 23 points, and Jarrett Allen with a double-double of 15 points and 13 rebounds. Brooklyn would go on to win 145 to 141. The Lakers would bounce back from their loss on Monday with a win over the San Antonio Spurs 121 to 107. The Clippers continue their winning ways with a win over the Portland Trail Blazers 128 to 105. 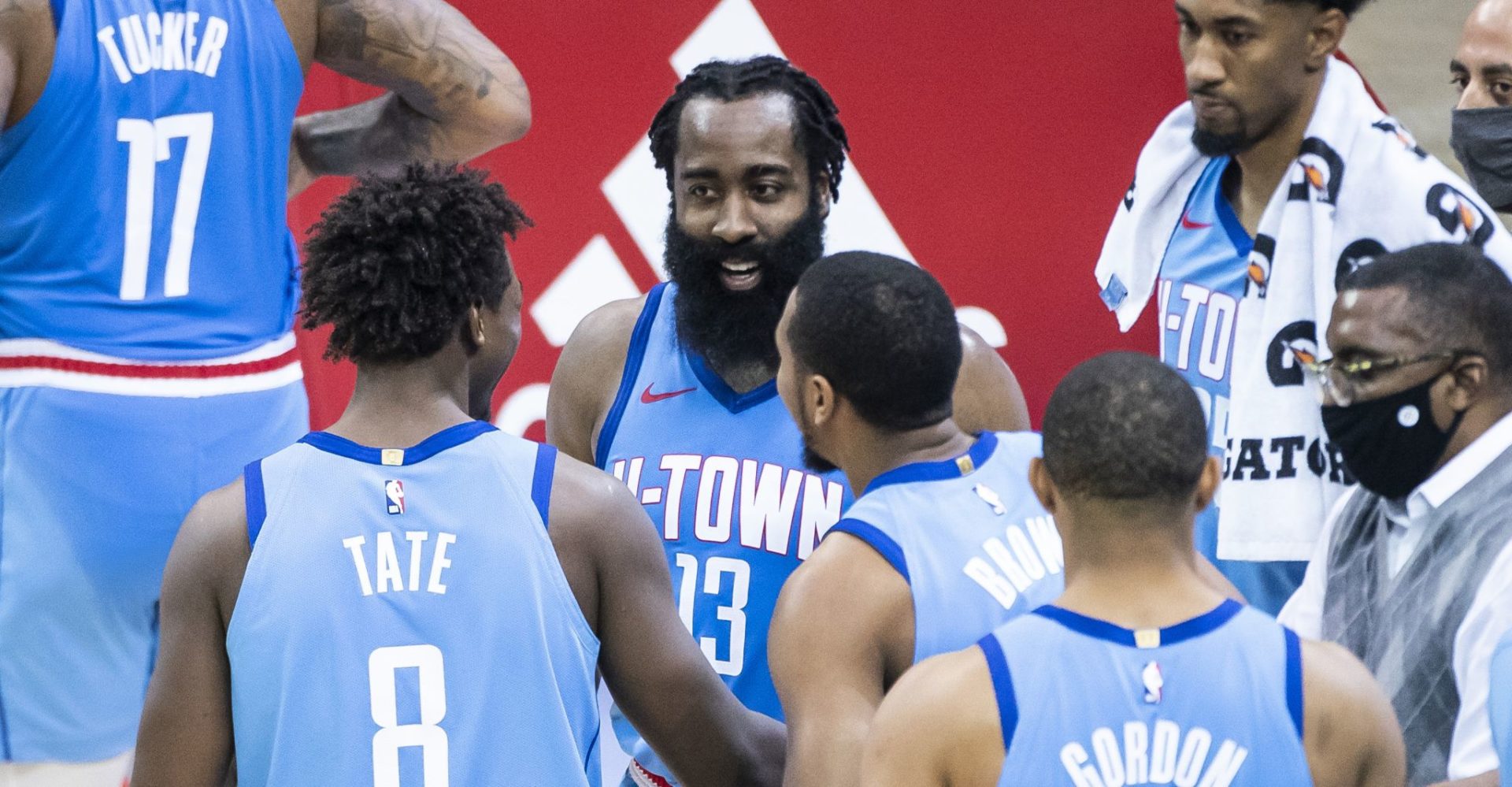 On Thursday, The Chicago Bulls and the Washington Wizards put on a high-scoring affair, which double-double performances from Coby White and Otto Porter Jr., plus 22 points from Zach LaVine for Chicago, while Russell Westbrook put on another triple-double performance to the tune of 22 points, 10 rebounds, and 11 assists for the Wizards. The Bulls went on to win 133 to 130.

The Philadelphia 76ers prevailed over the Orlando Magic 116 to 92 behind Joel Embiid and Seth Curry’s 21 point performances, plus 20 points from Tobias Harris. The Houston Rockets managed to secure a victory over the Sacramento Kings. James Harden had 33 points, John Wall with 22 points, and Christian Wood with a double-double of 21 points and 12 rebounds. The New Orleans Pelicans were victorious over the Oklahoma City Thunder 113 to 80. 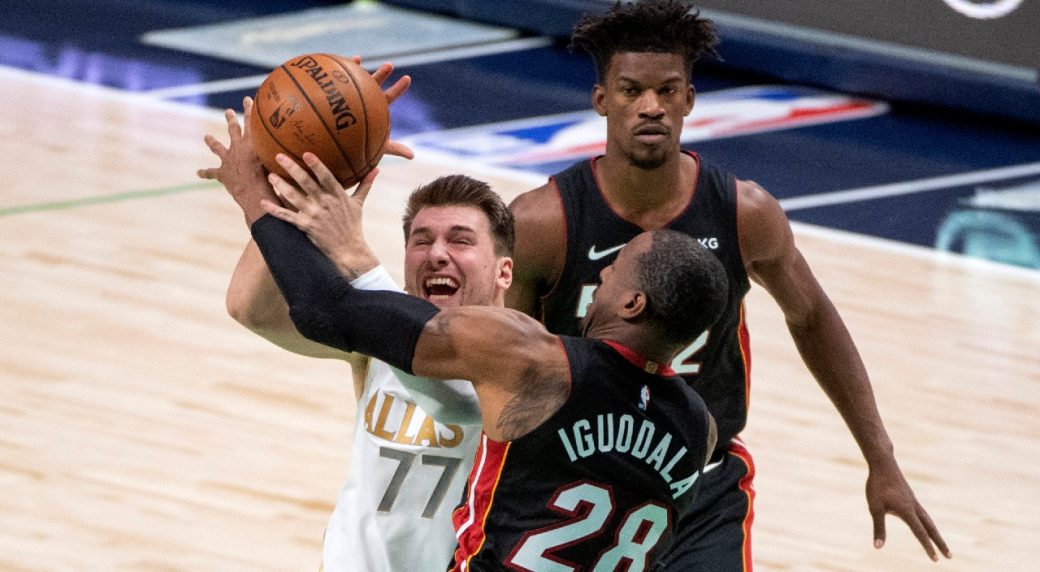 Friday brought in the New Year as the Dallas Mavericks hosted the Miami Heat. The Heat’s three-point shooting woes affected them greatly, while Dallas took the opportunity and knocked down jumpers and slash through the Heat’s defense. Despite a comeback from Miami, Dallas held on for a 93 to 83 win. The Milwaukee Bucks performed another blowout performance, this time against the Chicago Bulls in a 126 to 96 win. Giannis Antetokounmpo and Bobby Portis recorded a double-double each for Milwaukee.

Other games included a 96-93 win for the Detroit Pistons over the Boston Celtics, a 108-93 win for the Memphis Grizzlies against the Charlotte Hornets, and the Atlanta Hawks getting some payback against the Brooklyn Nets in a 114 to 96 win. 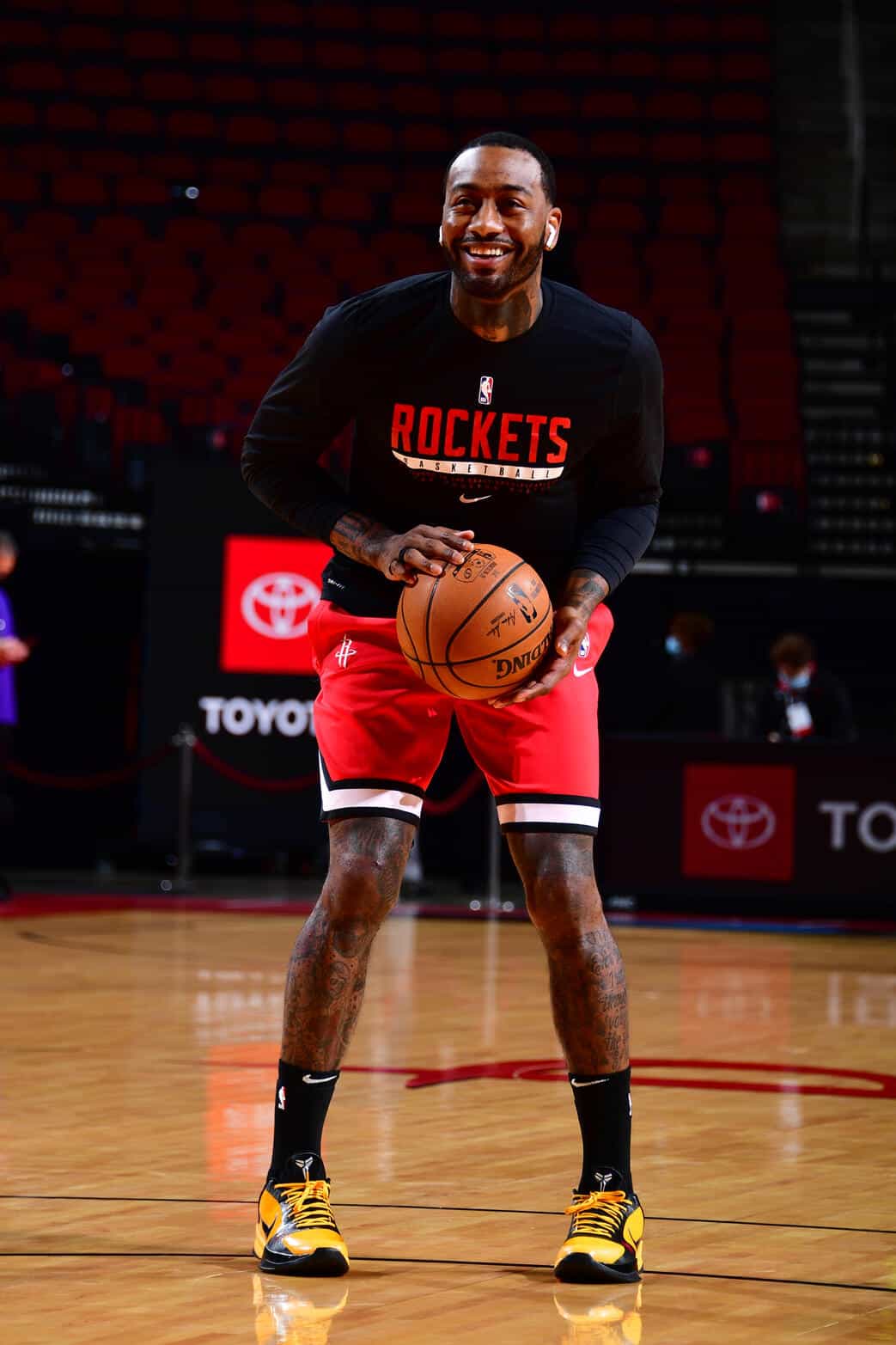 On Saturday, the Rockets were without James Harden, but they still managed to subdue Sacramento in a 102 to 94 win, led by John Wall’s 28 point performance. The New York Knicks prevailed over the Indiana Pacers in a 106 to 102 contest that saw R.J. Barrett make 25 points and Julius Randle with a double-double of 12 points and 11 rebounds. The Philadelphia 76ers continued their winning ways with a 127 to 112 win over the Charlotte Hornets.

Ben Simmons put on a triple-double performance of 15 points, 12 rebounds, and 11 assists, Joel Embiid with 19 points and 14 rebounds, and Tobias Harris with 24 points. Other games included the Oklahoma City Thunder winning over the Orlando Magic 108 to 99, the Cavaliers defeating the Hawks 96 to 91, and the New Orleans Pelicans over the Toronto Raptors 120 to 116.

And that was a recap of all that went down during opening week for the 2020-21 NBA season. There will be more notable games to be covered as the season progresses. 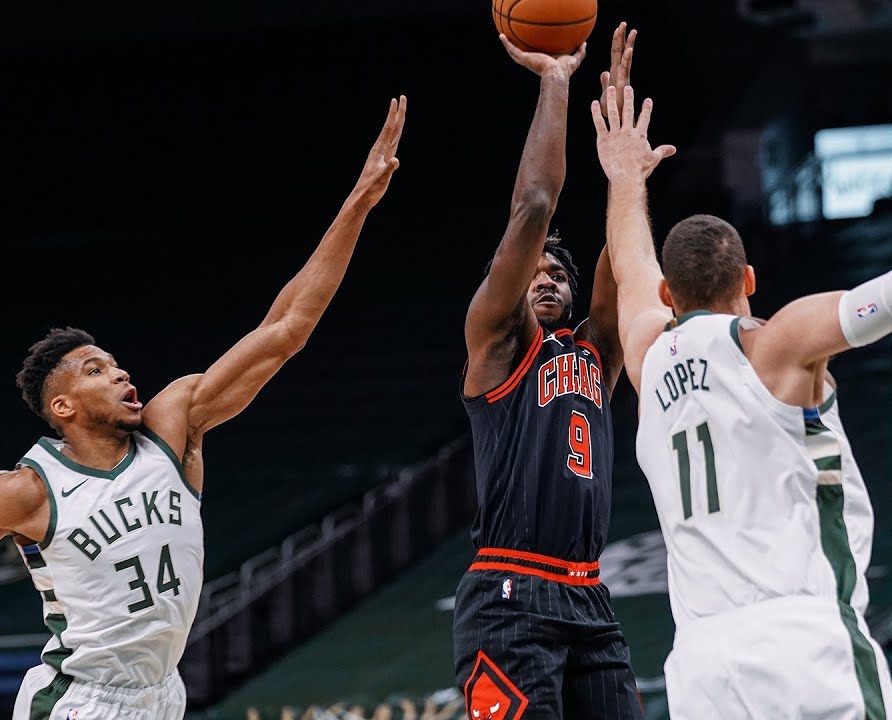