New Zealand won a close encounter against Australia today during their pool A clash at Eden Park, Auckland. Trent Boult’s 5 wicket haul reduced the Aussies to just 151. However, Mitchell Starc picked up 6 wickets in his 2nd spell and got Australia closer to victory before Kane Williamson snatched it away from them. The win enabled the Kiwis to stay at no. 1 of pool A as they are undefeated after 4 matches.

Earlier in the day, Clarke won the toss and opted to bat first. Finch and Warner were fired up as they smashed boundaries, picking up 30 runs from only 2.2 overs. Southee bowled Finch who scored 14 runs off 7 balls, hitting one four and one six. The early breakthrough did not help the Kiwis much as Watson and Warner built a 50 run partnership. Vettori was brought into the attack and he got rid off Watson(23) after Southee took a catch at leg side. 80-2 and it all went downhill from there for Australia.

Warner scored 34 off 42 balls, hitting two boundaries and a six and was posing a threat to the Kiwi bowlers before Southee dismissed him in the 14th over. Vettori dismissed in-form batsman Steve Smith(4) at 95 in the 17th over. Maxwell was only able to score 1 run before Boult bowled him in the next over. Marsh was also sent to the pavilion for a duck one ball later by Boult. 97-6 and it was starting to be a nightmare for Australia.

Clarke scored 12 runs from 18 balls, trying to rebuild the innings before Boult got rid of him thanks to Williamson’s catch at short cover. Boult was the hero again as Williamson took another catch at short cover and dismissed Johnson(1). Boult finished the over picking up the wicket of Starc(o). 106/9 after 22 overs and Australia were at the risk of being all out scoring their lowest total in world cup history.

But Haddin had other plans in mind as he smashed 43 runs off 41 balls, courtesy to four boundaries and two sixes. His last wicket partnership of 45 runs with Cummins(7) helped Australia past 150. Anderson removed Haddin after a catch by Latham  at short third man and thus brought an end to Australia’s innings at 151 from only 32.2 overs. Boult was the hero as he picked up 5 wickets giving away 27 runs.

Starting the run chase, Guptill and McCullum fired off from the beginning scoring 40 runs in just 3.5 overs. Starc dismissed Guptill after a catch from Cummins, ending their partnership. McCullum scored 50 from just 24 balls hitting seven boundaries and three sixes before Cummins dismissed him when Starc took the catch. 78/2 and New Zealand had an easy task of winning the contest from there.

But Starc had other thoughts! In the 9th over, he removed both Taylor and Elliot from back to back deliveries before being denied the hattrick by Anderson. Anderson and Williamson scored a 52 run partnership in the 5th wicket, steering clear from the danger. Spinner Maxwell provided the much-needed breakthrough for Aussies removing Anderson(26) after Cummins took the catch. 131/5 and it still looked an easy task for the Kiwis.

Clarke brought Starc to the attack again for one last bid to recover the game. It would prove to be very effective as he removed Ronchi(6) in the next over. Cummins removed Vettori(2) in the 22nd over picking up the 7th wicket of the Kiwis. Afterwards, New Zealand needed 7 more runs but had three wickets in hand. Starc made the task tougher for the Kiwis removing both Milne and Southee in the 23rd over, giving away just 1 run. 146/9 and it looked as though the Kiwis had succumbed to pressure and given away the victory.

With just 6 required for the Kiwis to win, Clarke sent Cummins in the 24th over. Kane Williamson kept his nerve cool and smashed a six from the first ball, leading his side to victory. 152/9 and the Kiwis won the thriller by 1 wicket. Williamson scored 45 off 42 balls, hitting five boundaries and a six. He ensured the victory of his side in one of the closest encounters of this tournament. Starc picked up 6 wickets giving away 28 runs and had almost snatched the victory for his team.

During the presentation ceremony, both the captains praised their bowlers for their superb performances. Clarke was critical of his side’s batting and remarked that it was a horrendous performance from the batsmen. Man of the match Boult said he was determined to pick wickets in his second spell but didn’t think he would pick up five! He also remarked that the Kiwis have worked hard for the past one year and were eager to win their upcoming match on Sunday against Afghanistan.

The win also hands New Zealand the Chappell-Hadlee trophy since their last victory in 2007. For Australia, it was a disappointing defeat as they went down to no. 4 in pool A. They will face Afghanistan on March 4 at Perth knowing that a win on that day would enable them to climb up the group standings. 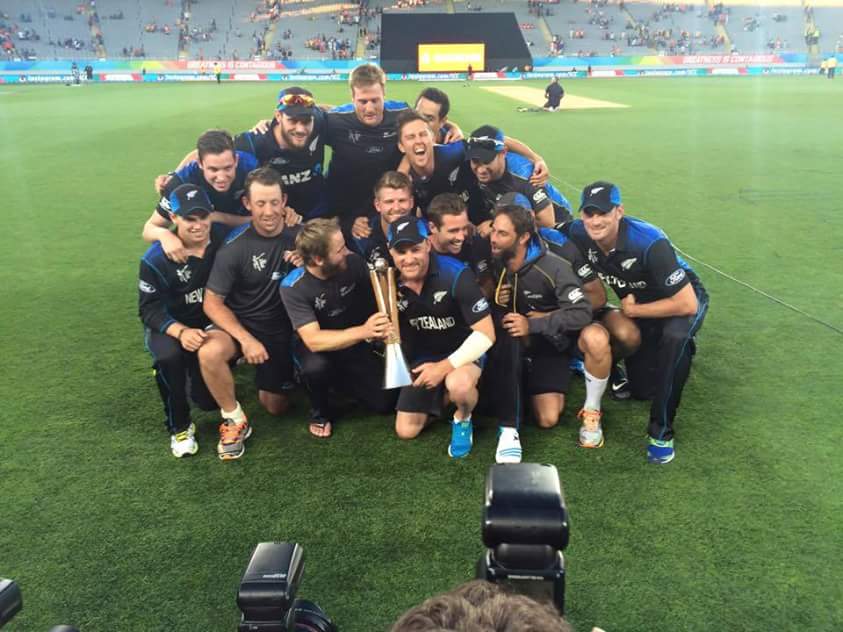