Drew Lock threw for 280 and 4 touchdowns as the Broncos hold off a late charge from the Panthers. Lock was proficient, completing 78% and spreading the ball out between eight different targets. Four receivers had at least three receptions, including Tim Patrick and Nick Vannett who scored touchdowns. KJ Hamler paced all Bronco weapons with 86 yards and two touchdowns.

Melvin Gordon led the Denver running backs with 91 all-purpose yards. Besides him, though, the backs did not have a lot of say in the final outcome.

Denver’s defense did, however, as they come up huge with a little less than three minutes to play. The Broncos just punted the ball to the Panthers, having failed to run out the clock on the previous possession. Carolina’s offense took over at their own 27. On the very first play, Dre’Mont Jones came racing through and put down Bridgewater for a six-yard loss. The next three plays featured some strong rush from the Denver DL and some clutch tackling by DeVante Bausby, as they turned over the Panthers on downs.

The thing that was most impressive about this series is that it came out of nowhere as Carolina had scored on its previous four possessions, reducing the Bronco lead from fifteen to five points. Though their game was far from great, the Broncos defense did come through in the clutch.

In defeat, Mike Davis had himself another strong performance, filling in for the injured Christian McCaffrey, again. Davis collected 93 all-purpose yards and scored two touchdowns.

Aaron Rodger was stellar, as he continues to make his case for league MVP. This time he spread 290 yards and three touchdowns around eight different receivers, with his top three targets hauling in at least five passes. Obviously, Devante Adams did what Davante Adams does, catching seven passes for 115 yards and a touchdown. Marquez Valdes-Scantling and Robert Tonyan also caught touchdowns, to go with their six and five-catch performances respectively.

The Packers ran for 120 yards and a score, as Aaron Jones paced the backfield with 75 all-purpose yards. It was Rodgers who ran for the touchdown, pushing his scoring total up to four.

Detroit also came out strong in this game, gaining 239 yards of total offense before halftime. Several long possessions, however, limited the halftime score to 14-14. Littles did they know, the second half would feature a different version of more of the same.

Green Bay had an impressive drive in the first half that took 7:01 off the clock, on the way to a touchdown. This was nothing compared to what they did through the third and early fourth quarters. The game really began to turn right after the Packers took the second-half kickoff.

After the touchback, the Pack started on their own 25-yard line. Then Rodgers went to work, chipping away at the Lions defense. Green Bay’s offense drove 90 yards over fourteen plays, taking 8:49 off of the clock. They capped the series off with a 6-yard touchdown run by Rodgers, all but deflating the Detroit defense.

To make matters worse, tight coverage and strong pressure put the Lions in a quick, three and out the situation. Stranding their defense on the field again.

On the next Packers series, they drove the field 79 yards on twelve plays, taking 7:49 off of the clock. The Lion’s defense was gassed as Green Bay took a 28-14 lead. Though the Lions did manage to score two more times, the Pack had already drained the life out of their chances at victory. The three drives of over seven minutes each, including sixteen and a half of the opening eighteen minutes in the second half, highlighted the Packers dominant, ball-control offense.

Tyreek Hill and the speed team excelled, as they dodged an early Dolphins lead and ran up the score in a Chiefs’ victory. Hill caught three passes for 79 yards and added another 32 yards on the ground, scoring two important touchdowns. Travis Kelce made his usual mark on this game, hauling in eight receptions for 136 yards and a touchdown. His touchdown was sandwiched between Hill’s and was Kansas City’s first lead of the game.

Patrick Mahomes was a little off today, or at least by his standards. He still threw for a day high 393 yards, but he “only” passed for two touchdowns, while throwing three interceptions. Mahomes did not allow these turnovers to hold him back, however, as he was dynamic when the game was on the line.

While we’re talking about turnovers, now might be the time to give a shout out to the Miami secondary, in defeat. Eric Rowe, Xavien Howard and Byron Jones contributed to all four Kansas City turnovers and helped the Dolphins take a 10-0 lead early and helped them come back after the Chiefs’ incredible run. And, yes, I realize the secondary allowed almost 400 passing yards, but they still had success against Mahomes that very little have had.

The Chiefs took control of and ran away with this game on the big play. A 32-yard touchdown run by Hill, followed by a touchdown reception by Kelce, overcame their early struggles to give them a 14-10 halftime lead. The second half led off with the 44 yard TD reception by Hill, immediately followed by a 67-yard punt return for a touchdown by Mecole Hardman. Chris Jones then tacked on a safety for good measure and the Chiefs had a 30-10 lead out of nowhere.

The Dolphins fought back valiantly, but when push came to shove and they came within one score, Kansas City added a late field goal for insurance.

Justin Herbert passed for 243 yards and two touchdown passes, leading the Chargers to a come from behind victory over the Falcons. He spread the ball between eight different receivers but really fed the ball to both Keenan Allen and Austin Ekeler more than anyone else. They hauled in nine receptions apiece, as Allen scored a touchdown. Tyron Johnson caught the other score along with 6 passes.

Ekeler paced all weapons with 146 all-purpose yards. His 79 rushing yards led the unit which ran for 105 all total.

Los Angeles’ defense was resilient, intercepting Matt Ryan on Atlanta’s final two series. The last pick was made by Michael Davis and set up a game-winning field goal for the Chargers. All total, the LA defense intercepted three passes, defended five, and sent six plays for negative yards.

In true Charger and Falcon fashion, no one seemed to want to win this game once the fourth quarter began. Both of these teams have been nightmarish in the final period, as neither could protect even the largest of leads it seemed. They entered the quarter 17-17, something had to give. Chargers punted after gaining seven yards. Falcons were intercepted. Then, LA threw an interception of their own. Finally, Atlanta said, “I insist”, throwing the second pick to Davis.

In Jalen Hurts first NFL start he threw for 167 yards through the air and ran for another 106 yards on the ground while delivering a victory over the NFC leading Saints. Hurts threw a touchdown pass to Alshon Jeffery, while spreading the ball around to eight different receivers.

The Philly rushing attack gained 246 yards on the ground, as it finally go back on track with the switch at quarterback. Miles Sanders led all backs with 136 all-purpose yards and two touchdowns, in his return to early season form.

In defeat, New Orleans quarterback, Taysom Hill enjoyed his best passing performance as a starter. He threw for 291 yards and two touchdowns while adding another 33 yards on the ground.

The Eagles defense came out strong in the first half, limiting the Saints to just 98 yards of total offense and turning them over once. The interception, by Duke Riley, set up a field goal for Philly.  A missed field goal from New Orleans and Philadelphia was able to go into the half with a 17-0 lead.

The Saints came out in the second half, knowing they had to fight to claim victory. They immediately did so on their first two drives, scoring a touchdown on each.

Philadelphia needed something to happen before New Orleans steamrolled them. And that they got at the start of the fourth. The Saints were driving yet again and it almost assuredly looked like they would be going up 21-17. They were nine plays and 48 yards into the series when the big play finally happened. Josh Sweat raced passed the offensive line and sacked Hill for a six-yard loss, forcing a fumble in the process. The fumble was recovered by teammate Javon Hargrave.

Philly took over the ball and Hurts led them 55 yards down the field for Sanders second touchdown of the game. These two series gave control back to the Eagles with a two-score advantage, ultimately allowing them to hold on for victory.

The Eagles grinded out a 24-21, upset victory over the Saints

Da Bears offense clicked for the first time in a long time, as David Montgomery returned with a 155 yard performance. Chicago’s defense was relentless as they swarmed for 13 negative plays, including 7 sacks, a score and a turnover.

Dallas Cowboys jump out early on the Cincinnati Bengals, coasting to a 30-7 victory

Cincinnati fumbled away the 1st quarter, as the Cowboys defense set the tone early with 3 turnovers in the period. Dallas scores 17 points off of those turnovers and never looks back

Tennessee Titans run all over the Jacksonville Jaguars, 31-10

King Henry runs wild to the tune of 215 yards and 2 touchdowns. The Titans coasted to 31 points by half way through the 3rd quarter.

The Cardinals defense put the clamps on the Giants, limiting them to 223 while turning them over 3 times. Haason Reddick was especially dominant with 3 forced fumbles and 5 of the team’s 8 sacks.

The Vikings missed 4 kicks, leaving 10 points off the board, while fumbling away their final drive. The Bucs take advantage of Minnesota’s folly with solid play, taking 23-6 lead in the third. Tampa Bay played a solid game as a team.

Indianapolis Colts explode all over the Las Vegas Raiders, 44-27

Jonathan Taylor and the Indy rushing attack run wild for 212 yards and 2 touchdowns. The Colts defense tallied 3 turnovers, including a pick 6 from Khari Willis, taking a 24 point lead with 7 minutes left.

The Seattle defense held the Jets to 201 yards, including just 20 in the second half. Led by KJ Wright they forced 10 negative plays and a turnover. New York also missed 3 field goals in the first half, on their way to an 0-13 record.

Washington’s defense limited the 49ers offense to 206 total yards, turned them over 3 times and scored 2 touchdowns. Chase Young and Daron Payne were both monsters in the Washington front four, as the game was not nearly as close as the final score indicates 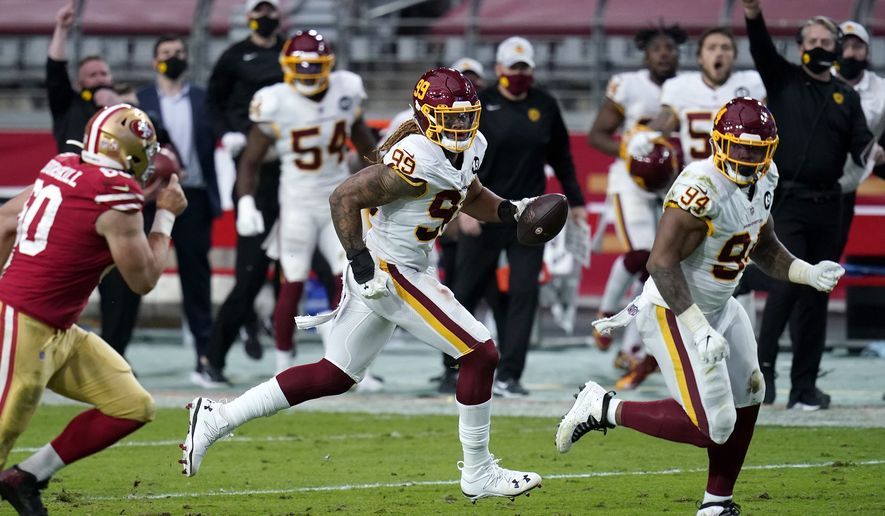