In a tumultuous turn of events in the sports world on Wednesday evening, the NBA postponed all three of their playoff games.  Players from the Milwaukee Bucks chose not to play their game versus the Orlando Magic due to the shooting of a black man by a white policeman this past Sunday. While this event sparked outrage by many players in the league, the trickle-down effect was felt across other professional sports leagues in the US. Three WNBA were postponed.  Three MLB games also were not played.  And five games were postponed in the MLS.  The NHL had three games on their docket and went on with business as usual. On Thursday, the NHL reversed course and decided to postpone games along with other league sports across North America.

The NHL took a major step forward by postponing games for two days.  It all began by taking a “moment of reflection” before the faceoff of the game between the Boston Bruins and the Tampa Bay Lightning.  It was not a good look for the league.

Matt Dumba, a defenseman with the Minnesota Wild, is a player of colour and the founding member of the Hockey Diversity Alliance. This week he interviewed with a radio station in Vancouver was quoted as saying “The NHL is always late to the party, especially on these topics, so it’s sorta sad and disheartening for me and other members of the Hockey Diversity Alliance, and I’m sure other guys across the league But if no one stands up and does anything, it’s the same thing — it’s just that silence that you’re just outside looking in on actually being leaders and invoking real change when you have such an opportunity to do so.”

Evander Kane, a forward with the San Jose Sharks, is one of the few Black players in the NHL.  He too has been frustrated and disappointed with the lack of action taken by the league when it comes to social issues. Speaking to Sportsnet Television in Canada.

“I’ll be honest, I haven’t really heard much in regards to Jacob Blake’s attempted murder. It’s unfortunate, we’re obviously talking about another Black man unarmed being shot in the back in front of his children.” But again, we had these conversations earlier with the George Floyd killing of continuing the conversation, furthering the conversation, everybody wanting to be better and making sure that we’re more vocal and we do better moving forward. Here’s another example, unfortunately, but it’s also another example of the lack of with regards to our league and our players and our media that cover our game.”

Canadian journalist and television broadcaster Julian McKenzie who covers the NHL for various outlets brilliantly expressed his displeasure with the league’s silence on these matters. “Players like Kane and Matt Dumba have been left to make statements and voice their displeasure alone. Hockey, a sport in which its “team-first” dynamic has been praised and commemorated, has mostly left its minority players to protest on their own with little support. Frankly, it’s cowardly of the NHL to do so.

Within less than 24 hours, the NHL went from reflection to response.  The elephant in the room was finally being addressed.  New York Islanders head coach Barry Trotz described the unified front that was beginning to form involving the four Eastern Conference playoff teams on Thursday.

“I was actually just outside our coaching room and you saw 30 or 40 players together. All from different teams, all who maybe the night before or hours leading up to that would have been on the ice going nose-to-nose gathering around and trying to come up with solutions and understanding and being very supportive. When you look back at that, those are powerful moments that you sometimes don’t recognize because of the bigger picture that’s not even evolving yet.”

While postponing games for a couple of days isn’t going to ultimately change minds or move hearts toward full racial harmony across the United States, the NHL is starting to do its part to keep the conversation going. Tampa Bay Lightning defenseman Kevin Shattenkirk, who is a Caucasian American told the Associated Press.

And Philadelphia Flyers head coach Alain Vigneault echoed a similar sentiment. “”I never bothered to ask or check with anyone what was going in the world or the NBA. I am guilty of that, I am guilty of not checking up on what was going on in the world and the NBA. But I am a good person. I believe in equality. I believe in social justice. I want to be part of the solution. I want to help society in any way I can.”

A couple of days ago, I saw the NHL as a league who simply didn’t get it when it comes to fully understand the race issues in the United States. Within the league, the community of players, coaches, management and even media are mainly White Canadian and European, so perhaps there is a disconnect with relating to the oppression that Blacks have dealt with.  The NHL may have come late to the party, but now is their opportunity to make a statement by continuing the conversations. 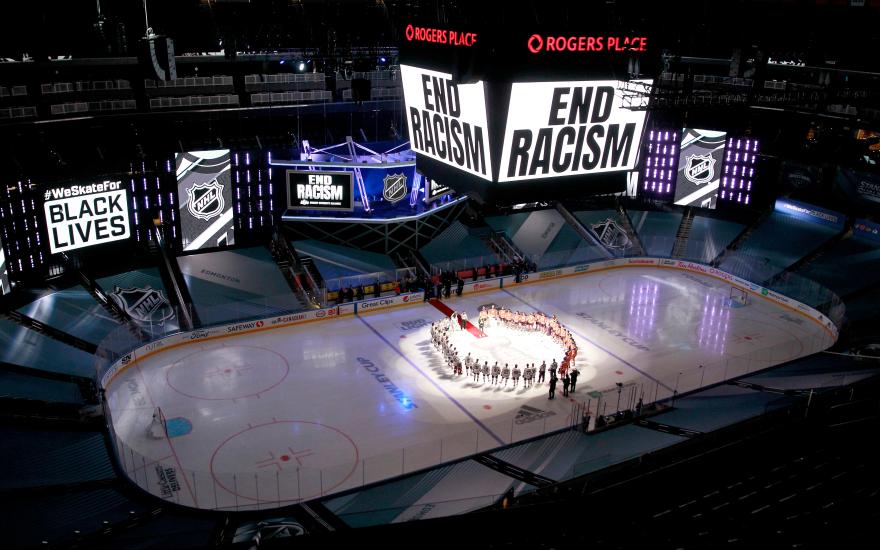