The first couple fights on a prelim card for a fight night get overlooked a lot. And I understand, there’s no title implications, no top contenders, and unless you have Tuesday off of work to watch every Dana White’s Contender Series and take notes, there’s going to be some fighters you’ve never heard of.

But I’m here to use UFC Vegas 8 as a perfect example of why those things sometimes add up to give us some of the best fights of the night. You like submissions? We’ve got ‘em, three of them to be exact, in the first three fights of the afternoon (let’s be honest, this is early enough that the sun is still beating down in late August, it’s not quite fight night yet).

The first fight of the evening was a combo platter, bringing not only our first submission but an impressive comeback from the eventual winner as well. Mallory Martin (6-3 and a heavy -300 favorite at the start of the fight) took on Hannah Cifers (entering at 10-6 and coming off a tough loss to Mariya Agapova) at strawweight. After a half round consisting of brief flurries of stand up kickboxing, the underdog Cifers took Martin down and really beat her up on the mat for the rest of the round, with the ref almost calling a stop to the fight several times.

I mean she was really going to work down there. They made it to the bell however, and in round two Martin came out swinging, bringing Cifers over to the fence for a takedown, followed by some huge elbows on the ground. And then just like that, Hannah Cifers had given up her back and was tapping to a rear naked choke. An edge of the seat fight from start to finish.

Out second bout of the prelims was also in the women’s strawweight division, featuring Polyana Viana (entering 10-4) taking on Emily Whitmire (entering 4-3). It seems the oddsmakers weren’t sure who was going to take this fight, but they were going to find out very quickly.

After some light kickboxing, Whitmire successfully took her opponent down, but was immediately met with heavy elbows coming from the bottom guard of Viana. These elbows were not the main focus however, as Viana was using them as a distraction to position herself for an arm bar, which she immediately utilized to great effect, seeing Whitmire tapping almost immediately to end the fight.

The third fight of the evening seemed a foregone conclusion in Vegas, finding the -450 favorite Sean Brady (entering 12-0) taking on Christian Aguilera (entering 14-6) at welterweight. Round one featured mostly stand up kickboxing, with Brady using some big left hands to open a cut above his opponent’s eye, and heavy leg kicks to chop at his base. With about a minute left in the first round, Brady took Aguilera down and smothered him against the fence to coast to an easy 10-9 round.

In the second round, Aguilera seemed unphased, landing a couple nice shots including a big left hook. Under a minute into the round however, Brady lept through the blows for a takedown, immediately followed up with punishing elbows on the mat. After one submission  attempt slipped away, Brady sank in a mounted guillotine choke deep enough to put Aguilera to sleep, with the ref stopping the fight promptly.

These were the first three fights of the evening. I was glued to my seat for the entirety of these fights, and I think prelim fighters getting big wins deserve more attention. If I’m being perfectly honest the quality of the fighting dipped a little after this, until we got to the main event of the evening.

Whether or not I’ve helped to convince you to tune in at 5 instead of 7:30, there is one thing that we can take away from cards like this, and that is that the UFC has a deep stock of global talent that is constantly growing, and we’re lucky to be here for it. 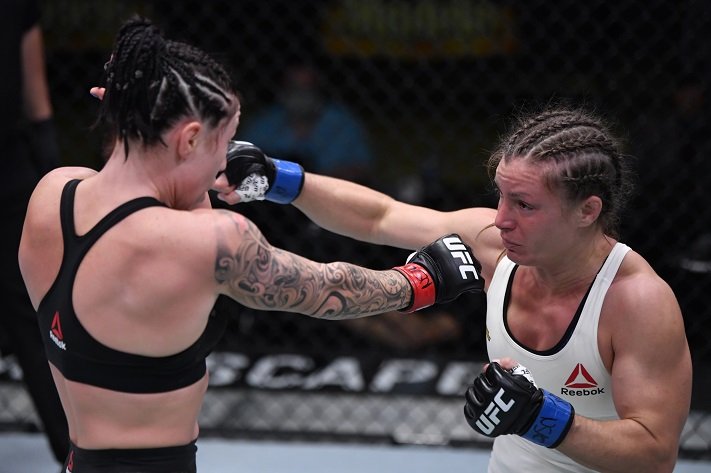