Overview: Aside from the Mets and Nationals, this was one of the worst divisions last year. Come September it was a two-team race and even that wasn’t really a close race. The rebuilding of Miami was in full affect, the Braves had a terrible season, Philadelphia became a seller at the deadline, and the Nationals had a monumental collapse that can be summed up by two of its superstars, Closer Jonathan Papelbon and 2015 NL MVP Bryce Harper, attack one another in the dugout after Harper arrogantly refused to run out a pop-up.

This blew the door wide open for second-half wonder New York Mets, who after trading for several talented relief pitchers, reliable utilities, and superstar Yoenis Cespedes, took the NL East and the league by storm. So what’s going to happen in 2016 for these Atlantic teams. Let’s see:

Philadelphia: I’m going to start with the worst, the Phillies. Now Philadelphia has not had good teams in the last couple of years, not seeing a team make the playoffs since the Philadelphia Flyers of the NHL in 2014. At the deadline this past season the Phillies traded starting pitcher Cole Hamels, closer Jonathan Paplebon, and outfielder Ben Revere in separate deals, as well as trading life-time Philly and 2008 and 2009 World Series superstar Chase Utley to Los Angeles, surrendering all hope for a 2015 October showing.

And quite frankly they’ve had a quiet off-season. Its time for Philly to fully commit to a rebuild. With both Washington and New York major threats, Philadelphia has little to no chance in this writers opinion at having any better chance of making it this October, either.

I believe to fully commit to this rebuild the Phillies the must trade Ryan Howard. Now being old, expensive, and a free-agent to-be, the Phillies will have trouble trading him, but I guarantee they will have plenty of suitors come the 2016 trade-deadline. While nothing’s set in stone, expect the Phillies to once again be a seller in 2016.

Atlanta: The Braves are another NL East team ready for a rebuild. After only being better than last place Philadelphia by 4 games, Atlanta must realize the team they have is not good enough to win in this division. In July Atlanta traded veterans Kelly Johnson and Juan Uribe to divisional rival New York, and in the off-season they traded center fielder Maybin and starter Shelby Miller in separate deals.

Now is their upcoming season doomed? I don’t know, all I know is that Freddie Freeman, 25, isn’t going to be able to carry this team to October on his own and who else is available to help him? Realistically, no one, no one good enough. Atlanta will just have to swallow its pride, trade the few veterans they have left and realize they have just as much of a chance at an October showing as Philadelphia.

Miami: Miami came into last season with little chance of making a statement and actually managed 70 wins and third place in the division. Miami comes into this season with a better chance than they had last year that’s for sure. They added to management in a big way, hiring Don Mattingly as the manager and Barry Bonds as the hitting coach, which I will give my 2 cents on momentarily. They still have legend Ichiro, who as long as he’s breathing, is a great player to have in one’s batting order. They also have ace Jose Fernandez and former 37 homerun hitter, Giancarlo Stanton.

As a Met fan I don’t like Miami in the least, but I won’t be completely bias. To say Miami has no chance at at least making a splash would be very one-sided and close minded. I don’t see them making the playoffs but I don’t see them being the face of mediocrity in NL East like they have been for over 5 seasons.

Lastly, I would like to talk about the abomination that is Barry Bonds. Now on one hand he is a good contact hitter, PEDs don’t help you with contact. On the other hand he is a disgrace to the sport of baseball and one I am saddened to see still in the lime light. This signing seems more of a publicity stunt than anything else and quite frankly its laugh-worthy.

Washington: What a disappointment the Nationals were in 2015. This team came into the season with the potential of reaching 100 wins. They ended up being barely .500 and were riddled in controversy and inconsistency. They started the season great; it was a one team show in the NL East headlined by Bryce Harper and the Washington Nationals. Coming into the season they stole SP Max Scherzer from Detroit, adding to that trend after signing SP Doug Fister the season prior.

They brought in Yunel Escobar at third, so that was a nice addition. Come the deadline, they snatched up CL Jonathan Papelbon from Philadelphia. Everything seemed to be going good for Washington. Then something happened. It’s hard to place your finger on it but Washington just collapsed. Can it be attributed to the injuries of key players like OF Jayson Werth, first baseman Ryan Zimmerman, and ace Stephen Strasburg who was limited to only 127 innings? Maybe they were overconfident as the entire first half of the season belonged to them. But for whatever reason they failed to make the 2015 playoffs after much hype.

They missed out on the NL East Title by 7 games and weren’t much closer at grabbing a wildcard spot from Chicago or Pittsburgh. Fast-forward to the post-season and things got off to a shaky start. Detroit finally got revenge for Fister and Scherzer and signed SP Jordan Zimmerman. They also traded Drew Storen and Yunel Escobar in separate off-season deals. Then they lost another starting pitcher, in Doug Fister, to Houston. But the Nationals did not fall apart, they signed playoff darling and homerun record holder, Daniel Murphy and almost signed Yoenis Cespedes.

Which would have destroyed the Mets, losing their best playoff performer and their best regular season performer. They also signed Stephen Drew and traded for Ben Revere. Had they gotten Cespedes from under New York’s nose I’d argue once again that they had the potential for 100 wins this season, but they certainly have a chance at making the playoffs without him.

New York: What a contrast the Mets’ season was compared to Washington’s. The Mets went into this season with potential but their hitting was among the league’s worst throughout the entire first half. Free agent signing Michael Cuddyer and franchise third baseman David Wright went down with injuries early leaving holes in the Mets’ batting order. By early July you couldn’t look at their batting order with laughing or crying, depending on your affiliation. The only reason they weren’t terrible and out as early as June was because of their tremendous starting rotation.

The rotation, even without Zack Wheeler (Tommy-John surgery), boasted great numbers behind the greatness of the Tommy-John returning Matt Harvey, reigning NL Rookie of the Year Jacob deGrom, and rookie Noah Syndergaard, as well as strong performances at times by veterans Bartolo Colon and Jon Niese, and eventually mid-year rookie sensation Steven Matz.

Add in the remarkable pitching from CL Jeurys Familia, who replaced two-time loser Jenrry Mejia, and New York’s pitching kept them in every game despite the dismal hitting. But it was late-July in which everything turned around. Though I think he’s a patsy for the evil Wilpons, Sandy Alderson proved to be an incredible general manager. He traded for the likes of 2B Kelly Johnson, 3B Juan Uribe, RP Tyler Clippard, and RP Addison Reed.

The most notable signing had to be acquiring outfielder Yoenis Cespedes from Detroit. Now that trade almost didn’t happen as the plan was to get Carlos Gomez for the likes of the injured Wheeler and SS Wilmer Flores, but after a premature announcement at a Met game, a visibly heartbroken Flores, and a questionable physical the deal fell through and at the last second of the deadline the Mets got Cespedes.

Then everything fell into place as Cespedes took the reigns straight to October as Wright and Cuddyer returned and the starting rotation remained hot. The Mets made the World Series but lost in 5, but don’t let that number fuel you the Mets led every game that they lost until the late innings. They would go onto lose Murphy to free agency, Niese via trade, and Cuddyer to retirement. However, they signed Asdrubal Cabrera to replace an injured Flores at short, traded Niese to Pittsburgh for Neil Walker to replace the departing Murphy at second, re-signed Colon, and shockingly re-signed Yoenis Cespedes in late January.

So coming into this season the Mets are poised to take the division again. Unlike last year this season will prove to be a two-team race in the NL East headlined by the Washington Nationals and then NEW YORK METS! 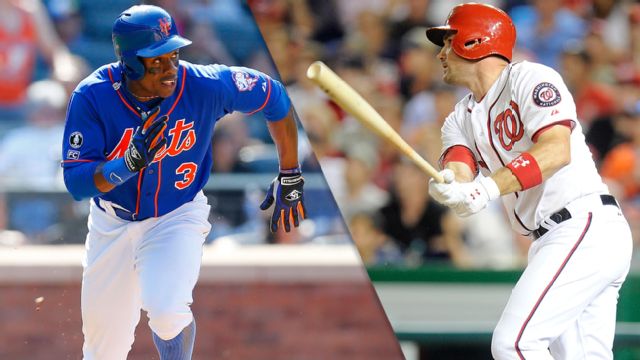