All eyes were on eligible Queensland and New South Wales representatives as the NRL celebrated indigenous heritage and culture in Round 12. With the first State of Origin match to be played in just over a week, the recent wave of injuries and suspensions has opened the door for some players to make their tentative debuts for their respective states.

Selectors haven’t been the only ones experiencing headaches: A COVID-19 outbreak and subsequent lockdown in Victoria forced the NRL to move the Origin opener from the Melbourne Cricket Ground to Queensland Country Bank Stadium in Townsville. It also means the Melbourne Storm will be temporarily relocated to the Sunshine Coast again after spending most of last season there.

On the field, there was a noticeable reduction in the number of sin bins handed out this round, and an ongoing lack of consistency leaves confusion over what is and isn’t a sin-binning offence. It was another mixed bag of results as the Tigers clicked together, the Broncos collapsed again, and the Cowboys and Knights won at home in close contests.

The Brisbane Broncos looked to be carrying over their surprise form from last week as they launched a strong early attack against the Melbourne Storm. However sloppy passes and a steely Storm defence cost the Broncos dearly as Melbourne launched their own blistering attack.

Brandon Smith and Nicho Hynes were in hot form again, the former’s double bookending the Storm’s slew of points while Hynes set up two tries and scored one of his own. Most of the damage was done in the second half as Brisbane’s Anthony Milford had one of his worst performances at five-eighth so far this year. Payne Haas also had an unfortunate night after a knee injury raised concerns over his fitness to play for NSW. The Broncos could only muster two tries in the end against the Melbourne point-scoring juggernaut.

The Storm will be missing Cameron Munster and Harry Grant for another week at least, the two expected to appear for Queensland following their respective injuries. Melbourne’s home game against the Titans next week has been moved to the Sunshine Coast.

In their second meet-up in a month, North Queensland looked set to run away with the victory this time around. Despite conceding a very early try to Euan Aitken, the Cowboys enjoyed a dominant first half kickstarted by both wingers.

The halves took them to a comfortable half time lead, Jake Clifford chasing his own kick to score before Scott Drinkwater ran 50 metres for the line. Fortunes changed afterwards as the Warriors piled on 22 consecutive points, including a 90m effort by Reece Walsh that was almost saved by fellow youngster Heilum Luki. They’d held the lead for ten minutes before Hamiso Tabuai-Fidow evened the scores back up.

Valentine Holmes saved the day for the Cowboys with an impressive long-range field goal, his second matchwinner of the year.

Wests Tigers’ shake-up of their right edge worked a treat, with James Roberts scoring a double against St. George Illawarra in his first game on the wing in eight years. Their spine players also had a memorable night with Moses Mbye settling into five-eighth and the young fullback Daine Laurie starring throughout.

The Dragons’ slump continued despite some glimmers of hope, which themselves were few and far between among the ample opportunities they had. They wouldn’t score until shortly into the second half when Brayden Williame took advantage of a Tigers fumble in their own in-goal. But Wests continued to keep them on the back foot, leading by 28 at one point.

St. George claimed the final two tries but with several key players still out for some time yet, the best days of their season look far behind them.

A surprisingly dogged defence from Canterbury-Bankstown kept the Penrith Panthers to four points for most of the first half. The clear ladder leaders were expected to steamroll the cellar-dwelling Bulldogs but struggled to establish momentum early on.

A wild offload from Canterbury’s Dallin Watene-Zelezniak handed the Panthers a try on the stroke of half time and some extra breathing space. It was in the second half that they then found their groove and piled on another four tries. The Bulldogs did come away with some points, Adam Schoupp scoring his first try in the left corner shortly before full time. But the Panthers machine continues rolling, with 12 from 12 so far this season.

Penrith’s big challenge lies in making it through the Origin period. Their perfect start has earned seven Panthers a place in the Game I squads, which will leave the team severely under-strength against Wests next week.

After a horror few weeks, South Sydney bounced back in style against Parramatta with Damien Cook scoring in the first minute from a scrum. That set the tone as the Rabbitohs ran through the Eels all game.

Alex Johnston and Dane Gagai were Souths’ only other tryscorers, but both claimed a hat-trick each to re-establish the Rabbitohs’ title hopes. Parra had plenty of their own tries in them but suffered from a weak defence that allowed 12 line breaks from the Bunnies. Both clubs, however, had a hard time discipline-wise: South Sydney’s Cody Walker and Cam Murray and Parramatta’s Nathan Brown and Ryan Matterson went on report for varying instances of dangerous conduct.

The Rabbitohs will enjoy their bye next week while Parramatta prepares to face Newcastle.

The Canberra Raiders had a strong start against the Sydney Roosters on the Central Coast, with Josh Hodgson and Corey Horsburgh both finding the line. But Sydney hit back to lead by six at half time.

From there, the second half blues bit the Raiders again as the Chooks piled on the points. Joseph Manu had an impressive showing at five-eighth, scoring two and helping Sitili Tupouniua to another. Ryan James helped Canberra chase the possibility of a comeback but they had nothing else in them as they suffered their worst defeat yet.

It capped off a tumultuous week for Canberra after a wave of controversy surrounding the Raiders’ release of George Williams.

The Cronulla Sharks performed swimmingly at Coffs Harbour for Shaun Johnson’s 200th NRL game. Gold Coast’s only two tries of the match bookended a flurry of points from Cronulla, whose charge was led by Johnson and his halves partner Matt Moylan.

Despite the promise shown by the Titans’ early try to Brian Kelly, Cronulla wiped them off the park in virtually every part of the field. The 38 consecutive points included one try off a crafty flick pass offload from Will Chambers. Both clubs had their troubles with discipline with two sin bins each.

The result is hugely disappointing for the Titans, who are now at risk of falling well out of top eight contention. Their hopes could be further derailed as they prepare to take on the Storm with an undermanned forward pack.

Manly were expected to win convincingly over the Newcastle Knights, and were on track to do so with the first two tries. But Newcastle fought back before half time with Starford To’a in the corner and Sauaso Sue busting through the middle.

A missed conversion from Manly’s Reuben Garrick was all that separated the two heading into the second half. What followed was a 37-minute deadlock characterised by a hefty 9-1 penalty count against the Sea Eagles. Despite this, Manly fought to the end, and it wasn’t until Daniel Saifiti crashed through the middle in the 77th minute that the Knights had consolidated a hard-earned win.

The Sea Eagles shouldn’t be too shaken by the upset, and will enjoy a bye before taking on the Cowboys. Newcastle meanwhile must prepare straightaway to face off against Parramatta. 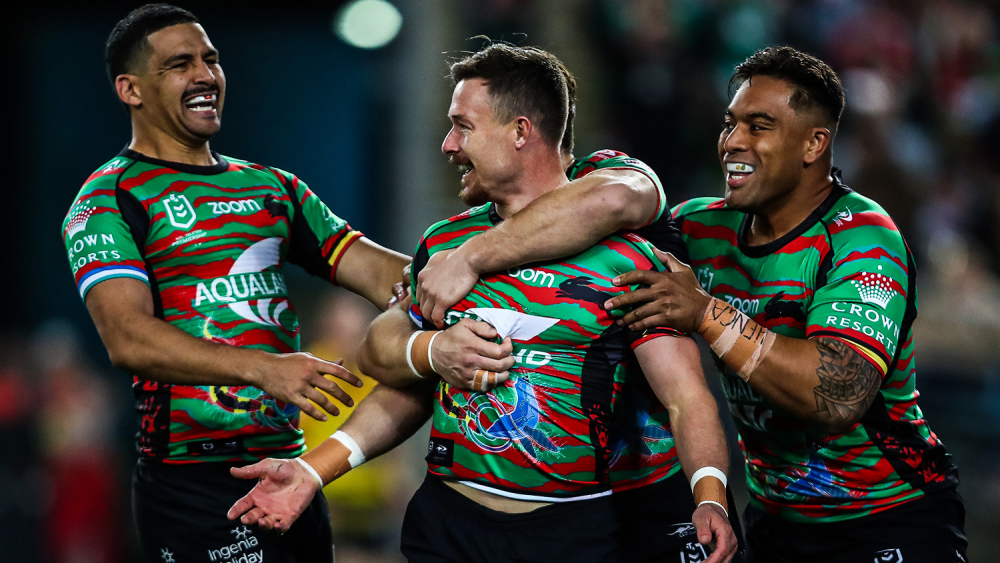