Two cultures with historic ties to rugby league met on the traditional land of the Bindal and Wulgurukaba people with two high-intensity matches to welcome the game into 2021.

These were the men’s and women’s NRL All-Stars matches, the concept in its third iteration as a clash between the NRL’s finest players of Indigenous Australian and New Zealand Maori heritage. They’ve become popular spectacles most notable for the passionate war cries of the respective competitors.

First up was the women’s match, a one-sided affair in the Maori favour despite not being able to field their New Zealand based players as a consequence of COVID-19 restrictions. What they could field more than made up for it with plenty of well-coordinated passing. The Indigenous team, in spite of a brutal defensive effort, found themselves on the back foot from the start with several errors.

The Maori first took advantage in the third minute as a Zahara Temara grubber rebounded off the goalpost into the try-scoring area before Raecene McGregor picked it up. They made their next few charges down their left edge where the Indigenous defence was stretched, and while a few errors kept them from getting too far ahead early, it helped them to a 12-0 lead just over ten minutes in.

Several key Maori players including Temara, McGregor and hooker Nita Maynard set the platform and led the charge throughout, while the remainder combined strongly to keep momentum especially in the first half. The Indigenous rarely had an opportunity at the try line and squandered their opportunities with small mistakes.

While McGregor didn’t see out the full game after a hard hit saw her walked off the field with eight minutes to spare, she had already had a strong share in the damage on the scoreboard with her second try coming off a forced error. Jaime Chapman and Leticia Quinlan put in some of the best efforts in attack and defence respectively for the Indigenous, however the team as a whole lacked the coordination to put pressure on their opponents.

Some tough tackles on the Indigenous part helped keep the margin down, but the Maori would still run away with it 24-0 to claim their second women’s title.

A far more intense affair was the men’s game which followed shortly after, which would come to one of the more bizarre endings in recent years. Aside from the club trials, this game serves as the men’s only major pre-season fixture before the NRL regular season kicks off in March.

As opposed to the one-sided flogging from earlier, the men played out a hard and tight slog that at times turned into a push-and-shove show. The scorers went untroubled for the first twenty minutes, and the first half saw only a Jamal Fogarty penalty goal after the Indigenous halfback was taken out without the ball. The Maori had made a few unsuccessful attempts at the tryline earlier.

Both sides found themselves slapped with 10-minute sin bins: The first handed to the Maori’s Zane Musgrove for a shoulder charge against Tyrell Fuimaono in the 35th, before the Indigenous team lost Tyrone Peachey in the 58th after he illegally knocked down Charnze Nicoll-Klokstad prior to a 20-minute restart. By that time the Maori had already broken the deadlock with Jordan Riki having powered through several defenders.

Their lead strung out to eight before the Indigenous mounted their own comeback. Alex Johnston cleanly took a grubber kick from Latrell Mitchell to bring them within a penalty goal of tying. The twist being that a penalty goal was all that would come after.

With two minutes left and the Indigenous a metre away from the tryline, James Fisher-Harris corrupted the Maori defensive effort by tackling Jack Wighton at dummy half without the ball, conceding a costly penalty. Indigenous captain Cody Walker decided his team would take the penalty goal to tie, later saying he believed there would be golden point extra time. But without the extra time and a successful penalty kick from Mitchell, both teams would share the trophy.

A thrilling beginning for rugby league in the new year. 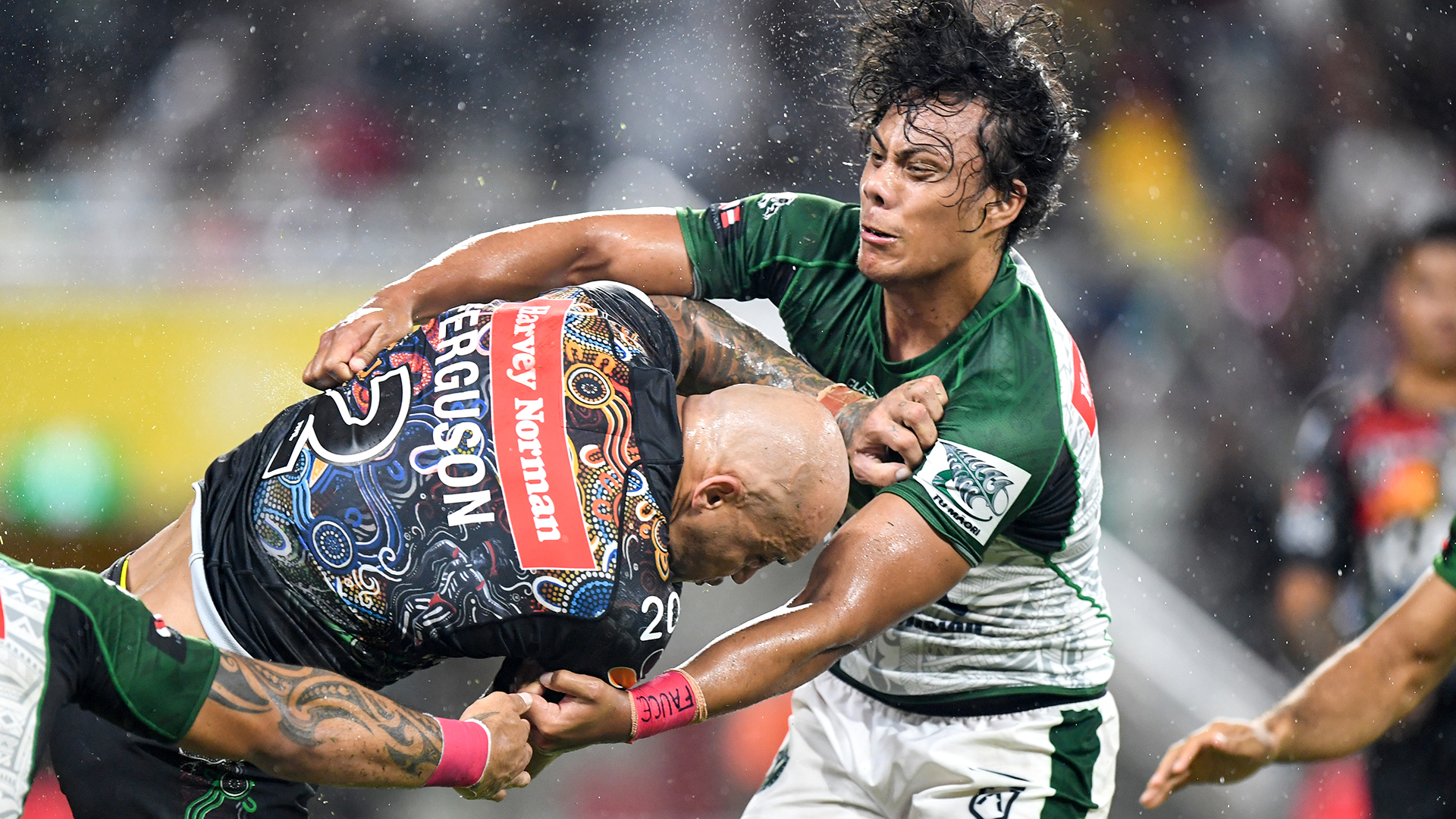