New South Wales’ Tom Trbojevic and Latrell Mitchell proved lethal in the centres as the Blues smashed the Queensland Maroons 50-6 in State of Origin Game I.

The Blues weren’t fazed by a mostly Maroon crowd of 27,533 at Townsville’s Queensland Country Bank Stadium – where the match had been moved from the MCG after a Covid-enforced lockdown in Melbourne – as Trbojevic scored a hat-trick and Mitchell a double in their largest ever Origin victory.

The game had much more of an arm-wrestle beginning with a penalty goal being the only points in the first 15 minutes. Maroons captain Daly Cherry-Evans gave the penalty away for an escort that blocked Trbojevic from competing in a kick-return.

Fifteen minutes in, the Blues kicked into gear as Latrell Mitchell charged 40 metres down the left side, before Trbojevic claimed the first try of the night a minute later.

“Turbo Tom” was destructive all over, managing to cover both sides of the field and several roles throughout. However, he’d proven too destructive at one stage, accidentally causing a cut to teammate Nathan Cleary’s cheek with an unlucky elbow.

A bloodied Cleary wouldn’t come off the field until much later in the first half, only to return patched-up in the second half. New South Wales had extended to a comfortable lead by then, thanks to one of their three debutants Brian To’o.

To’o scored twice in the left corner in the space of five minutes, the latter off a desperate long offload from Tariq Sims.

Queensland would find the line before half time with Kurt Capewell dashing through on their left edge, but from there the Blues turned the stadium into a slaughterhouse.

Mitchell’s first try kicked off the second-half drubbing, the South Sydney star pouncing on a grubber kick from Trbojevic.

From there, the Queensland defence collapsed completely as the Blues piled on try after try. The Maroons weren’t helped by the loss of starting prop Christian Welch to an early head clash, while David Fifita also had to be checked for a head injury after a knock in the first half.

One of the key defensive issues that cost the Maroons was an inability to cover holes in their line. The Blues broke through nine times in the game while Queensland only managed one line break.

Mitchell continued his blistering form deep into the second half. He first set up Turbo’s second try before scoring another of his own after Queensland winger Xavier Coates messed up a kick return.

Daniel Saifiti crashed through the middle to score one before Turbo completed his hat trick off a deceptive flick pass from James Tedesco with 12 minutes to spare.

The result is a massive blow to Queensland’s shield defence campaign, and will have coach Paul Green scratching his head as to how the Maroons can recover after a disastrous first game in the job.

He has time – there’s two and a half weeks until Game II of the series, during which time another rounds of the NRL season will have played and some previously unavailable stars are set to return from injuries and suspensions.

The second game will take place at Brisbane’s Suncorp Stadium on Sunday, June 27 Australian time. Until then, attention turns back to the club game with Round 14 of the NRL underway this weekend. 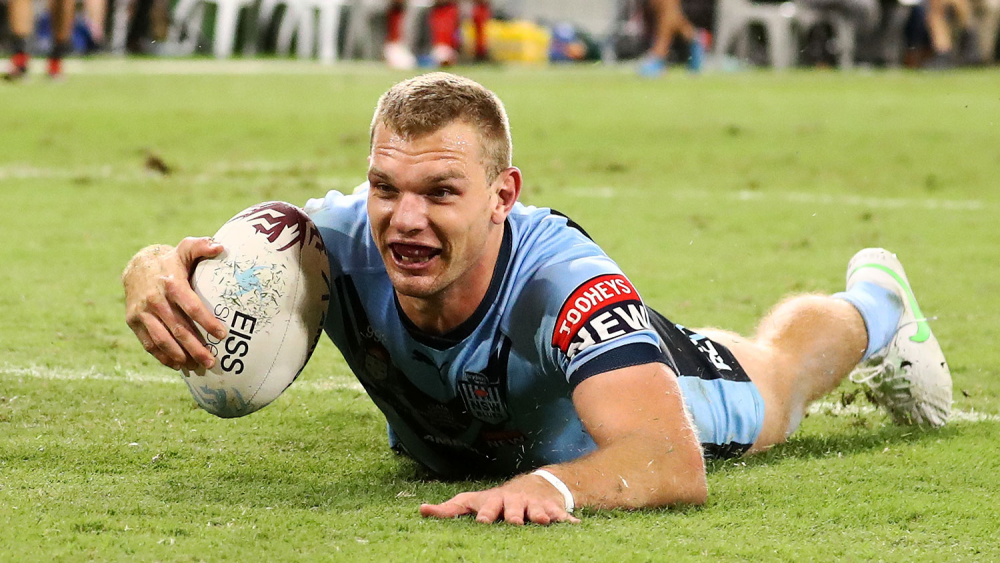