The Queensland Maroons have defied the odds to defeat the New South Wales Blues 2-1 in the State of Origin series.

After being dubbed the “worst” side in Origin history, the Maroons lifted the Shield in front of nearly 50,000 of their loyal fans in what is the most attended sporting event since the beginning of March.

This series, which celebrated 40 years of the State of Origin concept in Australian rugby league, was held across three consecutive Wednesdays after the pandemic derailed the usual plans to hold it in the middle of the NRL season. It’s expected to return to its mid-season slot next year after the lowest TV viewership in 18 years.

The win comes after their women’s counterparts won their first State of Origin last Friday.

Across three hotly-contested games, here’s how the series went down.

Adelaide Oval hosted its first ever Origin match on November 4, with just over 25,000 fans in the stands. NSW were favourites all the way through the lead-up against a Maroons side filled with debutants and missing a couple of important players to injuries and suspensions.

It took Queensland a while to click as the Blues seemed to run away with it early. Despite a fumble right from kick off, NSW worked their way into the game until Damien Cook scored off a rebound of his own grubber kick. Josh Addo-Carr followed up shortly after, but the Blues’ 10-0 lead at half time came at a cost.

Captain Boyd Cordner copped an accidental elbow in the head and went off for a Head Injury Assessment, before his replacement in Cameron Murray succumbed to a hamstring problem. Cordner passed his HIA and returned to the field, but afterwards the saga raised controversy over the handling of the situation.

The half time break appeared to make a difference as Maroons coach Wayne Bennett, returning for his fourth spell in the position, was revealed to have lectured his players on their performance. While the details on this talk were largely left unknown outside the sheds, players said the focus was on simplifying their attack and the power of self-belief.

That was enough to guide the Maroons to 18 consecutive points, with debutantes AJ Brimson and Xavier Coates opening it up. Brimson’s try was a special one, coming off a piece of brilliance from Kurt Capewell that involved a fend and a banana kick.

Cameron Munster extended the lead beyond a converted try, but Addo-Carr kept them within striking distance with just four minutes to go. Conversion kicks were the difference as Nathan Cleary’s two failed attempts accounted for the 18-14 loss.

The second game in Sydney followed a wave of controversy right up to kick-off. Questions lingered over the placing of Clint Gutherson at centre, while some in the Sydney media labelled the young Queensland side the “worst” in 40 years of Origin. But the worst of it came just before the game began; with the match coinciding with Remembrance Day, a traditional ceremony was held to honour Australia’s fallen. But cheers and jeers came from the crowd during what should have been a minute of silence.

NSW would rack up a more convincing half time lead, posting 18 unanswered points of their own after Coates opened it for the Maroons in the corner. The Maroons were hampered after Munster hit his head hard on the turf while catching in the in-goal and would not return after failing his HIA.

The Blues took full advantage as Nathan Cleary kicked them continuously towards the try line. His halves partner in Cody Walker was the first to cross the line for them off the back of a Cleary line break. Desperate Queensland defense kept the margin down, but couldn’t stop Addo-Carr and Tedesco forever. An 18-4 scoreline at half time saw the Blues well on top heading into the sheds.

The second half was a fiery one, with Payne Haas and Tino Fa’asuamaleaui involved in a punch-up sending them both to the sin bin. With both teams reduced to 12 for ten minutes, NSW continued their red-hot form as Jack Wighton broke through three defenders to extend the lead. Mistaken plays by the Maroons kept them on the back foot, unable to come back the way they did the week before.

NSW hammered constantly at the Maroons defense and were rewarded with a Daniel Tupou try in the corner. Josh Papalii did what he could, but it was in vain as the Blues romped home to win 34-10.

The victory reinforced questions about the Maroons side and left the Blues as clear favourites to win their third straight series.

No trip to Queensland rugby league’s spiritual home of Lang Park is easy, especially when you have 50,000 passionate Queenslanders willing you to lose. With the state’s crowd restrictions lifted in time for the final match, the stadium was near packed for what promised to be a thrilling decider.

Back in the left-winger position where he’s previously starred for the Maroons, Valentine Holmes crossed over in the corner in the third minute. James Tedesco responded five minutes later, but an accidental knock from Papalii’s knee and a subsequent HIA failure saw him off the field for the game’s remainder.

Much like Munster for Queensland last week, the Blues felt Tedesco’s loss. Indeed, Munster made a big difference this time around as the Maroons attacked relentlessly and defended aggressively. It paid off with a fortuitous try going to debutante Edrick Lee. And Harry Grant’s debut, following an impressive year in the NRL for Wests Tigers, gave their attack extra depth as he led the charge from dummy half after coming on from the bench.

The impressive first-half show from the Maroons couldn’t quite be matched, but their effort in the second proved to be enough. 12-6 up, they continued their charge, but messed up try-scoring opportunities three times down the left edge. A Holmes penalty goal took the lead beyond a converted try before Grant powered through to barely get the ball down the line to make it a 14-point lead.

The Blues, who still seemed lost in the play throughout, began to chip away at Queensland’s dominance with Tupou breaking through the line in the 65th minute. Cleary kicked a penalty goal of his own to tighten the lead back to six, setting up for a thriller finish. Just when they seemed about to score, Corey Allan illegally hampered Addo-Carr’s chance and copped a sin bin.

The Blues continued hammering away in desperation to break even, but a failed offload attempt sealed the deal, a successful Captain’s Challenge unable to change the fact that the clock had already run down.

With the scoreline 20-14, Queensland had defied slander from south of the border and claimed an historic victory in the most surprising circumstances.

Cameron Munster was awarded the Wally Lewis Medal for player of the series, and captain Daly Cherry-Evans took a cheeky jab at the team’s critics before lifting the Shield: “On behalf of the worst ever Queensland team, thank you very much!” 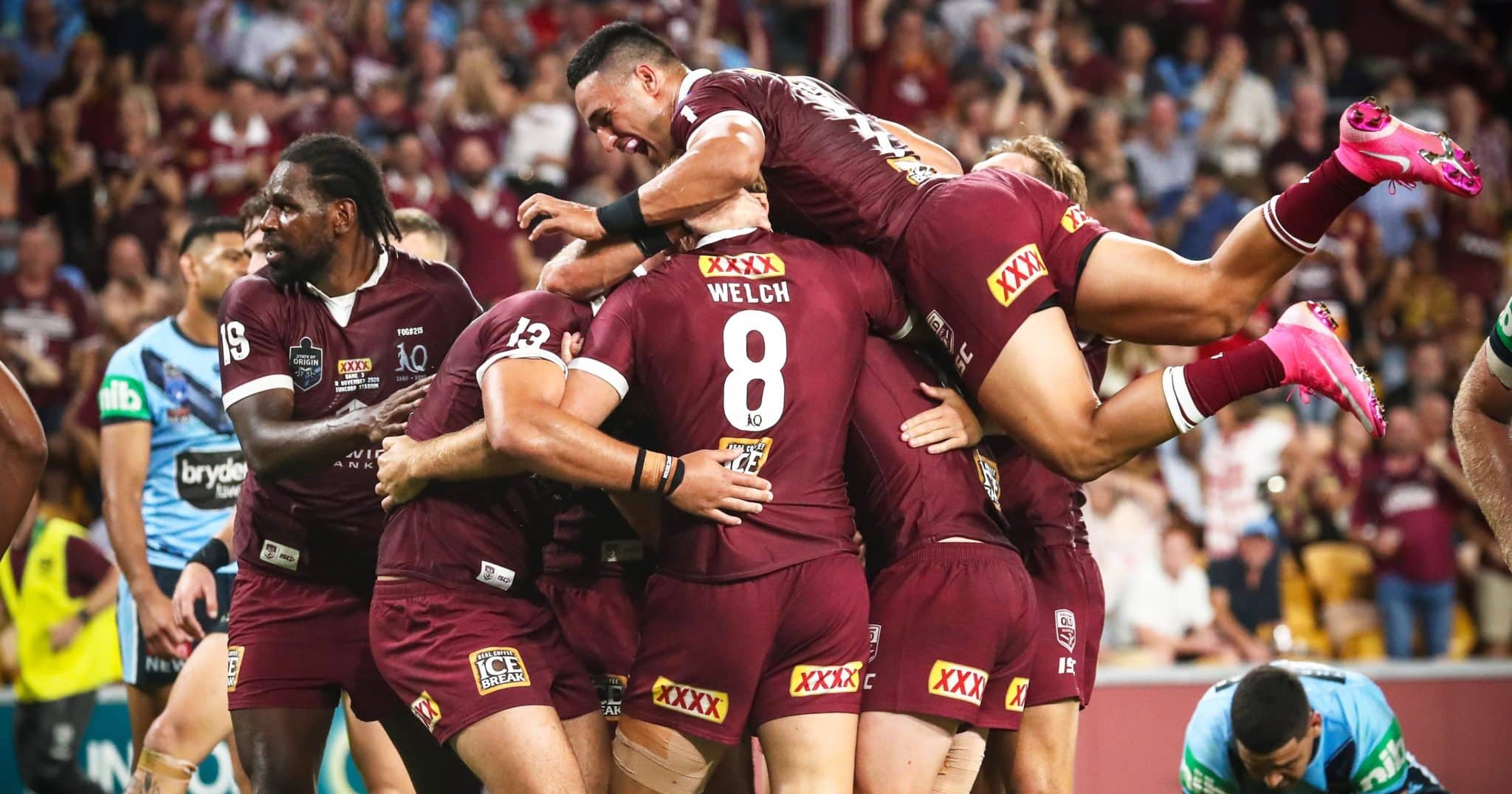