Round 15 took place over two days, Boxing Day and then Sunday, as the festive period saw plenty of fixtures continue to be played out, there were six games crammed into boxing day whilst four more took place on Sunday, let’s see what happened…

The Foxes twice came from behind to earn a point at home to Man United, Marcus Rashford opening the scoring midway through the half after getting on the end of a Bruno Fernandes pass, Harvey Barnes then hit a fine leveller just past the half-hour mark, however, Fernandes then restored United’s lead with just over ten to go when latching onto sub’s Edinson Cavani’s through ball and finishing past Kasper Schmeichel.  The hosts though were not to be denied a point and saw Axel Tuanzebe divert a close-range effort from Jamie Vardy into his own net with five minutes to go and -deny United a record-equalling 11th consecutive away win in the Premier League.

Villa overcame Tyrone Mings’ first-half red card to see off a disappointing Eagles at Villa Park, Bertrand Traore had put the hosts ahead after just five minutes after following in a rebound when Ollie Watkins had seen an effort saved by Vicente Guaita, but then saw MIngs’ dismissed for a foul on Wilfred Zaha, six minutes after both had been booked for a clash between each other.  It only galvanized the hosts to go on and win this one comfortably though, Kortney Hause nodded home Villa’s second after a Watkins header and rebounded off the bar, and then Anwar El Ghazi lashed home the third with a superb finish to settle this one.

The Cottagers and The Saints fought out a hard-fought goalless draw at Craven Cottage, although Southampton did have the ball in the net twice but were both ruled out by VAR on further inspection, much to the frustrations of the visitors.  They were both offside though by the letter of the law, so it meant a point apiece.  The closest anyone came to scoring though came when James Ward-Prowse first-half free-kick struck the bar before Che Adams somehow missed the ball trying to tap home the rebound, whilst Anguissa, Cavaliero and Mitrovic missed good opportunities for the hosts.

This turned out to be a wonderful evening for the Gunners whilst it was a disappointing one for the visitors. Arsenal found themselves two goals up at the break thanks to a Lacazette penalty, although many are saying it should not have been a penalty to start with, and then Xhaka netted a peach of a free-kick to double Arsenal’s lead.

Mount had clipped the post with an early Chelsea free-kick, but they had been poor in the first period and needed a response.  Saka though increased the hosts lead after chipping the keeper and seeing the ball go in off the post, whether he meant it or not it did not matter, and the hosts were in dreamland.  Arsenal then thumped an effort against the woodwork before Chelsea did pull one back through Abrahams effort and then had the chance to make the final few minutes very interesting after winning a penalty, but Jorginho saw his spot-kick saved by Leno, and the Gunners saw out the remainder to end a winless run of seven and net a huge three points.

The hosts saw off Newcastle after goals from Gundogan and Torres, Gundogan converted a Sterling cutback after fourteen minutes before Torres netted from eight yards out after Fernandez had slid into block Cancelo’s low cross but could only succeed in providing Torres with an easy finish.  The margin of victory could and should have been more, but the hosts found Darlow in top form and some poor finishing too meaning they could not add to their tally, but it was three points for the hosts in a game where they enjoyed 76% possession in a very dominant performance against a Newcastle side who ended up resorting to damage limitation on a grim night at The Etihad.

The Toffees moved into second behind City rivals Liverpool after edging a tight contest against bottom side Sheffield United in soaking conditions at Bramall Lane. The winning moment came the minutes from time when Sigurdsson found the bottom corner to net Ancelotti’s side fourth straight win in the league which saw them leapfrog both Leicester and Man United into second spot, and broke Blades hearts as they remain winless in fifteen games now and ten points from safety now, the hosts are playing tough but have now lost a majority of there games by just one goal, last year they won a lot by the odd goal but it’s not happening for them this time around so far.

Patrick Bamford’s early penalty ended up proving enough to separate the sides at Elland Road, although the visitors certainly felt they were hard done by in this one after feeling they were on the end of some contentious VAR calls.  Bamford was adjudged to have been brought down by Pope although the keeper got a lot of the ball but too much of Bamford as well and said it was a penalty.  And then Burnley were denied a goal after the referee adjudged Mee had fouled keeper Meslier when it looked like the other way round before Barnes swivelled and fired the loose ball into the net.  It certainly upset the visitors who were unlucky to get anything from the game, but for Leeds it’s a good bounce back after their 6-2 loss at Man United last time out.

A lot was made of Moyes team selection prior to this game, a rather negative one at that, and the first half saw The Hammers put in an awful performance and The Seagulls finally made their dominance count when Maupay fired home from inside the box after poor defending from the hosts, and it meant the hosts would have to change things up to get back into this contest.

Moyes, realising his error, brought on Yarmalenko and Lanzini to bring some positiveness into the home side, and they were both involved in the equaliser on the hour mark after the former crossed for the latter to get a header at goal, laid the loose ball back to Johnson who side-footed a lovely effort into the net.  More VAR controversy followed though, and Brighton retook the lead after they were caught napping at a corner and Dunk controlled before firing into the roof of the net, although a lengthy check deemed Dunk had not handled before firing home, which causes quite a bit of debate, it did seem to hit some of his arm, but it was adjudged to be legal and the goal stood.

West Ham though managed to level with eight minutes left after a corner saw Dunk head onto Soucek’s head and rifle past Sanchez into the net, meaning the hosts managed to escape with a share of the spoils.  Brighton would be very disappointing with only a point I’d suspect after leading twice in this one.

Not many gave Big Sam and his West Brom side any chance in this one, although remember they had pulled off a shock 1-1 draw at Man City in what turned out to be Bilic’s last game in charge.  Liverpool thought it would be a comfortable night though when Mane’s brilliant control and finish from a Matip pass after twelve minutes gave them the lead, and they had 84% possession in the opening half although only had one goal to show for it as West Brom dug in and made it difficult for the hosts to pass.

The Baggies were far more ambitious in the second period and should have levelled when Grant ran onto a clearance but saw his effort saved by Alisson, but they were to get another chance as Ajayi rose to head in off the post with nine minutes to go to earn a superb point against the champions and left the hosts very frustrated indeed.  Johnson, the visitor’s keeper, did have to pull off a wonder save from Firmino late on to make sure they got that point, but Big Sam, who was the last manager to win a league game at Anfield, got a point in this one in what was a masterclass tactically wise against arguably the best side in the league right now.

This started very well for Spurs after Ndombele struck home from outside the box after just 57 seconds, but after that, they reverted to type as Mourinho’s normal defensive mantle of ‘we will hold onto what we have and hit you on the break if we have to’.  Wolves went close through Silva and Neto, whilst a breakout from Spurs saw a poor finish go straight at the keeper, and into the second-period Wolves continued to do most of the pressing as Spurs decided to put up the wall and adopt the ‘Thall shall not pass’ motto, which seemed very frustrating to many Spurs fans I saw tweeting on social media!!!

Sure enough, with four minutes to go, Wolves levelled as Saiss glanced a header into the far corner, and Spurs had seen three points slip away once again. Silva almost made it worse after getting in behind Dier to head at goal, but the header was weak and east for Lloris, but the hosts were delighted with the point, whilst for Spurs, not so much, it is another game without a win as they have now hit a sticky patch. Jose’s negative tactics are certainly a talking point that is for sure…

So, what has that done to the Premier League table after those games… 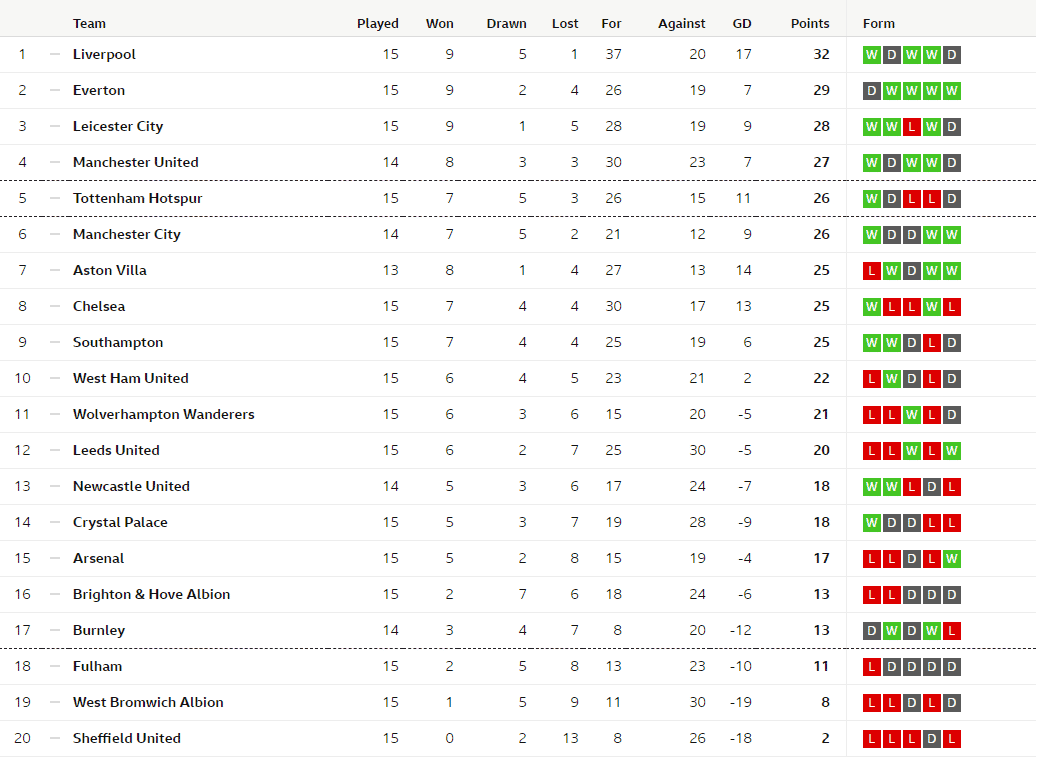 Liverpool‘s lead the table by three points from city rivals Everton, and it’s only four points that separate the Toffees in second all the way down to Southampton in ninth in what is an unbelievably tight top half of the league after fifteen games.

Down at the bottom, The Blades are still the only side not to have won this season and are in danger of being cut adrift, now ten points off safety, whilst West Brom are still five points from safety despite that superb draw at Anfield, Big Sam had much work still to do there.  Arsenal has some breathing space between them and the drop zone now after a terrific win over Chelsea, can they kick on now?  Two points separate Brighton in 16th and Fulham in the final relegation spot in 18th, so it is tight there too.

The action does not stop in the Premier League another Round of fixtures beginning tomorrow (Monday) so let’s see those matchups for Round 16, shall we…

Who can end the weirdest year of all on a high, we shall find out over the next three days, stay tuned to see what happens. 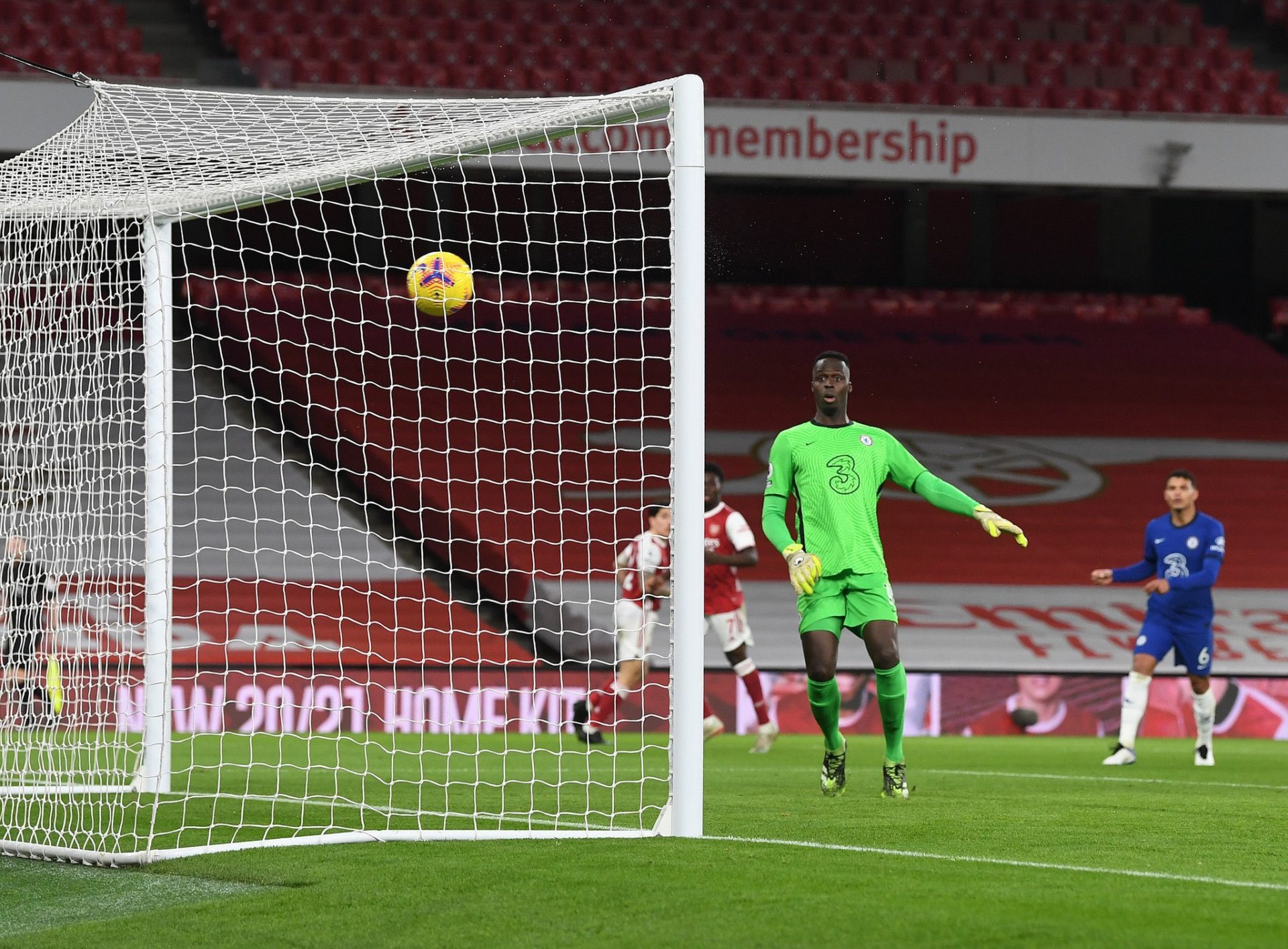