Pittsburgh needed desperately to break their three-game slide in order to re-stake their claim on the division and not fall into the mess which is the wild card race. The one seed had already been stripped from them as a result of the streak, so they couldn’t afford to lose more. On the other sideline, Indianapolis was in a similar situation, albeit not because of a three-game skid. A win would keep them in division contention, a loss would have them on the outside looking into the picture.

Indy came out feeling that sense of urgency. On their first possession, they drove the field in nine plays, capping off the drive with Jonathan Taylor’s first of two touchdowns on the afternoon.

Whereas, the Steelers came out flat, only able to move the ball 56 yards until their final series before halftime. By the time the Colts’ first drive of the second half was over, Pittsburgh found themselves in a 24-7 deficit, on the verge of fading into irrelevance. Their next series made it even more clear, as the Steelers wasted ten plays, 75 yards and almost four and a half minutes, to simply turn the ball over on downs.

Then out of nowhere, something snapped in Big Ben and the rest of the Steelers. On the offense’s very next play, Big Ben threw a beautiful 39-yard strike to Dionte Johnson for a touchdown. A quick three and out from Indy, led to another speedy score for the Steelers, as Big Ben connected with Eric Ebron to finish off a five-play drive.

Momentum was in full swing, as the Colts saw their 17 point lead reduced to a three-point lead in less than three minutes. They needed a statement drive. Five plays and 20 yards later, however, they settled on a punt.

This time, Pittsburgh patiently drove the field, eating four and a half minutes off the clock. The Steelers drove 84 yards on ten plays and secured their first lead of the game with a beautiful catch from Juju Smith-Schuster on Ben’s third and final touchdown pass of the day.

An insurance interception from Mike Hilton, and the Steelers officially seal the deal, clinching the AFC North.

The Steelers snap slide with a huge, comeback victory over the Colts, 28-24

Travis Kelce hauled in seven receptions for 98 yards and a score, setting NFL records on a day that the defenses dominated. Yet another strong performance and he was able to set the single-season record for receiving yards by a tight end. In addition to this, he became the first tight end in NFL history to post two seasons of 100 plus receptions. All eyes will be on him next week as he attempts to be the first tight end to lead the NFL in receiving yards for a season.

This game was yet another example of the Chiefs looking off for a majority of it, but still coming through with the big play and the big names in the end. More important then the narrative of the game was the end result, as the Chiefs clinch top spot in the AFC. This will give them the luxury of being one of two teams in the NFL that does not have to play in the first round of the playoffs.

Despite the game being a defensive slugfest, the big names continued to come through for Kansas City. Patrick Mahomes threw for 278 yards, ran for 21 and accounted for two touchdowns. Demarcus Robinson caught Mahomes second, game-winning touchdown, with under two minutes to play. Tyreek Hill was held in check most of the game, only catching four passes for 65 yards, though he did have a nice tackle to save a touchdown when Mahomes was picked.

This was yet another game in which Mahomes and the offense turned the ball over multiple times, leaving the question of how playoff-ready this team really is. They do seem to rely on “turning it on” when it counts too much. They also seem to make it look easy when they do.

Jamison Crowder caught seven passes for 92 yards and a touchdown and threw a 43-yard touchdown pass, as the Jets jumped out early on the Browns, and bore down on them late. Crowder caught his touchdown from Sam Darnold, who threw for 175 yards and two scores. Crowder completed his score to Braxton Berrios, Darnold hooked up with Chris Herndon for his other touchdown,

New York had nothing to play for but pride at this point, whereas Cleveland still had division hopes (let alone playoff hopes on the line) The Browns were hot and the Jets had finally gotten their lone win out of the way. The narrative seemed set for this game, but it ended very differently. Right at the end of the first quarter, New York flashed the razzle-dazzle on the Crowder to Berrios pass. From the Jets built a 20-3 lead.

During the time it took the Jets to build the 20-3 lead, their defense came through in a big way. Over those six Browns’ possessions, they were limited to 75 yards and zero points. New York also turned over Cleveland with a Tarell Basham forced fumble and Foley Fatukasi fumble recovery.

Soon after, however, New York’s fortunes began to turn. It started with a block field goal, leading to a quick score for the Browns. The Jets went three and out on the following series, setting up Cleveland’s comeback. The Browns went on a twelve play, 72-yard drive, taking nearly four minutes off of the clock and capping it off with a touchdown. The same old Jet’ lead was cut to 20-16.

Then, New York’s D clamped down again, forcing a punt on the very next series. After that, the Jets made their game-defining statement. On the Browns’ third play of the drive, Tarell Basham came through with a huge sack, forcing his second fumble of the game. This one was recovered by John Franklin-Myers. Three plays later, New York kicked a field goal, then held on to preserve the lead.

With the loss the Browns fall out of division contention and into the wild card mix, needing to win next week to clinch a playoff berth.

The Jets stormed out and clamped down to preserve a 23-16 victory over the Browns.

The Seahawks and the Rams battled it out for the division title, with a shot of the first seed in the NFC also on the line. Both defenses came out swarming and ready to play.

Seattle’s defense, led by Jarran Reed, put up nine negative plays and forced a turnover. Quandre Diggs came through in the clutch with an interception to end a ten-play drive.

Los Angeles’ defense, led by Leonard Floyd, limited one of the better offenses in the league to around 300 yards, forcing ten negative plays in the process.

The two Ds traded blows for the better portion of three and a half quarters before the Rams eventually cracked. With a little under seven and a half minutes to play, the Seahawks were given the ball with a 13-9 lead. Russell Wilson proceeded to lead Seattle on a nine-play, 80-yard drive, taking four and a half minutes off of the clock. Wilson mixed passes to his two favorite targets, Tyler Lockett and DK Metcalf, with Chris Carson runs, to put the Hawks within 13 yards of a score. Wilson then concluded the drive, with a  game-sealing touchdown pass to Jacob Hollister.

The Seahawks wore down, then knocked out the Rams, 20-9

Baltimore Ravens run all over the New York Giants, 27-13

Baltimore’s offense rushed for 249 yards, controlling the clock for over 22 minutes in the first half (35 minutes for the game). Meanwhile, their defense came up with 6 sacks and 7 tackles for loss, forcing turnover on downs New York’s final two possessions. Ravens move into a wild card spot, the Giants are eliminated from playoff contention.

Jacksonville clinches the worst record overall and secures the first pick of the draft, as the Bear dominate with all three units. Chicago’s offense continues to progress since the return of David Montgomery and reinstating of Mitch Trubisky, as their 4th straight win moves them up into a Wild Card spot.

The Bengals pile up 540 yards of total offense, and scored 10 points in the final 2 minutes to complete a come from behind victory. Cincinnati took the lead on Samaje Perine’s second rushing touchdown of the afternoon. The next series, Sam Hubbard forces a fumble and Margus Hunt recovers it to help seal the win. The victory was all but pointless, as neither of these teams is playoff-bound.

Justin Herbert set the NFL record for most touchdown passes by a rookie quarterback, with his 28th TD of the season, this one Austin Ekeler. The Chargers defense intercepts two Drew Lock passes, including the Hail Mary. Mike Badgley kicks the game-winning field goal with less than a minute to play.

Carolina turns over Washington 4 times, forcing 7 negative plays and defending 8 passes. The Panthers held the Football Team to 234 yards before their final two series, by then it was already too little too late.

Andy Dalton and the Cowboys receivers hook up for 377 yards and 3 touchdowns through the air, as Michael Gallop and CeeDee Lamb each score twice. Meanwhile, the Dallas D turn over the Eagles three times. The Cowboys score 24 unanswered points, including 17 in the second half, to end the game. 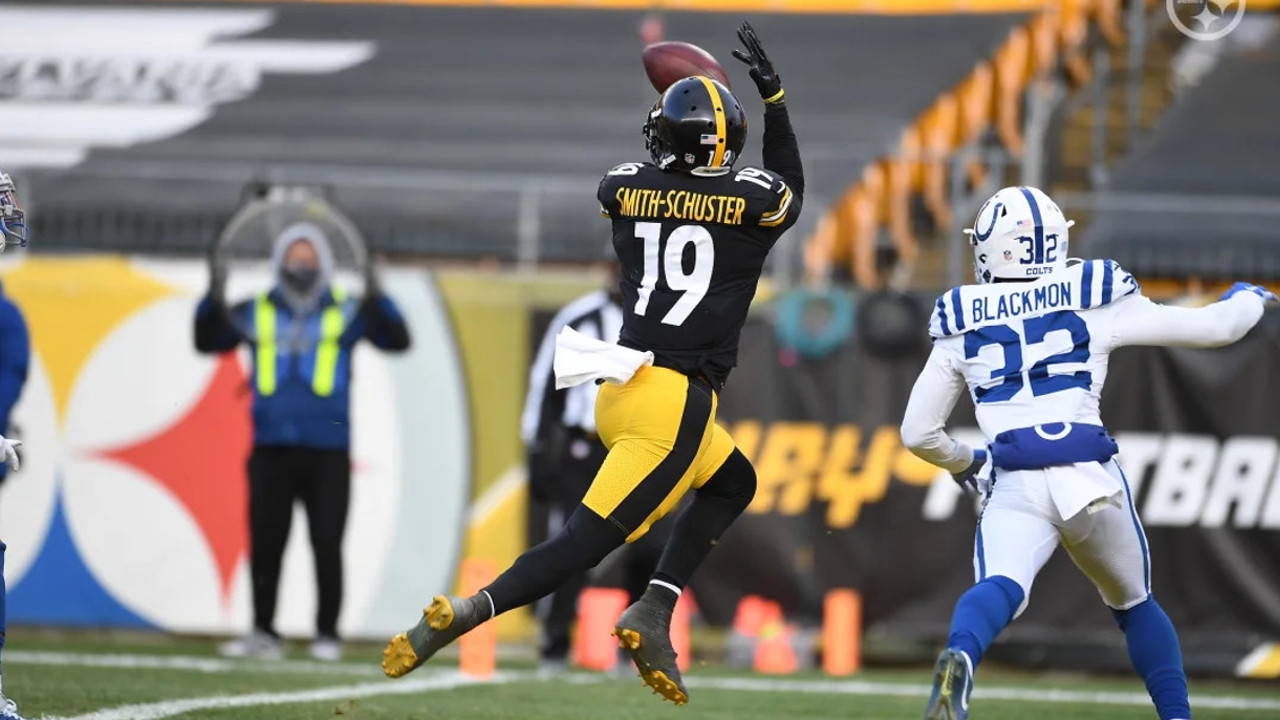