We are less than 1 month away from the start of the 2021 MLB season. MLB Free Agency is wrapping up, find out where all the big names landed, MLB teams are starting to see who will make their everyday rosters, contenders setting rotations, and probable lineups, while weaker teams are focusing on which prospects will be getting called up this year. The weaker teams are our focus for today, as we go over the bottom 5 teams in the league.

Let’s go over lineups, ceilings, breakout contenders, and the worst teams in the league.

The award for Worst Team in the MLB goes to the Pittsburgh Pirates. While the Pirates have a lot to look forward to with younger players like Cole Tucker and Ke’Bryan Hayes, they don’t have many players that either have or are ready to excel in the majors. They were on pace for just 52 wins last year, which would not have been anywhere near the playoffs. They have not made the playoffs since 2015 which is when they lost the Wild Card.

They have a starting lineup of  Jacob Stallings, Colin Moran, Adam Frazier, Ke’Bryan Hayes, Kevin Newman, Bryan Reynolds, Anthony Alford, Gregory Polanco, and Mitch Keller will most likely be their ace. It is safe to say they went full tank mode, especially with the players they lost this offseason. They do have the #1 pick in this year’s MLB draft, so they are looking to get a quality pick for a couple of years in the future.  The Pirates have a ceiling of 5th place in a division consisting of Reds, Cubs, Cardinals, and Brewers.

Key Players: Cole Tucker will be competing for a starting job at Shortstop and Center Field this spring training so he could wind up at either of those positions to start the season. Ke’Bryan Hayes is going to be a star with the Pirates for the next decade or so. They could also get better at the trade deadline because it is a good spot for veteran players that are looking to help the young guys.

The 29th best team or the 2nd worst team in the league is the Texas Rangers. They did add Khris Davis in a trade for Elvis Andrus but they are so similar, we will have to wait for the season to see who won the trade. David Dahl also signed with the Rangers this offseason after 4 major league seasons with the Rockies. The Rangers would love if Nate Lowe has a good year and proves to be an above-average first baseman in the league.

Their starting lineup as of now consists of Jose Trevino, Nate Lowe, Rougned Odor, Anderson Tejeda, Isiah Kiner-Falefa, David Dahl,  Leody Taveras, Joey Gallo, and their ace is Kyle Gibson. Kyle Gibson believes they can be competitive this year, which is unlikely but a mindset you want your team to have at all times. They need players that can support Joey Gallo in the lineup because he is going to consistently give you 40 homers if he can stay healthy. Khris Davis will most likely be traded and go to a good American League contender where he can be a DH.

Key Players: Joey Gallo, will always be a power hitter but he needs protection in this lineup. David Dahl has had some weird injuries but he’s a younger left fielder and looks to stay healthy and have a good season in Texas. Nate Lowe is bringing in his bat and glove from Tampa Bay and looks to show if he will be able to hold up his stats for a full season.

The 28th best team in the league are the Detroit Tigers who are in a division with Indians, Twins, White Sox, and the Royals. The Tigers have a ceiling of 4th place with the only team that has a realistic chance of beating is the Royals. The Tigers still have that big bat in Miguel Cabrera, he has been there for years and is still a consistent hitter. He led the team in home runs, RBI’s, and walks in the 2020 season. They have a young pitcher in Casey Mize and their ace is Matthew Boyd.

Their starting lineup is Wilson Ramos, Jeimor Candelario, Johnathon Schoop, Niko Goodrum, Willie Castro, Robbie Grossman, Jacoby Jones, Kristen Stewart, and as previously stated Matthew Boyd is their ace. They have a lot of young guys that can propel their team based on energy alone. They also have vets such as Miguel Cabrera that can teach the young guys.

Key Notes: Their ceiling is 3rd place, in a tough division this is a hard task but it is a possibility that they could use that energy to get them there. According to Pecota, the Tigers have a 0.0% chance of winning the division. I agree with that, I do not see them winning the division because the American League Central is a top-heavy division. They won’t be able to beat the White Sox or Twins but they have a shot against the Indians, without Lindor or Carrasco, or the Royals.

The 27th best team in the league is going to be the Baltimore Orioles. They are in a tough division with the Yankees, Rays, Blue Jays, and even the Red Sox I believe can beat them in the standings in a full season. Their ceiling is most likely 4th place in the division but 5th place is much more likely. There are teams in the bottom of other divisions that are a lot better than the Orioles which makes them come in this late in the list.

Their projected starting lineup is Pedro Severino, Trey Mancini, Yolmer Sanchez, Freddy Galvis, Rio Ruiz, Ryan Mountcastle, Cedric Mullins, Anthony Santander, and their ace pitcher is going to be John Means. A couple of players are slated for a breakout/ great return season. Trey Mancini is coming off a season that he did not participate in, due to colon cancer. He had a terrific 2019 season with 35 homers, 97 RBI’s and played in almost every game. Ryan Mountcastle is a guy everyone is high on. He is projected to have a good season. He only played 35 of the 60 games for the Orioles last season. He had a .333 batting average, with 5 home runs, 23 RBI’s, and 42 hits in only 140 plate appearances.

This Orioles team is still years away from being a playoff team. They did have a terrific lineup last year. Their worst offensive player had an On Base Plus Slugging percentage only 9 points below average and had enough plate appearances to qualify. This is impressive for a team that did not make the playoffs, and that is their worse batting player.

The Colorado Rockies are in a tough spot in a very top-heavy division. At the top of the NL West are the Dodgers and Padres. They then have to deal with the Giants and Diamondbacks both of which are arguably better than the Rockies. Their ceiling is 3rd, but extremely unlikely because they are not better than the Giants or Diamondbacks on paper. They will not be making the playoffs or wild card.

Their projected starting lineup is Elias Diaz, Josh Fuentes, Brendan Rogers, Trevor Story, Ryan McMahon, Ian Desmond, Raimel Tapia, Charlie Blackmon, and their ace will most likely be Jon Gray. Some key players they lost this offseason would be Nolan Arenado (traded to St. Louis Cardinals), Daniel Murphy (retired), and David Dahl (lost in free agency to the Texas Rangers). Trevor Story is one of the best shortstops in the league, some people may say the best. He should be traded to a contender this season since the Rockies are not in a win-now mode. It also should not be surprising if Charlie Blackmon gets traded at some point this season.

Trevor Story should be traded this season because he is too good of a player to waste on this team when they are not trying to make the playoffs. Charlie Blackmon had almost a .500 batting average well into the 60 game season last year. With all due respect to these players, they should get traded. They will not be making the playoffs with or without these two players. They traded Nolan Arenado, who in my opinion is the best third baseman in the league, to the Cardinals which cemented them not winning.

The final team in the bottom five teams in the league is the Kansas City Royals. Their division is packed with the Twins, White Sox, Indians, and Twins. Their fan base should be excited about this season, they might even get up to a .500 season. They won the World Series in 2015, and have not made the playoffs since. This offseason they lost a top prospect in Khalil Lee, but they gained Andrew Benintendi who they are hoping can return to his 2018 form.

They also have a guy named Jorge Soler, who has crazy power and plays in Kauffman so he could go off for homers this year. They could possibly make another couple of moves throughout Spring Training. Rick Porcello and Mike Leake could still be signed to be inning eaters for the Royals. Their ceiling in this division is 3rd, falling behind the Twins and White Sox. This is if everything goes right and they will not be competing for an American League wildcard spot.

The Pittsburgh Pirates, Texas Rangers, Detroit Tigers, Baltimore Orioles, and the Kansas City Royals are the bottom five teams in the MLB. Next up, teams #24- 2o. Will we reach teams that can make the playoffs? Any 2nd place ceiling teams? We will find out. 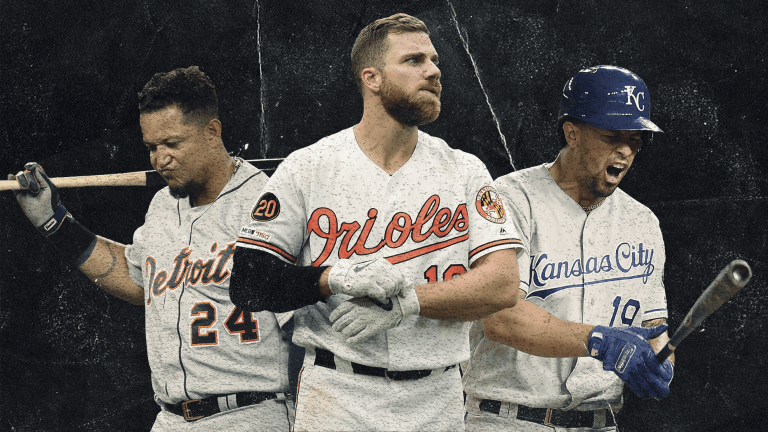