In what has been the least exciting year of rugby for most of us during this 2020 season, Richie McCaw created some positivity when he was elected World Rugby Union’s Player Of The Decade 2020. Upon reflection of the decade, many pundits believed the triumph of the All Blacks between 2011 and 2015 where New Zealand became the first nation to win consecutive Rugby World Cups was something of an iconic nature. The rugby world unanimously agreed that Captain Courageous, Richie McCaw was the ultimate choice for the Rugby Union Player Of The Decade.

The Early Years of Richie McCaw:

Born on the 31st of December 1980, Richie was one of two children who grew up in Hakataramea Valley, a rural village in South Canterbury of New Zealand. He played rugby for a local Kurow rugby club as a youngster and only began to take the sport seriously when he attended Otago Boys High School in Dunedin. As a student, Richie McCaw was a top academic student, as well as a first-team rugby player for his prestigious school. In his final year, McCaw was elected as the Head Boy of his high school.

It’s clear Richie McCaw was always destined to be an All Black as he was selected to represent New Zealand at Under-19 and Under-21 level. At Under-19, he was part of the successful side which won the World Championship in Wales.

Who would have predicted in those early years New Zealand had a future World Rugby Player Of The Decade?

The Beginning Of An International Career:

In 2001, Richie (aged 20) received his first Super Rugby cap under the Crusaders rugby coach, Robbie Deans. After his first season playing at the highest provincial stage in New Zealand, Richie received his first All Blacks call up for the end of year tour. His international rugby debut came when New Zealand faced a fierce-looking Irish side at Lansdowne Road, Dublin, where New Zealand triumphed 40-29 and Richie McCaw was named Man of the Match.

In his second international rugby season, Richie McCaw only played 6 test matches for New Zealand in 2002. After being advised to rest the outgoing 2002 European Tour, Richie still impressed the Rugby World comprehensively to be named International Rugby Players Associations: Newcomer Of The Year.

In what looked destined for a remarkable Rugby World Cup year for New Zealand, McCaw was elected as the first choice open-side flanker for his country. New Zealand regained the Bledisloe Cup from Australia and won the Tri-Nations Rugby tournament.

With high morale in the All Blacks training camp, New Zealand went into the 2003 Rugby World Cup ranked second in World Rugby. McCaw, being the most feared player at the breakdown played in every single New Zealand fixture, however, in a surprise shock result in the semi-finals, Australia managed to beat all odds and eliminate New Zealand from the tournament.

In 2004, Richie McCaw received the captain’s armband from long-serving All Blacks player, Tana Umaga. At just age 23, the natural-born leader, McCaw, was set to be one of New Zealand’s most memorable captains of all times. Two years later, McCaw became the permanent captain of New Zealand and was the player to lead the All Blacks to the 2007 Rugby World Cup in France.

Unfortunately, after a breeze through the group stages, New Zealand were eliminated by the tournament hosts France in the quarter-finals. Not only was this the worst exit New Zealand has experienced in their World Cup tournament history; McCaw’s leadership skills were heavily criticised and questioned by the media.

The 2011 Rugby World Cup saw the tournament return to the nation which last hosted back in 1987. New Zealand was set as firm favourites and desperately seeking to amend the years of being labelled as the “chokers of rugby”. After a gruelling 8-7 victory in the final over a physical French side, Richie McCaw’s All Blacks lifted the prestigious William Webb Ellis trophy for the second time in history.

Following their 2011 Rugby World Cup success, New Zealand became the first nation in Rugby history to defend their title. At the 2015 Rugby World Cup in England, New Zealand hammered cross-Tasmanian rival, Australia, with 34-17 at Twickenham, making New Zealand the first team to win the tournament three times. Along with that, Richie’s leadership qualities were at a new height and therefore paved the way for him destined as one of the best rugby players of the decade.

Asides from his amazing leadership qualities, Richie has always been known as the most feared forward in World Rugby. His ability to pose as a large threat at the breakdown, along with his endurance to last a full 80 minutes make him a superb competitor and feared by many.

Richie McCaw made history for being the first All Black to reach 100 test matches and was once the most capped international rugby player of all time. From winning numerous New Zealand sportsman of the year, to being the only player to have won World Rugby Player of a total of three times.

Undoubtedly one of the greatest legends in the game of rugby, Richie McCaw will always be remembered as one of the most consistently feared – and respected – players of the last decade. His records on the field speak for itself.

ALSO READ: The Greatest Fly Half Of Modern Rugby

The fact that Richie has won a rugby test at every stadium he has played in, along with captaining New Zealand 110 times in his 148 test caps, Richie McCaw is undoubtedly the World Rugby Union Player Of The Decade. 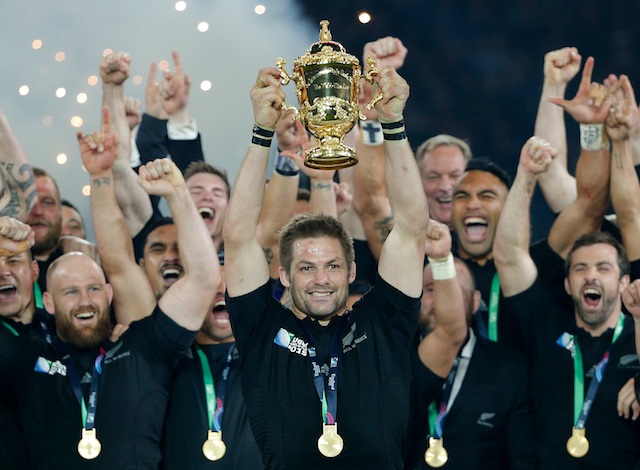