Petr Mrazek (#34) of the Detroit Red Wings celebrates a 6-5 shootout win over the Boston Bruins with teammates at Joe Louis Arena on January 18, 2017 in Detroit, Michigan. (Photo by Gregory Shamus/Getty Images)

Red Wings WIN! In a comeback, 6-5, over the Boston Bruins in a shootout, picking up a critical two points and a TON of confidence. Also, there was some controversial refereeing in this game, but we’ll get to that later.

The Wings’ came into the game facing a crucial opportunity to pick up points, being 6 points back of the 3rd place Maple Leafs who have 3 games in hand on the Winged-Wheelers.

Unfortunately, I have to talk about the first period before I get to the good stuff.

About 40 seconds into the game, Adam Mcquaid took an awkward angle shot on Jared Coreau from the right circle. Coreau gives up one rebound, and then another. And with a player like Brad Marchand in front of the net whacking at it, that’s never good. The puck does get buried in the back of the net, but by Frank Vatrano instead of Marchand. Another early lead for a Wings adversary, it’s 1-0 Bruins.

Mike Green tries to bring the puck out from behind his own net, but gets it stolen by Patrice Bergeron. Bergeron finds Brad Marchand at the right circle, who finds Brandon Carlo at the right point, who finds the back of the net on a one-timer. Bad defensive zone turnover by Green, great shot by Carlo, and it’s 2-0 Boston. Just when I thought the Wings’ powerplay was improving,too.

A few minutes later, while Danny Dekeyser was serving a penalty for tripping, Frank Vatrano fires a shot on net on a nice pass from Ryan Spooner. It finds its way past Coreau, who barely moved, and it’s 3-0 Bruins. At that point, Jeff Blashill had enough with Coreau, and sent Petr Mrazek to relieve him in between the pipes. This is where it started to turn around a bit.

Flash forward about 7 minutes, the Wings Dylan Larkin dumps a puck into the Bruin zone that is chased down by Tomas Tatar. Tatar pulls up in the middle of the right circle, and finds the trailing Larkin wide open in the slot. Larkin buries it for his 12th of the year, and its 3-1.

With 1:36 left in the period, Xavier Ouellet was called for an interference minor on Brad Marchand. On the powerplay, Bruins defensemen Torey Krug fired a slapshot from the point that was deflected in by Bergeron behind Mrazek, with 58 seconds left to go in the opening frame, and its 4-1 Bruins heading to the rooms.

As bad as the first period was, I knew that this team may have a comeback in them. They’ve done it this season, such as the comeback against Toronto to earn a point in the Centennial Classic. I felt that they would have some juice in them in the second period, especially after the wins against Pittsburgh and Montreal.

Welp, I was right.

4:21 into the period, the Red Wings have pressure deep in the Boston zone. Tomas Tatar fires a blind pass that is tipped, but not enough to keep it away from its recipient, Xavier Ouellet. He takes a blistering slapshot that finds the top right corner of the net for his 2nd of the year. The comeback has begun, it’s 4-2.

5 and a half minutes later, the Red Wings are stirring up trouble in the Boston zone once again. Thomas Vanek received a pass and proceeded to skate behind the net, drawing the defender from in front, which would lead to a wide open slot for a cutting Andreas Anthanasiou. Vanek finds him on a beautiful no-look backhand pass, and Anthanasiou fires it past an unprepared Tuukka Rask for his 10th of the year, and it’s 4-3.

About another 5 minutes later, Brandon Carlo slips and falls at center ice, turning over the puck to a speeding Tomas Tatar. Tatr took the puck in front of the net on a backhand and tried to slips it through the pads of Rask. The puck took a weird bounce and hopped up about 3 feet before landing across the red line. Tatar with his 10th of the year and an awesome celly, and its knotted up at 4.

20 seconds later, however, Adam McQuaid took a shot from the point that deflected off of Jonathan Ericsson and through the 5-hole of Mrazek. Only 21 seconds after the Wings tied it, it’s 5-4 Bruins. That would be the score going into the third.

Even though the Bruins reclaimed the lead, it felt like the Wings still had momentum. The crowd at the Joe was finally getting into it, chanting “Let’s Go Red Wings”, and standing for almost all of the third period. If I closed my eyes, it would’ve sounded like a playoff game.

Both teams went back and forth with chances in the third period, with pressure obviously on the Red Wings. Neither team could find the back of the net until almost 17 minutes into the period.

Both the Red Wings and the Bruins were feeling the pressure with the game’s end nearing. The Red Wings had the puck in the Bruins zone, and were peppering Rask and his defensemen with shots. The Bruins gained the puck, but rushed a pass, and turned it over to Tomas Tatar. The puck found the right point and Nick Jensen, who passed it over to his defense partner, Ouellet. He fired a shot wide, that was gotten by Tatar. He passed it in front to find Dylan Larkin, who threw the puck in front of the goal mouth. Planted there was Gus Nyquist, who directed it into the right side of the net for his 7th of the year, and a crucial goal to knot the score back up at 5.

Joe Louis Arena erupted when this goal was scored. I haven’t been the only one to notice this sudden change in play of the Wings, and other fans are getting excited as well. The Wings began a powerplay with 2:40 left in the period, but failed to convert, and we were heading to overtime. 3 on 3 overtime.

3 on 3 overtime is possibly the most exciting thing in sport. There is much more ice per player, and way more chances than 5 on 5 or even 4 on 4, for that matter. Each team had great chances, but the best from both teams was a Brad Marchand breakaway. Marchand came in, went to the backhand, and whiffed. Some Bruins fans called for a hook on Anthony Mantha, was was behind Marchand hassling him. I don’t think a hook would have been the appropriate call. I would think it would be a slash if anything. I think it could have been called, but I’m glad it wasn’t. Mantha was harrassing Marchand, trying to mess up his shot, and that’s exactly what he did. I could see an argument for a slash, but it had no effect on Marchand’s shot; he just missed the puck.

Neither team was able to score in the overtime, and it went to a shootout. Before I talk about that, I want to address the fact that it’s a travesty that a game like this has to be decided in a shootout. I feel like the 3 on 3 OT should be extended to at least 10 minutes. It is far more exciting than a shootout, in my and many peoples’ opinions.

Neither team gets a goal in the first set, with Anthanasiou and Ryan Spooner being denied. The second shooter for the Wings would be Thomas Vanek, who came in on a bit of an angle and fired a beautiful wrister over the left shoulder of Rask, off the bar, and in. However, the very next shooter for the Bruins, Brad Marchand, would match him with a wrist shot through the legs of Mrazek.

The Wings third shooter would be Frans Nielsen, who started slow, but picked up the speed on Rask, who dove out for an attempted pokecheck. Nielsen avoided the pokecheck and roofed a backhander to put the pressure on Boston. Boston’s third shooter would be Frank Vatrano, who came in wide right, lost handle of the puck for a second, came across the net and fired a wrister wide of the net, sealing the Wings’ third straight win and a huge extra point, putting them 6 points back of the Bruins with 3 games in hand.

Now, about the refereeing. I do agree that some calls that could have been made were missed, such as the Marchand breakaway in overtime, or multiple inferences and trips on Thomas Vanek, who seemed to barely get a call. Although I believe that some of the missed calls in Vanek were atrocious, I don’t think the refereeing was as bad as some fans are saying. The refs called a fair game, making or not making the same calls for both teams. The only point that I agree with Bruins fans on is the Pastrnak roughing call late in the third. Pastrnak came over and grabbed Justin Abdelkader after the play for seemingly no reason. At the same time, Anthony Mantha was trying to tug him away from Abdelkader. As Eddie Olczyk said, it was like a “domino effect”. Abdelkader goes down, all the ref sees is Pastrnak’s hand on his sweater, and he is given a 2 minute minor for roughing. Mantha gets nothing.

I think that Pastrnak either shouldn’t have gotten that penalty, or Mantha should’ve been assessed one as well. The Wings didn’t end up scoring on that powerplay, however, so it wasn’t really that big of a deal. All in all, I felt the refereeing was consistent and fair for the most part. Incorrect calls or no-calls were being made for both sides. But, then again, my team won, so I don’t have to be as angry as Bruins fans!

Looking back, this comeback win could end up being huge later in the year if the Wings are battling Boston for a playoff spot.

The Wings next game is on Friday, January 20th against the 8th place Buffalo Sabres. The puck drops at 7 P.M central time on another critical opportunity for 2 more points for Detroit.

(P.S., I forgot to mention in my last post but all credit for this idea of recapping games from a fan standpoint goes to Steve Dangle, so go check him out on Youtube at https://www.youtube.com/user/SteveDangle) 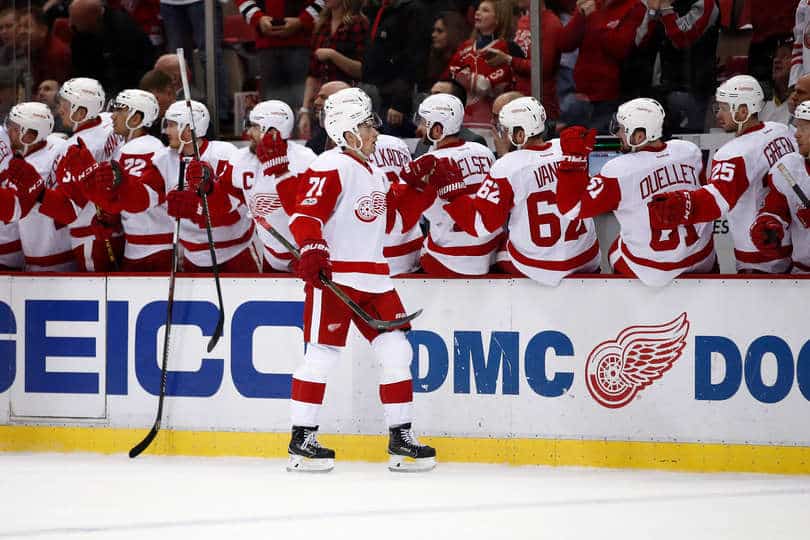