The Miami Heat were in the Big Apple in the midst of their road trip as they faced the Brooklyn Nets in the Barclays Center. In their last game, the Heat won an overtime thriller against Brooklyn, which saw Jimmy Butler lead the way for the Heat. Heading into this game, the Heat would be without Justise Winslow, who returned for Wednesday’s game against the Pacers.

The three-pointers were falling for Brooklyn, going on a fifteen to nothing run, before rookie Kendrick Nunn and Jimmy Butler ended the run for Miami. After a layup from Taurean Prince, the Nets led 17 to 7. The Heat would flip the script on Brooklyn, going on a sixteen to six run, but Prince and Timothe Luwawu-Cabarrot ended the run to keep the Nets in front. Bam Adebayo would tie the game at 27 for Miami, leading to a nineteen to five run to close the first quarter with the Heat ahead of Brooklyn 42 to 32.

Joe Harris and Dzanan Musa knocked down a basket and three-pointer respectively to start the second quarter for Brooklyn, while rookie Tyler Herro and Goran Dragic made a layup and a free throw for Miami in the same manner. After a three-pointer from Caris LeVert for Brooklyn, Miami answered right back with a three-pointer of their own from Duncan Robinson. With Miami leading 48 to 40, Spencer Dinwiddie and Jarrett Allen took over the Brooklyn offense, while Adebayo, Dragic, and Robinson kept the Heat’s lead afloat. With the Heat ahead 56 to 48, they closed the second quarter on a thirteen to nine run. By halftime, Miami led 69 to 57.

In the third quarter, Brooklyn jumped out of the gate as they went on a fifteen to eight run, but Derrick Jones Jr. and Herro ended the run for Miami with a dunk and a bucket respectively. After a three-point play each from Luwawu-Cabarrot and Dinwiddie, followed by a dunk from DeAndre Jordan, Miami now held an 85 to 84 lead. The Heat looked to distance their lead with baskets from Jones Jr. and Dragic, but a layup from LeVert and a basket from Luwawu-Cabarrot would tie the game at 89 to end the third quarter for Brooklyn.

As the fourth quarter commenced, Dragic knocked down a three-pointer and a free throw for Miami, followed by a layup from Jones Jr. and a three-pointer from James Johnson, giving them a 98 to 91 lead. Rodonis Kurucs and Dinwiddie picked up the offensive load for Brooklyn, but the Heat still kept their lead intact, giving them a 107 to 100 lead. The Nets went on an eight to nothing run to take the lead, only for Adebayo to put Miami ahead again. After a free throw from Dinwiddie and a three-pointer from LeVert, Brooklyn were now ahead 114 to 111. Butler would make a layup to keep Miami in the game, but it would be Harris making two free throws to give Brooklyn a 116 to 113 lead. The Heat needed a three-pointer to send the game into overtime, but would miss the shot and had no choice but to foul Harris, who would make a free throw to seal the game for Brooklyn, giving them a 117 to 113 victory over Miami.

Miami were up 109 to 100 in the middle of the fourth quarter, only for it to dwindle away as the Nets rallied towards the end of the contest. Brooklyn out-rebounded Miami 51 to 40, which was the main reason why they managed to outplay the Heat. Another reason was the Nets using the zone defense to stifle Miami’s offense, not allowing any cuts to the lane for any layups or baskets. The Nets’ offense were all over the place, mainly hitting from beyond the arc.

For the Heat, Jimmy Butler led the way with 33 points, Bam Adebayo with 22 points, Goran Dragic made 17 points, and Kendrick Nunn had 10 points.

For the Nets, Rodions Kurucs made 19 points, Taurean Prince had 17 points, Caris LeVert with 11 points, Timothe Luwawu-Cabarrot made 10 points, plus Spencer Dinwiddie and Jarrett Allen were in double-double figures. Dinwiddie with 26 points and 14 assists. Allen with 11 points and 11 rebounds.

The Heat finish their road trip on Sunday, when they enter Madison Square Garden to face the New York Knicks. Game starts at 3 and will be on Sun Sports. 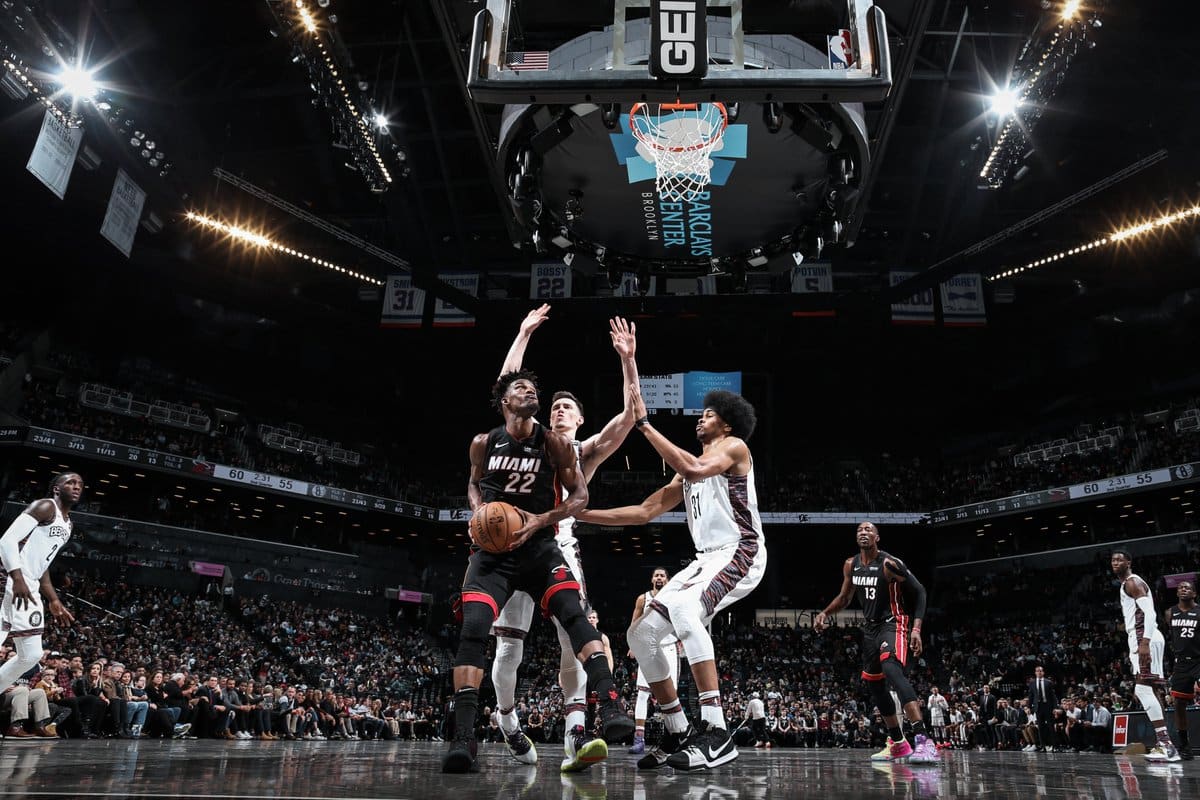