Initial hopes that Leeds might salvage English pride and beat North Queensland to become World Club Champions after a first half in which the Rhinos more than held their own against the Cowboys, were utterly dashed in the second half where the Australians played in a manner to which Leeds couldn’t even hope to respond.

Michael Morgan took an initial lead for North Queensland, but Rob Burrow was able to equalise in the 31st minute, with Leeds showing the kind of play they haven’t demonstrated so far this year. With a rout widely expected, it was heartening for the Headingly faithful to see the Rhinos they know and love finally emerge onto the pitch.

Unfortunately that wasn’t the same Rhinos team that came out of the tunnel for the second half. The first sign of trouble was when Ash Handley fumbled a catch, losing the ball for Kane Linnett to get the second try for North Queensland, which Johnathan Thurston converted. Leeds needed to respond to this quickly and they didn’t. The decisive moment though came about seven minutes later when North Queensland were awarded two penalties in quick succession. The second resulted in a try by Kyle Feldt, and even though Thurston didn’t convert this time, it didn’t matter.

While Leeds were able to press hard towards the middle of the second half, with Jordan Lilley narrowly denied a try, but it was a small break in North Queensland’s growing dominance of the game. Their fourth try, from Lachlan Coote, followed a quick kick through from Thurston who thoroughly stamped his brand upon the match. Every time he kicked, one of the tees used to support the ball ended up thrown to the crowd. The fifth try was Thurston’s own, and signalled the certainty of his rise to ‘immortal’ status just as much as his subsequent winning of both Man of the Match and the Graham Murray medal.

By this point Leeds were gone. Even more than Wigan against Brisbane or St Helens against Sydney, Leeds were left with nothing but the shirts on their backs and the frustration they felt over the score. Not long after Justin O’Neill got the sixth try for North Queensland, Mitch Garbutt earned himself the dubious distinction of being only the second player to be sent off in a World Club final. An incident between Keith Galloway and North Queensland’s James Tamou saw Garbutt land a punch on Tamou. The former was sinbinned, but Garbutt saw a red card and was told to leave the field. The inevitable suspension will hit Leeds even further as regards their injury weakened side.

While Josh Walters produced a last gasp of life from Leeds when he was denied a try due to being unable to ground the ball having got over the try line, Justin O’Neill had the last try of the match by which point those watching the game had only question that needed answering. Would Johnathan Thurston run out of tees to throw into the crowd before the hooter blew for the end of the match?

In the end Leeds were, at least, spared that indignity, but having lost by thirty-four points, it won’t feel like much of a relief. While there were smiles from some of the Rhinos players after the game, captain Rob Burrow gave the truth of it when he said ‘it’s no good going forty minutes; you’ve got to go eighty minutes’. Like Wigan and St Helens, Leeds were smashed aside by a team that had better staying power, better speed, better strength, and a better way of playing where looking for gaps in the Leeds defence was concerned. 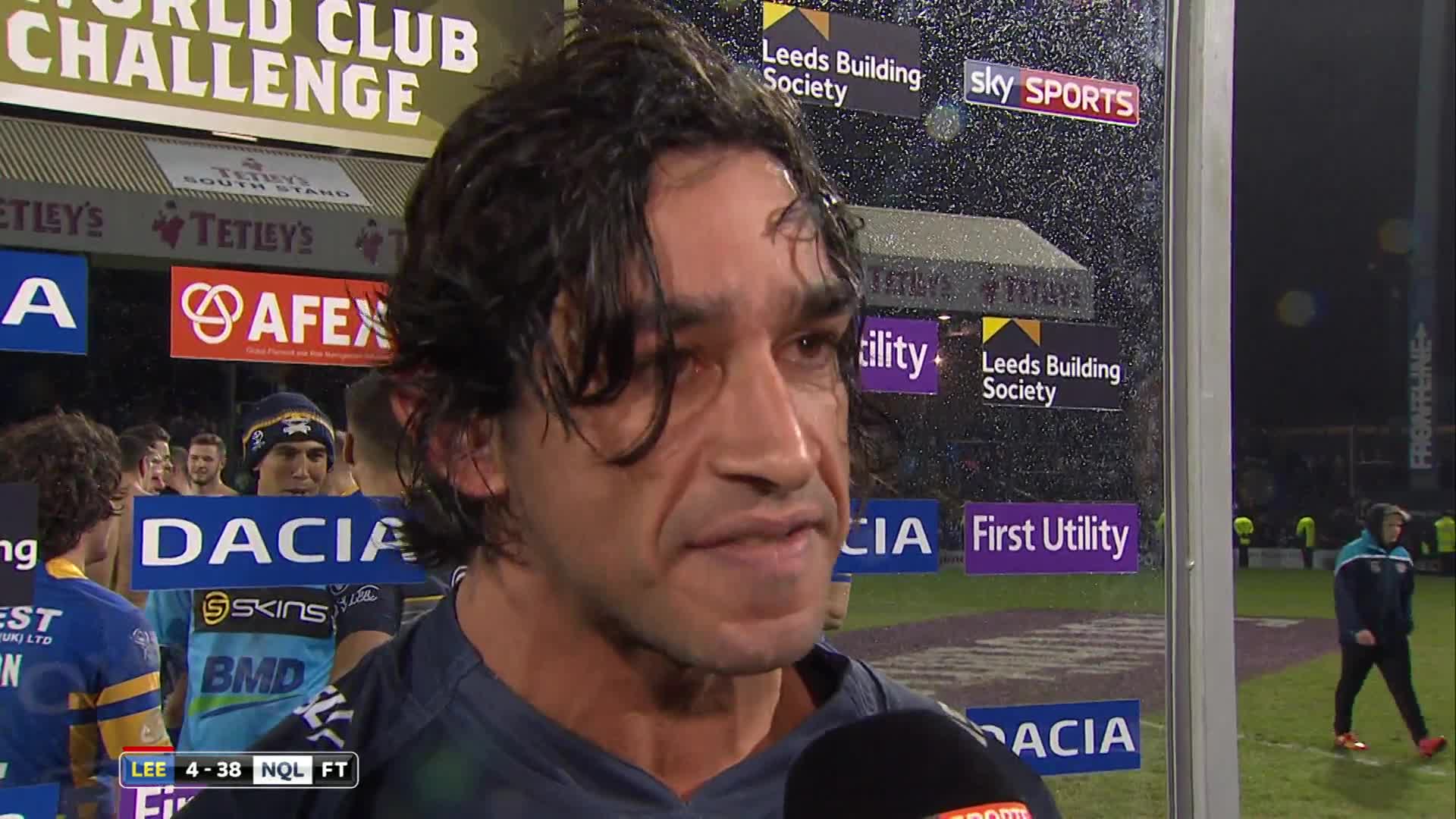