The Miami Heat looked to keep their undefeated record at the American Airlines Arena going as they hosted the Cleveland Cavaliers in a rematch from last Thursday. The Heat would be without Justise Winslow, Derrick Jones Jr., and rookie KZ Okpala, while the Cavs would be without John Henson and Tristan Thompson.

Larry Nance Jr. and Kevin Love got Cleveland on the board with their baskets, but it would be Bam Adebayo leading the early charge for Miami, making their first eight points in the contest, followed by a breakaway dunk from Jimmy Butler. After a layup from Collin Sexton and Larry Nance Jr., the Heat answered back with free throws from Butler and a layup from Kendrick Nunn, giving Miami a 14 to 9 lead. After a lob and a three-pointer from Nance Jr., the Heat went on an eight to nothing run, led by Nunn, Duncan Robinson, and Goran Dragic. Ante Zizic ended the run for Cleveland with a layup, but Miami responded with a bank shot from Dragic. With Miami leading 26 to 16, they closed the first quarter on a sixteen to seven run, despite committing eight turnovers. The Heat led 32 to 22.

Miami went on another run to start the second quarter, scoring eleven unanswered points, before a three-pointer from Cleveland’s Kevin Porter Jr. ended the run. Kelly Olynyk made a three-pointer of his own for Miami, only for Love to make a basket for the Cavs in return. The threes continued to fall for the Heat as Robinson and rookie Tyler Herro were knocking down buckets, increasing Miami’s lead further. With the Heat ahead 68 to 45, they went on another run, scoring sixteen unanswered before a three-pointer from rookie Darius Garland ended the run for Cleveland. By halftime, Miami led 75 to 48.

In the third quarter, Butler and Adebayo made a combined three free throws for the Heat, followed by a basket from Nunn, while Jordan Clarkson got himself on the board for Cleveland with a tip shot and an uncontested dunk. With Miami leading 80 to 55, Adebayo and Robinson more free throws for the Heat, followed by a put back from Chris Silva. Heat Captain Udonis Haslem would enter the game for Miami after a rousing ovation from the fans, making a free throw among the many points recorded by the Heat. After a pair of layups from Sexton for the Cavs, Miami led 99 to 77 by the end of the third quarter.

As the fourth quarter commenced, the Cavaliers looked to begin their rally as Sexton made a fadeaway jumper, followed by a three-pointer and a jump shot from Love. With the Heat leading 102 to 86, they fired back at Cleveland with a pair of threes from Herro and Butler, followed by two free throws from Olynyk. With Miami ahead 113 to 91, they went on a fourteen to nine run to win the game, en route to a 124 to 100 victory.

Much like their game from last Thursday, the Heat went wire to wire against the Cavaliers, maintaining their lead and being dominant throughout the contest. Also like the contest against Cleveland from last time, turnovers were prevalent. Miami committed 23 turnovers, but despite those statistics, the Heat made up for it with a high tally of assists and percentage of shots made. Miami shot 52.6 percent from the field, 51 percent from the three-point line, and 74 percent at the free throw line. It should be also noted that Miami made 75 points, tying for the most points they’ve made in the first half. Duncan Robinson made 9 three-pointers, the most any Heat player has ever made this season. Robinson was one three-pointer away from tying a Heat record. Along with those records, Miami still remains undefeated at home, going 6-0.

For the Cavaliers, Collin Sexton had 19 points, Larry Nance Jr. made 16 points, Jordan Clarkson with 12 points, Darius Garland had 10 points, and Kevin Love with a double-double of 25 points and 13 rebounds.

For the Heat, Duncan Robinson led the way with a season high 29 points, Tyler Herro made 22 points, Jimmy Butler with 21 points, Bam Adebayo and Goran Dragic made 13 points each, Kendrick Nunn had 11 points, and Kelly Olynyk with 10 points.

The Heat head out on the road as they face the Chicago Bulls. Game starts Friday at 8pm, and will be televised locally on Sun Sports. 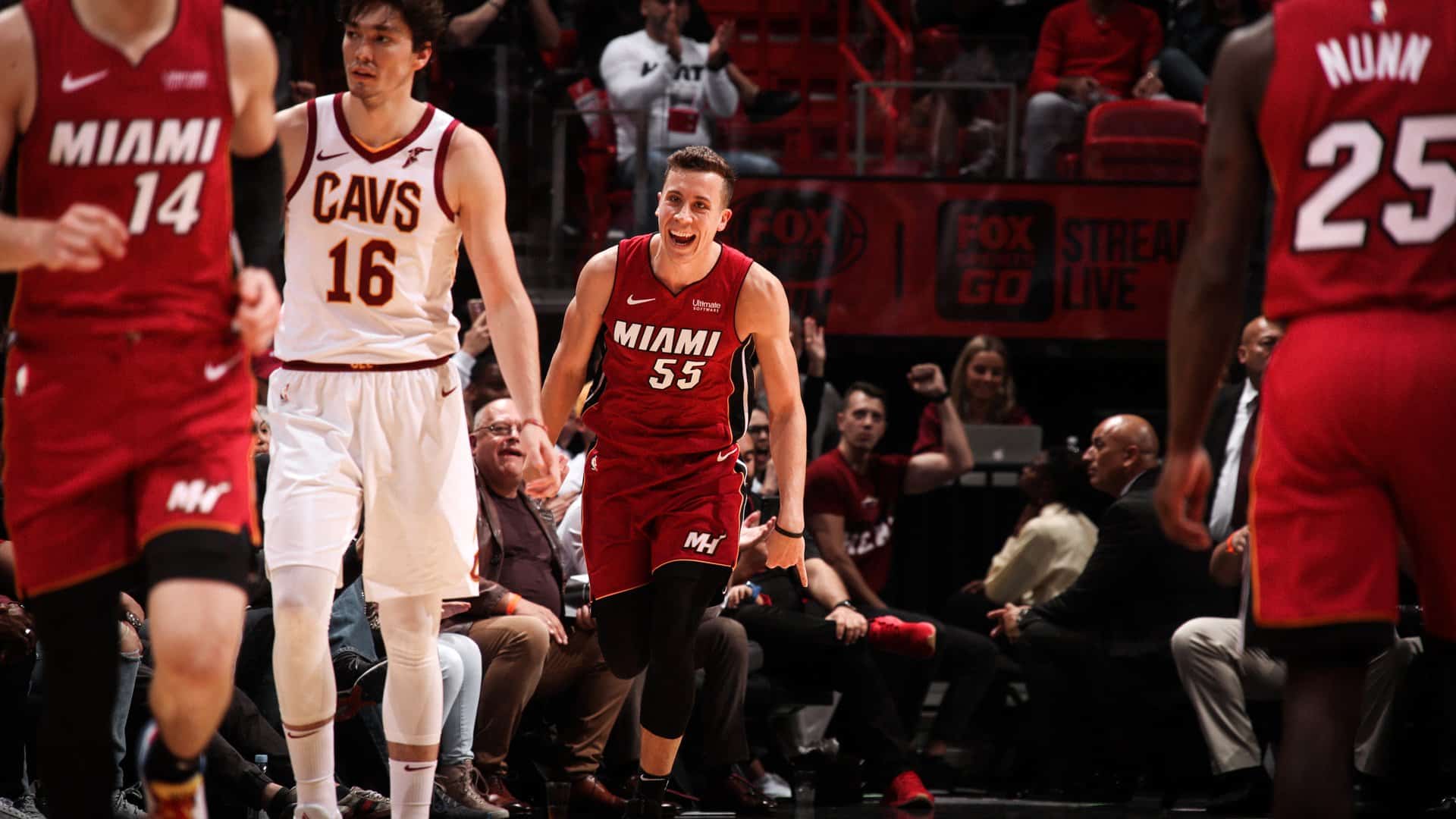