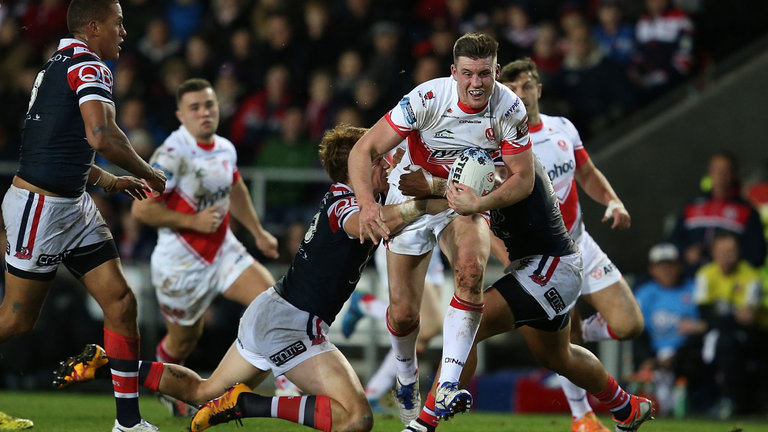 Keiron Cunningham made a threat to his players last week following Saints’s defeat to Salford. This week that threat had an effect, for it was a markedly better St Helens side that took the fight to Sydney Roosters. Unfortunately for Saints, Sydney visibly outclassed and outplayed them.

The result was not a whitewash, nor a rout, but a master class from Sydney in how to play great Rugby League. For the first quarter of an hour St Helens held their own, and at times even threatened to score, but even at this early juncture it was clear that Sydney were the better side, and when Kane Evans scored the first try for Sydney, the floodgates began to open.

Despite Jackson Hastings failing to convert St Helens began to fall apart as shock set in much the same way it did against Salford last week. That was disbelief. This was simply that sinking feeling that comes from being on the losing side against a team who get something out of every mistake you make. And get something Sydney did.

When Sydney scored their second try, and idea St Helens had of fighting back went out the window, and from there Sydney produced the same kind of game Salford did last week, only with visibly more speed and power. Blake Harrison made it fourteen points to nothing after a series of passes brutally exposed the deficiencies in the Saints defence. When Dale Copley went over the line for try number four, he put the game beyond Saints, whose penalty just before half time, when Kyle Amor was held down for two long in a clear obstruction, produced yet more frustration as Saints smashed helplessly against Sydney’s defence.

The second half went much the same as the first, only this time St Helens managed to score twice, but their revivals were brief. While Dominique Peyroux swooped in on a fumble by Blake Ferguson behind the line to give Saints their first points, and then again once a high tackle by Dylan Napa on Adam Swift saw Napa sent to the sin bin and Sydney down to ten man, it was as much luck as it was skill on the part of St Helens, and again, Sydney never failed to pass up an opportunity Saints presented.

While Tommy Makinson was exceedingly unlucky not to score a try of his own, as the ball slipped from his fingers at the end of a fantastic drive by Saints, Sydney’s recovery was devastating with Shaun Kenny-Dowall storming past the St Helens players and scoring a try that set up an easy conversion for Jackson Hastings. That however was nothing to the sheer talent and drive on display for Sydney’s last two tries. Aidan Guerra showed off his agility as he sidestepped Saints defenders before scoring try no 6 for the Roosters, before Daniel Tupou, earlier denied a try following a knock on against Luke Walsh’s chest, ran the full length of a pitch to deliver the final blow. Again Hastings easily converted and Saints lost 38-12, with a deficit more than twice the number of points they managed to score.

A great result for Sydney, who can start the new NRL season full of confidence. While Kane Evans won man of the match, it could have gone to any of his teammates. Jayden Nikorima in particular was superb, helping to run Saints ragged after a knock to the head had seen him escorted off the pitch early in the game. Issac Liu too produced some thrilling rugby, with Saints players reduced to nearly pulling his shorts off at one point, such was his ability to tear through their line.

As for Saints, while they finish tonight without the same 39-0 whitewash that was the result of their last game against Sydney, they face Hull Kingston Rovers next week in a game that has now, only two weeks into Super League, become a must win for them, if Keiron Cunningham and assistant coach Paul Scunthorpe are to have any chance of driving their players towards this year’s Grand Final.

Saints desperately need to improve the quality of their rugby, and the thought behind it. While Sydney did use brute force to drive through at times, more often they kept the ball alive through clever passes or simply agility, much the way Salford did last week. Saints must show they can do the same if they are to have any hope of reaching the playoffs this year. As must Wigan when they play Brisbane tomorrow night, hoping to avenge not only last year’s defeat, but a loss also to Sydney, by an only slightly less embarrassing scoreline in 2014.

I'm a writer and photographer looking for new opportunities. I've written for a range of publication...
0