The New York Giants had another disappointing season in 2015 as they slumped to a 6-10 record and failed to make the play offs for the fourth straight season.

The New York Giants struggled in an number of areas during the 2015 season, most notably in defence and the upcoming draft, which starts on April 28, gives them the opportunity to rectify this as they hold the tenth overall pick, but who should they choose in the first round?

The Eastern Kentucky defensive end would no doubt improve the Giants’ defence who were ranked bottom of the NFL in 2015. Spence is arguably one of the best pass-rushers in the 2016 draft, a skill very much in demand in the NFL especially after the success of the Denver Broncos DE Von Miller whose MVP performance in the Super Bowl was pivotal in the Broncos victory over the Carolina Panthers.

Although there is no doubting Spence’s talent on the field, there are question marks over his conduct off the field due to a number of failed drugs test while he was at Ohio state. This lead to being thrown out of the college and he went for treatment for drug addiction before switching to Eastern Kentucky.

His performance at the NFL combine which starts on 23 February could be key for spence, if he does well he could go in the first round, a poor performance could see him slide into later rounds. However under the right guidance he has the potential to be an elite player in the NFL.

His impressive athleticism and ability to play in a number of positions, highlighted by him being awarded both offensive and defensive freshman of the year in 2013, makes the UCLA linebacker one of the most exciting prospects in the whole 2016 draft. His speed and awareness means that he will be able to cover tight ends and running backs.

Jack’s main weakness is his size, he is on the small side compared to a traditional NFL linebacker, this coupled with the fact that he is not the most explosive hitter could mean he takes a while to adjust to the NFL.

As well as this he also suffered a knee injury which ended his season early and will mean he is not able to take full part in the combine which will concern the Giants who are one of a number of teams being linked with taking Jack in the draft.

Giants may find it difficult to select Jack unless he falls slightly down the draft as he is currently projected to be a top five pick.

Lawson comes into the draft on the back of an impressive 10.5 sack season at Clemson. He would give the Giants defence some much needed solidarity with his impressive size and power at the line of scrimmage, his discipline will also be welcome as the Giants conceded the fifth most amount of penalty yards the regular season in 2015. Lawson also possess the ability to play both the run and pass extremely well, which will be a big advantage to any team that drafts him.

It is difficult to see many weaknesses in his game but his lack of experience could be an issue with him only having one season as a starter under his belt.

However Lawson has shown he has immense potential to be a star in this league and for that reason the Giants need to take the defensive end into consideration when selection their first round pick.

Although it is obvious to see that the Giants defence is the area which they need to strengthen, they may be tempted into making a move for a new running back, a position in which no one in the current roster has managed to nail down as their own.

Ezekiel Elliott has impressed during his time at Ohio State and has all of the natural abillity which makes a good running back including raw speed and agility as well as being the ideal size for the role. Elliott rushed for a total of 1,821 yards during the 2015 season including 12 one-hundred yard games.

All of the psychical attributes seem to be there with this prospect, the only question mark that can be labelled at Elliott could be about his personality after he criticised his own team after a loss to Michigan state, citing the lack of carries he was given as the reason for the defeat.

Despite this, if the Giants want a new running back there is no better option in this year’s draft than Ezekiel Elliot.

An out and out playmaker who would certainly improve the Giants defence instantly with his exceptional speed and explosiveness, which has gained him a reputation as one of the toughest tacklers in the country. In the 2015 season Smith recored 114 tackles including six games of more than 10 tackles or more.

He has also shown his versatility as he has played all of the linebacker roles during his time at Notre Dame and has performed equally well in each position.

A weakness of Smith is his size, at 6’2 and 235 pounds he could potentially struggle if he comes up against a much bigger lineman. This could however be easily solved and should not put anyone off picking the Linebacker early in the first round.

He would however be a definite upgrade for the Giants on what they already have in that position. 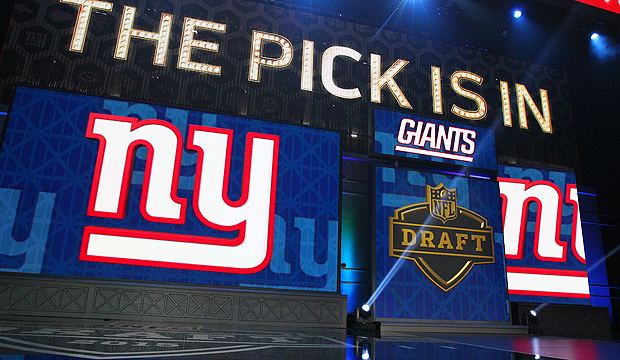