Hill and the Saints agreed to a contract extension for four years and $40 million with $22.5 million guaranteed for injury and $20 million fully guaranteed.

New Orleans’ QB Taysom Hill signed a unique four-year, hybrid-type of contract extension that could be worth anywhere between $40 million and $95 million, depending on the position he plays, and includes $22.5 million guaranteed, sources tell ESPN.

Adam Schefter reported that Hill’s new deal will pay him $40 million over the next four years if he remains in his current role in which he serves as backup quarterback, running back, wide receiver and tight end, as well as being a special teams ace. However, the deal can be worth up to $95 million if Hill becomes the Saints’ starting quarterback over the next four years.

Hill, 31, was scheduled to become a free agent after this season after he signed a two-year, $21 million extension with the Saints in 2020.

The Saints had some salary-cap incentive to get an extension done with Hill before his contract voided next spring. They would have been hit with $8.9 million in dead-money charges against the cap when his contract expired — and now they can spread those cap charges over future seasons.

But the Saints (5-5) are also showing how much they still value Hill as part of their offense going forward, even though he lost the starting quarterback battle to Jameis Winston this summer and has not yet overtaken the current starter Trevor Siemian in the role.

Hill is now guaranteed to be part of the Saints’ future in one capacity or another. What remains to be seen is how seriously New Orleans considers him as a starting QB candidate for the rest of this season.

Part of the reason Hill hasn’t started any games at quarterback so far this season is that he was dealing with a concussion in Weeks 5-8 and a foot injury this past week that held him out of practice on Wednesday and Thursday. It remains unclear whether the Saints will consider switching from Siemian to Hill at some point to help shake them out of their current three-game losing streak.

Siemian has performed fairly well in the role over the past three and a half games. However, he had his worst struggles to date in Sunday’s 40-29 loss to the Philadelphia Eagles, with two interceptions, including a pick-six in the final minute before halftime.

The Saints have a short week to prepare for Thursday night’s game against the Buffalo Bills in the Caesars Superdome.

Hill has had a quiet season so far. He is 7-of-8 passing for 56 yards with no touchdowns and one interception. He has run the ball 20 times for 104 yards and three TDs. And he has four catches for 52 yards.

When asked two weeks ago whether he hopes to receive another opportunity at the starting QB job, Hill said, “Of course.”

“I think I’ve been transparent from day one about what the end goal has been here for me. So I don’t really know what to say other than you do your best to stay ready,” Hill said. “Obviously there’s this whole other role that’s there for me. So I’m trying to find a balance of staying ready to be able to do that job at a high level, but it’s not always the easy thing, because there’s this whole other expectation for me that I need to make sure I’m prepared to do. So I’m trying to manage that.”

Hill’s future as a starting QB would seem to be an uphill battle, but his ability to be a game-changer as the team’s Swiss army-knife, jack-of-all-trades option will remain a calling card of head coach Sean Payton’s offense. 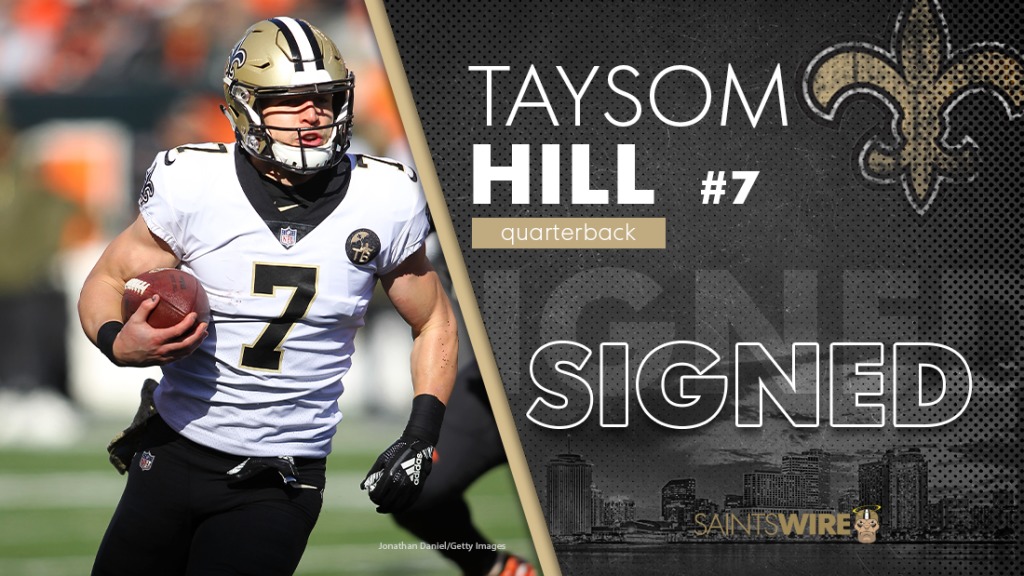