Last week’s news of Saints quarterback Drew Brees being out for a broken thumb would no doubt give many the impression that the Seahawks could have this game in the bag. Whilst many will be disappointed not to see two of the greatest quarterbacks in the NFL this is still a game that will prove to be utterly competitive and close to the crunch. Here are the key areas that could prove to test the Seahawks as they seek a third win in wk 3.

The Back up Quarterbacks

Teddy Bridgewater and Taysom Hill are both impressive quarterbacks in their own right. Saints head coach Sean Payton has been vague all week as to which will be the starter but the smart thing would be to utilise the vast skills of both of these quarterbacks. They both have the speed and agility to keep the Seahawks defense on their toes and can slide away from a tackle with all the skill that Russell Wilson often deploys. Teddy Bridgewater will get the edge on starting with one game already under his belt in the 2019 season where he had 17 completions and threw for 165 yards, averaging 5.5 yards. Taysom Hill has been gaining a reputation as the Saints offense swiss army knife. His ability to move seamlessly between wide receiver, quarterback and special teams will give the Saints offense the flexibility to adjust as their needs arise.

The biggest threat to the Seahawks will be how versatile the Saints offense will be. Their run and
pass game has equal strengths and they are able to flip between the two as required. The Seahawks defense will be looking to clamp down early on the two players that stand out the most in these two areas; running back Alvin Kamara and wide receiver Michael Thomas. In two games Kamara has already notched up 142 yards on 26 carries and will be seeking to get his first touchdown of the season. Michael Thomas has 20 receptions for 212 yards and is averaging a monster 10.6 yards per carry. Both are notoriously difficult to contain and the Seahawks defense can expect their work to be cut out facing this duo.

The Saints defense was one of the strongest in the NFL last season and they have launched into 2019 with the same gusto. They have already put up an astounding 9 sacks in just 2 games. The Seahawks offense has notoriously struggled on first downs and so far they have just 52 yards on 29 runs with an average of just 1.8 yards per attempt. With a Saints defense that is so strong in pressuring and blitzing the quarterback the pressure is going to be on the Seahawks offensive line to ensure Russell Wilson has protection in the pocket. He will not want a repeat of the last few seasons where he has spent more time scrambling than throwing the ball.

Whilst the Seahawks pride themselves on a run heavy offense, they utilised the pass option far more effectively in their last game against the Steelers. In the process they put up some impressive yardage numbers, Tyler Lockett with a 44-yard catch and D.K Metcalf with a 28-yard touchdown pass. It will be interesting to see a newly evolving Seahawks offense that is no longer seeing the run game feature so heavily as in previous seasons be put to the test by one of the league’s most dangerous defenses. 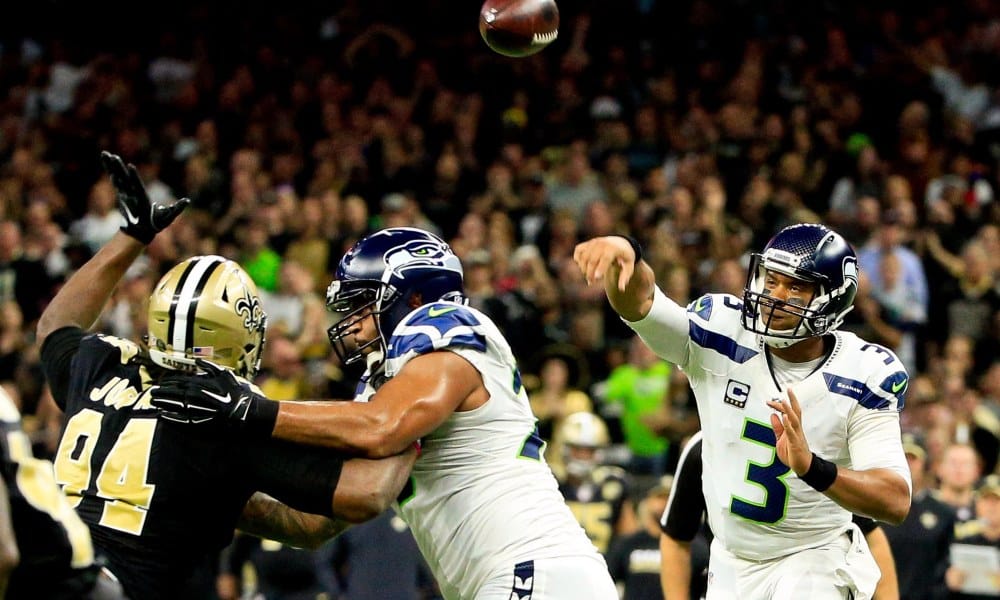