It didn’t take long for Indian cricket team in the morning session to register an empathetic win over the suffering England side. In just 8 overs and 32 minutes R Ashwin managed to outperform the visitor side to take a 3-0 lead in the ongoing Paytm series.

The 3-0 series win also stretched India’s unbeaten run to 17 Tests, equaling the national record set in the 1980s.This team has won 13 out of the last 17 matches. R Ashwin’s 6 for 55 took his series haul to 27, with his home Test in Chennai still to come.

The off spinner removed rigid Bairstow with a carom ball in the 3rd over of the day and cleared up Woakes in the next. Bairstow immediately asked for the review but this time the DRS did not came to Bairstow’s rescue. The replay showed that the ball smashed the stumps and it saw Bairstow making his way back to the pavilion. Once he was gone for 51 it was easy for the Indians to wrap up the remaining English tail. Chis Woakes was bowled through the bat- pad by Ashwin in the next over and Adil Rashid handed a simple catch straight to KL Rahul at deep mid-wicket.

The only fight that England managed to put was the Verbal kind where Jimmy Anderson lashed out at Indian spinners along with Virat Kohli. Kohli and Parthiv also was a part of the heated discussion and had their say before the umpires stepped in to restore some decorum. After the exchange of words, Anderson chipped Ashwin tamely to mid-wicket, where Umesh Yadav completed the catch and which marked the end of the England second innings. R Ashwin finished with magic figures of 12 wickets for 167 in the match and England where bowled out for 195 thus handing India a perfect win.

England is the first team to post a total of 400 runs in the first innings and losing by an innings at the Wankhede. Brilliant performances from Murli Vijay, Jayant Yadav, and Virat Kohli along with bowling duo R Ashwin and R Jadeja was the reason for India’s success against the English side in the fourth test.

A victory by an innings and 36 runs has put England’s first innings total to shame and it has to be said that their poor bowling completely let them down as a unit.

The major positive for India from this test is the find of an able alternative in the form of Jayant Yadav for R Ashwin.

Murli Vijay return to form, R Ashwin & R Jadeja’ s bowling excellence and Kohli’s continuous dream run are other major positives for India ahead of the fifth test at Chennai. 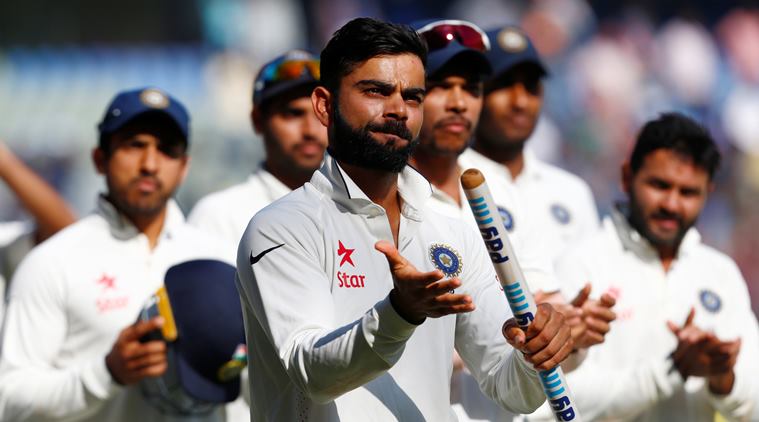