Darren Stevens smashed a massive century for Kent while Leicestershire collapse in their game at Hampshire as once again rain dominated the County Championship action with 4 games seeing no play at all while 2 more saw 20 overs or less on their respective Day 2s.

Resuming on 159/7, the visitors would add 7 to their overnight score before Danny Briggs and Liam Norwell would be dismissed to successive Peter Siddle deliveries, caught by Walter and bowled respectively, before Tim Bresnan would be last man out for 50 the following over, caught by Sir Alastair Cook off the bowling of namesake Sam, with the score on 166.

The Essex reply would see Nick Browne caught behind by Michael Burgess off the bowling of Norwell for 4 with A. Cook (11) and Tom Westley (1) the not out batsmen when the heavens opened.

Resuming on 223/7, Hampshire would add 9 to their overnight score before Keith Barker would be caught out by Rishi Patel off the bowling of Chris Wright for 24 before Kyle Abbott would be LBW to the same bowler at the end of the over for 5. Brad Wheal was the last man out as he was caught by Hassan Azad off the bowling of Ed Barnes, who would end the innings with bowling figures of 4/61 from his 19 overs.

The Leicestershire reply got off to a dreadful start with openers Azad (0) and Sam Evans falling both LBW to opening bowlers Abbott and Mohammad Abbas respectively in the opening 3 overs. Australian Marcus Harris (2) would be bowled by Abbas with 8 on the board before Abbott would dismiss Colin Ackermann the same way for the same score in the following over. The South African would also have Lewis Hill caught behind for 3 with Patel (13) and Harry Swindles (2) the not out batsman as the day’s play was ended after just 77 balls following more rain.

Only 18 overs were possible on Day 2 with the hosts resuming on 146/6 with Hashim Amla (24) and Rikki Clarke (19) moving the score onto 185 before the South African top-order batsman was bowled by Tom Helm before Clarke was caught behind by John Simpson off the bowling of Josh Cullen.

Resuming on 70/2, the hosts would lose Jack Leaning LBW to Michael Neser early for 2 with Jordan Cox (27) and Daniel Bell-Drummond (0) also falling to the Aussie quick. Captain Sam Billings would be judged LBW to Timm van der Gugten for 11 before Marcus O’Riordan would be dismissed for a duck in the Aussie-born Netherlands international’s next over then the game turned into the Darren Stevens show. The 45-year-old all-rounder would score 190 off 149 balls (including 15 fours and 15 sixes) with Nathan Gilchrist (12, LBW to Neser) and Miguel Cummings (7) holding up an end before both would get out to Marnus Labuschagne leaving Matthew Quinn 7 not out.

The Glamorgan reply would see Quinn dismiss David Lloyd for 4 in the third over of the innings before Stevens would remove Labuschagne for 11 in the sixth over. Opener Joe Cooke (10) and Billy Root (21) would see the Welsh county to 55/2 at the close. 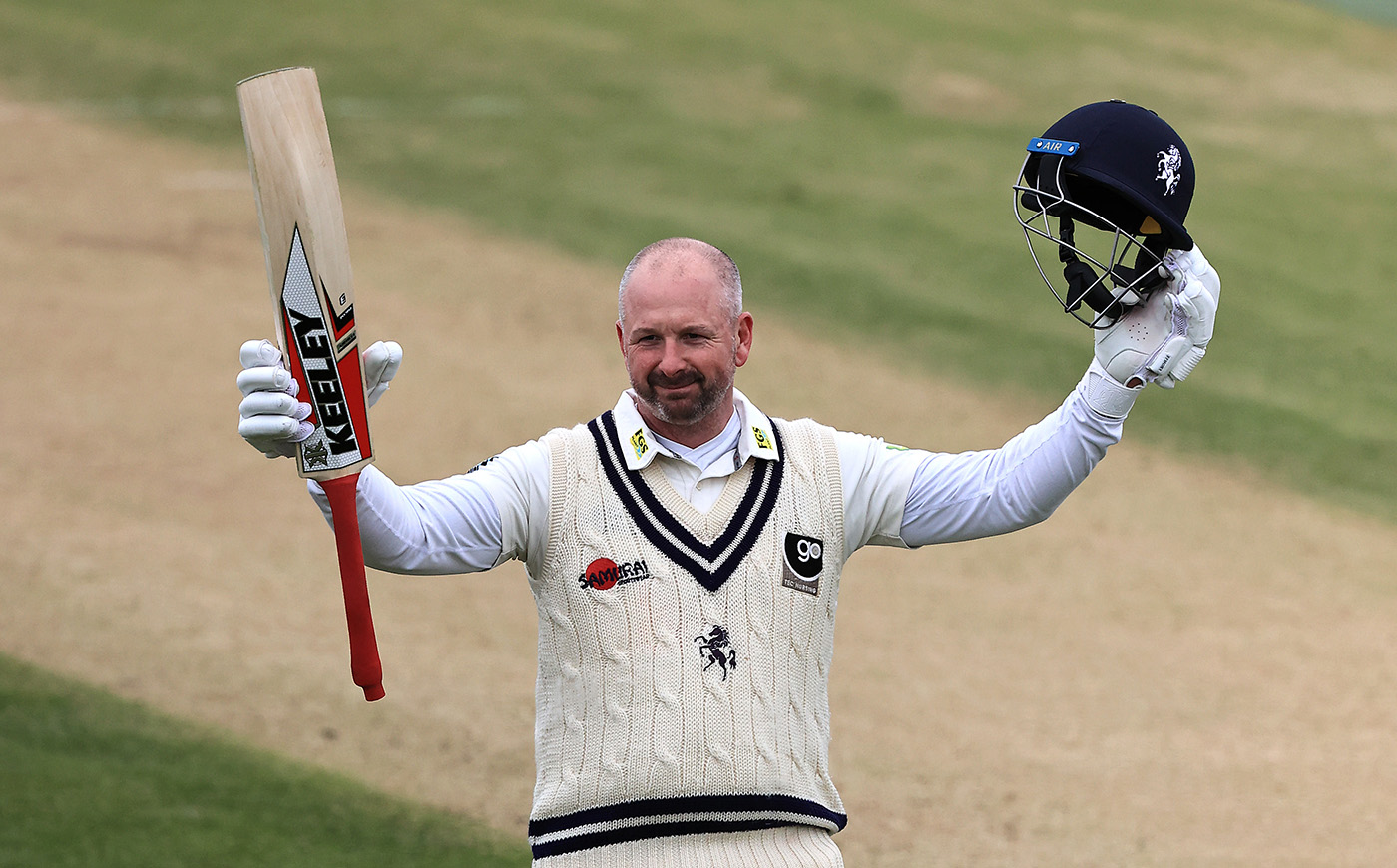