Stockholm, Sweden hosted a Diamond League meet on Sunday, August 23. Multiple new records were set at this meet, a testament to the training athletes around the world have been putting in amidst the coronavirus pandemic.

The men’s and women’s pole vault events kicked off the day. In the men’s event, Armand Duplantis of Sweden led the pack throughout the competition, easily clearing heights that knocked many of his competitors out of the competition early on. His final clearance at 6.01m not only won him the gold medal, but it also set a new meet record and made him the world leader in the event.

Ben Broeders of Belgium and Sam Kendricks of the USA finished second and third respectively. Broeders’ best jump was 5.73m, a new season’s best for him that beat his previous best mark by two centimetres. Kendricks’ jump of 5.53m was enough to secure the bronze medal.

On the women’s side, it was a tight contest between Holly Bradshaw of Great Britain and Angelica Bengtsson of Sweden for top spot. They were the only two competitors to clear 4.62m, but it was the next height of 4.69m that knocked Bengtsson out of the competition for a second place finish. Bradshaw cleared that height, but met her match at 4.74m. She took home gold, with her best jump being 4.69m.

Michaela Meijur of Sweden and Tina Sutej of Slovenia tied for third with their best jumps both being 4.52m.

Ukrainians Yaroslava Mahuchikh and Yuliya Levchenko battled it out for top spot in the women’s high jump. After eventual third-place finisher Nicola McDermott of Australia failed to clear 1.96m, Mahuchikh and Levchenko moved up in two centimetre increments. In the end, it was Mahuchikh who won the event with a jump of 2.00m while Levchenko’s best was 1.98m.

Mahuchikh’s jump set her as the new world leader in the event.

In the horizontal jumps, Ruswahl Samaai of the Republic of South Africa won the men’s long jump with a jump of 8.09m. This set a new season’s best for Samaai. Thobias Montler of Sweden and Kristian Pulli of Finland finished second and third respectively, both of whom also put in jumps over 8 metres.

Ukraine earned another medal in the women’s long jump when Maryna Bekh-Romanchuk landed a jump of 6.85m, beating her old season’s best by nine centimetres. Caterine Ibarguen of Colombia and Khaddi Sagnia of Sweden finished second and third respectively.

In the circle, the men’s discus throw saw a one-two finish for Sweden. Daniel Ståhl claimed the top spot with his toss of 69.71m, while teammate Simon Pettersson came second with a throw of 67.72m, a new personal best for Pettersson.

Andrius Gudzius of Lithuania took the final spot on the podium with a throw of 66.80m.

The first track event of the day was the women’s 100m hurdles. Luminosa Bogliolo of Italy led the way down the track to win gold. She crossed the line in a time of 12.88. Lotta Harala of Finland and Mette Graversgaard of Denmark ended in a close two-three finish, with Harala just edging out for the silver. Her time was 13.07, while Graversgaard’s time of 13.13 was enough for the bronze and to set a new national record in Denmark for the event.

The women’s 400m hurdles were the next event on the track, where Femke Bol of the Netherlands raced her way to a first place finish in a final time of 54.68. Anna Ryzhykova of Ukraine was second in a time of 55.19, and Amalie Iuel of Norway crossed third at 55.92. Both Ryzhykova and Iuel ran season’s best times.

The men also competed in the 400m hurdles that day. Leading the pack was Karsten Warholm of Norway, who finished first in an impressive time of 46.87. Not only was this a new personal best for Warholm, but it also set new Diamond League and meet records in addition to making him the world leader in the event.

Wilfried Happio and Ludvy Vaillant, both of France, finished second and third respectively. Happio’s final time was 49.14 with Vaillant right behind at 49.18. This was a season’s best performance for Vaillant.

In the women’s 100m dash, it was Ajla Del Ponte of Switzerland who beat out the field for first place. Her time of 11.20 just edged out second place finisher Marije van Hunenstijn of the Netherlands, who crossed the line in a time of 11.28. Rounding out the field was Marie-Josée Ta Lou of Ivory Coast at 11.32.

Donavan Brazier of the USA ran his way to a gold medal finish in the men’s 800m with a time of 1:43.76. Canadian Marco Arop took home silver with a time of 1:44.67, and Andreas Kramer of Sweden claimed bronze with 1:45.04, a new season’s best performance for Kramer.

The USA hoped to repeat their gold medal finish in the women’s 800m where Raevyn Rogers was competing. She couldn’t hold on to the top spot though, ultimately finishing second with a time of 2:01.02. Claiming gold was Britain’s Jemma Reekie, who crossed the finish line in 1:59.68. Rounding out the field was Hedda Hynne of Norway with a time of 2:01.44 for the bronze.

The USA claimed its second gold medal in the track events when Wadeline Jonathas finished first in the women’s 400m with a time of 51.94. Laviai Nielsen of Great Britain took home silver and a new season’s best with her time of 52.16. Lieke Klaver of the Netherlands earned bronze with her effort of 52.35.

Adam Gemili of Great Britain won the men’s 200m with a time of 20.61. Felix Svensson of Sweden and Silvan Wicki of Switzerland finished second and third respectively, separated by a couple thousandths of a second.

The lone distance event of the meet was the 1500m. In the women’s event, Great Britain claimed all three spots on the podium. Laura Muir crossed the line first with a time of 3:57.86, which made her the new world leader in the event. Silver medalist Laura Weightman ran a new season’s best with her time of 4:01.62, while bronze medalist Melissa Courtney-Bryant ran a personal best at 4:01.81.

On the men’s side, top spot went to Timothy Cheruiyot of Kenya. His final time of 3:30.25 was less than two seconds off his personal best. Right behind him was Jakob Ingebrigsten of Norway at 3:30.74. Third place finisher Stewart McSweyn of Australia ran 3:31.48, a personal best for him. 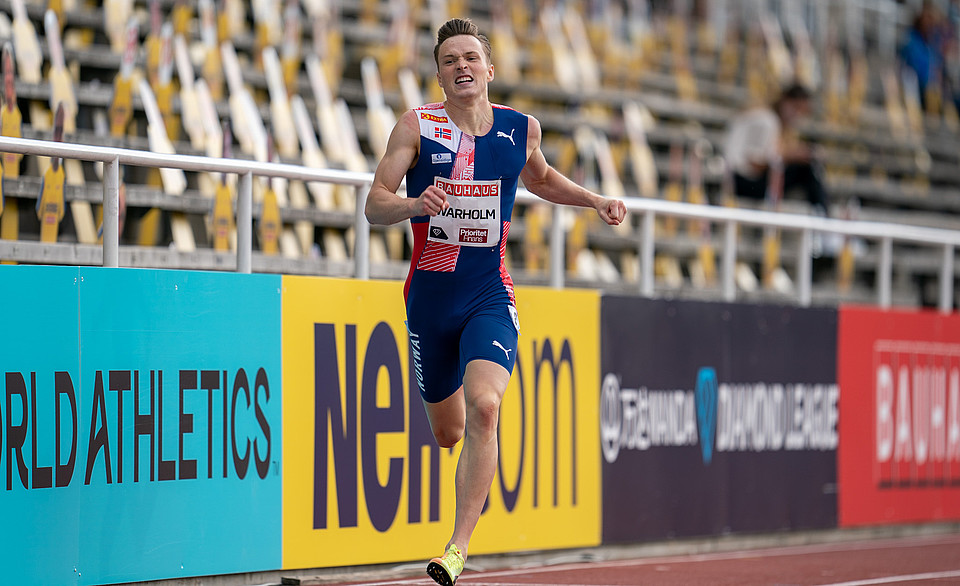