The season ended on Sunday night, as the home team the Los Angeles Rams won the Super Bowl at their home ground against the underdogs Cincinnati Bengals in a close game 23-20.

After the induction, ceremony, and national anthem, then comes the coin toss. Apparently, if a team won the coin toss there will end up losing the match, it has happened the last seven Super Bowl matchups. The Bengals won the toss but chose to defer to the second half, so the Rams will receive the ball first.

The first quarter, it was an all-defence battle out first as both teams’ offence still finding their feet. But it was not too long till the Rams kick start their offence and are explosive. The rams scored the first touchdown in the game when quarterback Matthew Stafford threw a pass to Wider receiver Odell Beckham Jr to put the Rams 6-0 and then kicked an extra point afterwards making it 7-0. The Bengals tried to score but fell short and only manage a field goal in the first quarter making it 7-3.

In the second quarter, the Rams continue to dominate in the first part of the second quarter which lead to Stafford Touchdown passing to Wide receiver Cooper Kupp giving the Rams a comfortable lead 13-3. They should have an extra point, but the Rams punter Hekker mishandled the snap, then threw an interception to Bengals Linebacker Germaine Pratt keeping the Rams lead at 13–3.

Things went from bad to worst for the rams, as Beckham went out injured and suffered a knee injury, it was painful to watch for not only the rams but everyone watching. Before the end of the first half, Bengals scored a touchdown, quarterback Joe Burrow threw a pass to Wide receiver Tee Higgins for a 6-yard-touchdown and an extra point followed cutting the lead to 13-10.

After the halftime show, things went completely south for the Rams as the Bengals came out of nowhere and scored an unanswered touchdown putting the Bengals 13-16. It should have been called back for pass interference because Bengals wide receiver Higgins grabbed Rams cornerback Jalen Ramsey facemask but somehow the officials did not see it and an extra point occurred leading to 13-17 for the Bengals.

Then moments later, Stafford threw an interception pass which was caught by Bengals cornerback Chidobe Awuzie. This was a huge advantage for the Bengals as there manage to capitalize this and secure a field goal making it 20-13. The rams struggled throughout the third quarter, could not get anything going and only manage to get a field goal cutting it down to 20-16.

Fourth & final quarter, it started to get intense for both teams. Both teams defence held their own and manage to keep their team in the game, but it was the rams who wanted more the most. During the final 2 minutes of the game, the Rams was building momentum while the Bengals defense started to cripple and panic which lead to so many penalties that gave the rams offence a good field advantage.

The rams finally capitalize the advantage as Strafford found Kupp to score his second touchdown in the game and an extra point succeeded which led to 23-16 lead for the Rams with over a minute to go. The Bengals was gaining momentum in the final seconds of the match but Rams defensive tackle Aaron Donald made the decisive play that led to the Rams winning the Super Bowl.

The match ended 23-16, Rams victory. It went down to the wire in a close battle between the two teams but again the Rams wanted it more. Wide Receiver Cooper Kupp was awarded Super Bowl MVP for his standout performance, Odell Beckham deserves a shout for his performance before the injury and huge credit to quarter Matthew Stafford for keeping his composure and not losing his cool. This is the rams second Super Bowl trophy but the first time as the Los Angeles Rams, the previous Super Bowl victory there were known as the St Louis Rams. 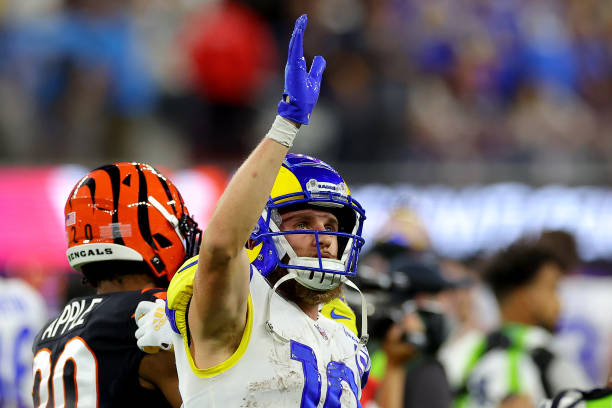