Rahul Tewatia hit 5 sixes in an over as Rajasthan Royals chased down the highest score in Indian Premier League history to beat Kings XI Punjab by four wickets on Sunday.

Tewatia hit Sheldon Cottrell for five sixes in the 18th over and added another six of the next ball he faced as Rajasthan chased down 224. Jofra Archer hit 13 from 3 balls to see the side home.

Rajasthan beat their own record – they had chased down 215 against the Deccan Chargers in 2008.

Jos Buttler returned to the squad after completing his 6 days isolation. However, he scored just 4 runs. Steven Smith, who opened the innings, added 81 runs with Samju Samson for the 2nd wicket. He was dismissed for 50 (27 balls). Samson then took the charge. He went on to score 85 runs from 42 balls and added 61 runs with Tewatia.

Tewatia’s innings was even more commendable, given he was struggling to score early in his innings. He had scored just 8 runs, without hitting any boundary, off the first 19 balls he faced.

However, once he got going, records started to tumble. Rajasthan added 86 runs after the 15th over, which is the most in a successful run chase.

Earlier, Kings XI Punjab captain KL Rahul and his opening partner Mayank Agarwal gave the team another blistering start. They added 183 runs for the first wicket in 16.3 overs. While Rahul didn’t look as convincing as the last game where he scored a century, his childhood friend Mayank made up for it.

Mayank got to the 2nd fastest century by an Indian in the IPL, reaching the milestone in just 45 balls. He hit 10 fours and 7 sixes. Tom Curran pulled things back a bit by bowling an economical over and also dismissing Mayank. However, Nicholas Pooran ensured Punjab capitalised on the solid foundation.

Pooran hit 3 sixes in the 8 balls he faced to finish with 25 runs. Glenn Maxwell also hit a couple of boundaries as KXIP posted 223 runs after being invited to bat first.

Kings XI Punjab’s Nicholas Pooran saved a boundary with an unbelievable piece of fielding in the deep, much to the amazement of everyone who saw it. Pooran leapt full length over the rope and then remarkably managed to flick the ball back into play before hitting the turf to deny Sanju Samson a six.

The effort saw Jonty Rhodes stand from his chair before applauding and bowing down. 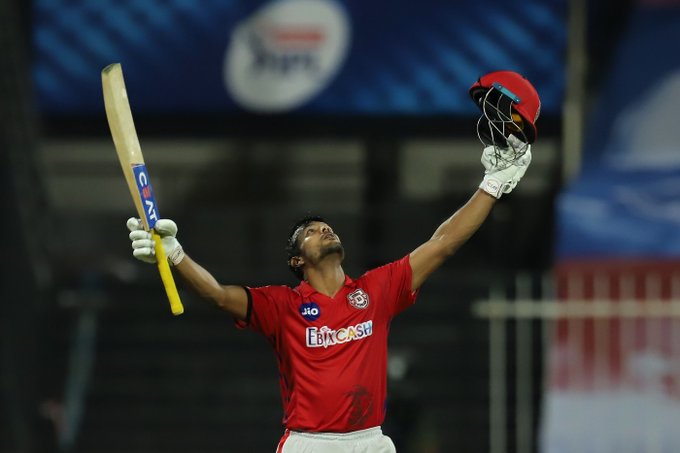