“I saw this innings via a social distancing gap between myself and the television. To truly have the visceral thrill of Pietersen’s 158, you needed to be at The Oval on 12 September 2005.”

“Just because I’ve got a stupid haircut or diamond earrings, it’s not going to make me cover drive a ball any differently.” Kevin Pietersen arrived on the international scene in full technicolour.

In early 2005, KP entered the lion’s den of his native South Africa, blasting three one-day centuries to subdue the locals. We knew then that the man had more balls than were flying into the stands at Centurion, East London and Bloemfontein. Duncan Fletcher and Michael Vaughan took a punt on a peacock who had content behind the preening. Graham Thorpe made way. It was Pietersen who would face the Australians to try and reclaim the urn.

The 2005 Ashes is a series that is talked about incessantly. It exists in our minds as a time that transcended cricket. It was pure entertainment in cinemascope.

ASHES 2005 WAS AN OCEAN’S XI OF CINEMASCOPE ENTERTAINMENT

An Ocean’s XI of talent came together for almost two months. Pietersen battled for centre stage with Andrew Flintoff and his frenemy Shane Warne. He hurtled himself in front of the audience like a maverick indie actor. On the first day of the first Test at Lord’s, the Pietermaritzburg boy played as calmly as anyone as England were put through the shredder at 21 for 5. The next morning, he cut loose and smashed Glenn McGrath back over his head. At 101-8. As Flintoff said, Pietersen “dehumanised” McGrath. He made the team believe through daring.

KP WAS GOING OFF THE BOIL

As the two sides came to The Oval, though, with the score 2-1 in England’s favour and only a draw needed, the Pietersen effect had worn off a little. After hitting 3 spanking 50s in his first knocks of the series, his influence had rather tailed off with scores of 20, 21, 0, 45, 23 and 14.

On the last day, the sun shone, and England were staring down the barrel at 67-3 and only 73 ahead. They were actually vulnerable to an Adelaide 2006 style capitulation – a scenario that eventually wrecked any competitive aura  in the horrific one-sided return series.

Vaughan had departed for a breezy 45 and Ian Bell was trapped for a pair by his nemesis Warne. Pietersen’s innings started with a hold your breath moment as a ball from McGrath whizzed past his gloves and smashed into his shoulder. He stood his ground while Ricky Ponting and the Australians danced merrily. Not out.. This was nerve-shredding stuff. He almost departed without scoring, nicking the leg-spinner, but the ball was deflected of Gilchrist’s glove to wrongfoot Matthew Hayden’s bucket-sized hands.

Three overs later, Lee threw one up to Pietersen. It was full. It was straight. Pietersen’s eyes lit up. He nicked it on the drive. It flew to Warne. There was only one result, surely. Except it spilt out.  “Are you sure?” looks must have been swapped on the field as well as off it.

Newly liberated, Pietersen hit Warney for six the very next ball over midwicket in that pick-me-up scoop kind of shot . Four balls later, he repeated the trick. He then suffered a blitzkrieg from Brett Lee, far faster than anything the Australian had chucked at KP’s boy fan Piers Morgan. One ball almost crocked the batsman’s neck and body back violently as he gloved it to safety over the cordon.

During the lunch break, Vaughan suggested attack was the best form of defence against Lee who was bowling like the fury. Four fours, two sixes and three overs later, the game had changed. The Hampshire batsman became supercharged, throwing his hands through like Conor McGregor after a bottle of Irish Whiskey. Lee’s 95mph thunderbolts were hooked with disdain and over the men placed on the boundary. This was nuts but it was the KP brand with attitude.

“BATTING LIKE A MAN WITH HIS TROUSERS ON FIRE”

As Simon Barnes noted in The Times, England’s number five was “batting like a man with his trousers on fire” when the team were still in deep jeopardy. He shouldn’t really have got away with such abandon with only Brigadier Block, Paul Collingwood left as a last recognised batsman. Collingwood did exactly that – block for 72 minutes – while Pietersen blazed. By the time Ashley Giles eeked out runs to show that Fletcher’s solid number eight theory really could work (in England, anyway) the game was up for Australia. A draw was bagged. The Ashes were won.

I saw this innings but with a social distancing gap between myself and the television. To truly have the visceral thrill of the whole experience, you needed to be at The Oval on 12 September 2005. There is no way a digital screen can project the thrust of those high velocity cannonballs from bowler and batsman.

Afterwards, Pietersen stood next to a beaming skipper and remarked that he simply wanted to enjoy batting. Such an entry into stardom didn’t need dressing up. England had their new hero, even if it did all end up in the wrong sort of tears nine years later…. 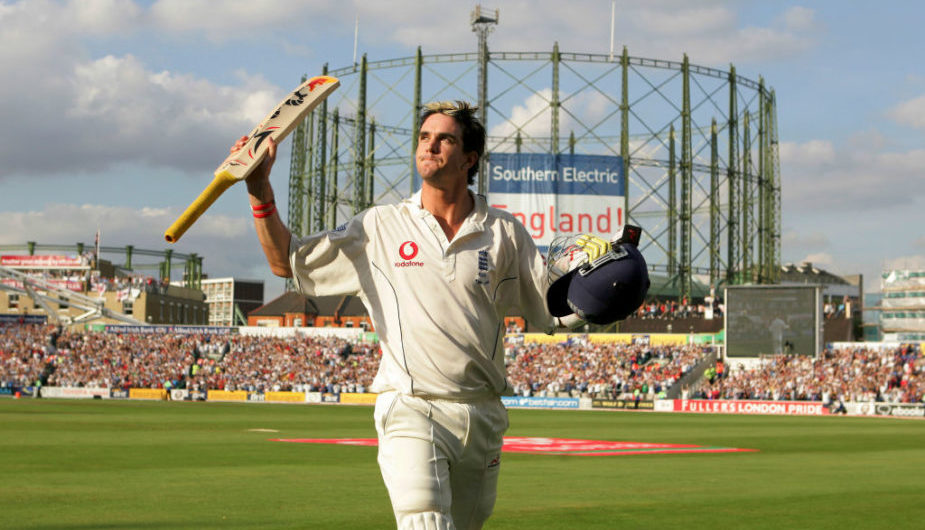