Formula 1 is back! With the old era behind us, and the new era arising, we had our first proper look at the new 2022 cars and how they behaved on track. Judging from the first day in testing, we can notice many differences in how the cars behave and how each and every team has benefited or been affected negatively by the new 2022 regulations.

The major talking point of the season so far is the aggressive Mercedes strategy with practically having no side-pods on the car. We did have some insight due to leaked sources that in the Barcelona testing Mercedes had struggled significantly, and had decided they were going with their 2019 strategy in which would see them bringing a whole new car to Bahrain.

And the biggest decision Mercedes’ introduced on their new car is to practically not have side-pods on the car. In the past couple seasons we have seen Mercedes often find something within the regulation that gives them a benefit and a lasting advantage for the season ahead. An example of this would be with the 2020 car where they had invented the DAS system which had ultimately led Hamilton to win his 7th title and the team’s 7th Constructors title.

Despite various sources saying Mercedes’ new invention would put them around 1-2 seconds quicker than the rest of the field, in the first day of testing that hasn’t really shown, with Hamilton finishing 11th and Russell finishing 9th at the end of the day. It is important to remember though that Mercedes and the drivers are professional sandbaggers and most likely aren’t showing what the car is fully capable of on track.

What Else Was Notable On Day 1?

Seeing as it is the first day of testing, what we are seeing on track may not be accurate to the cars we’ll see in the Bahrain GP seeing as teams are still developing the car and a plethora of major and minor changes will be made to each and every car.

Apart from the Ferrari show, we have also noticed many differences in how the drivers are interpreting the car. For example in the Barcelona testing and the Bahrain testing we have seen the Red Bull handle the car and steering particularly well. With Max and Sergio being smooth with their driver motions and the car responding well to it, unlike the Mercedes which appears to have some turn in difficulty with certain corners on the track.

Specifically, In Turns 10 and 11 we’ve seen a couple cars locking up and going off the track, it appears to be teams could be struggling with turn in issues and the front tyres just not being able to bite in to the track. In addition to this, in the morning we saw double front lock-ups from the Aston Martin and Ferrari going into Turn 1 as well as the Williams of Alex Albon running wide, showing It looks to be the teams could also be struggling with getting the car to slow down while going at high speeds on the straights.

If you haven’t been hiding under a rock, you will also know that in Formula 1 everyone now uses the term porpoising. Porpoising is where the car bounces up and down and the driver is severely impacted by that motion. Most drivers have claimed to feel sick or unwell by the motion of the car, as well as body pain being reported by a couple other drivers as well. Since the Barcelona testing, teams have significantly improved with this issue and it is now less of a problem. However, teams are still affected by it and will be hoping to reduce it over the coming days before lights out for the Bahrain Grand Prix. The teams affected by it the most are AlphaTauri and Mercedes with the Mercedes heavily porpoising and being claimed “the car is uncomfortable to drive”.

As well as the porpoising playing a significant part into the cars design, one of the major things teams have turned their attention to is the floor. Multiple teams have made their own personal designs and have tried out many different patterns when it comes to the floor. But what has been catching peoples eyes is how low the teams are making their floors.

Specifically, the floor of the Williams and the Ferrari through Turn 12 on the circuit were scrapping the tarmac which potentially could cause drama and be a safety concern when it comes to racing. As well as the floor potentially being damaged, we have seen the major performance difference while not having pieces of the floor and it will certainly be race costing. Max Verstappen in the past season in Hungary had to race with “half a car” after an incident on Lap 1 which saw him have significant damage on the floor and end up finishing only in P9.

So potentially in the future we may see the FIA making a new rule in which the floor will have to be a certain amount of distance from the ground in order to prevent a future accident. So we’ll have to wait and see if they implement anything in the foreseeable future.

That’s it for Day 1 testing, over the next few days teams will adapt the car more and figure out what they need to do in order to improve over their rivals, many teams will have new parts arriving in the next 2 days including Red Bull, so we’ll be interested to see in what effect they’ll potentially have. 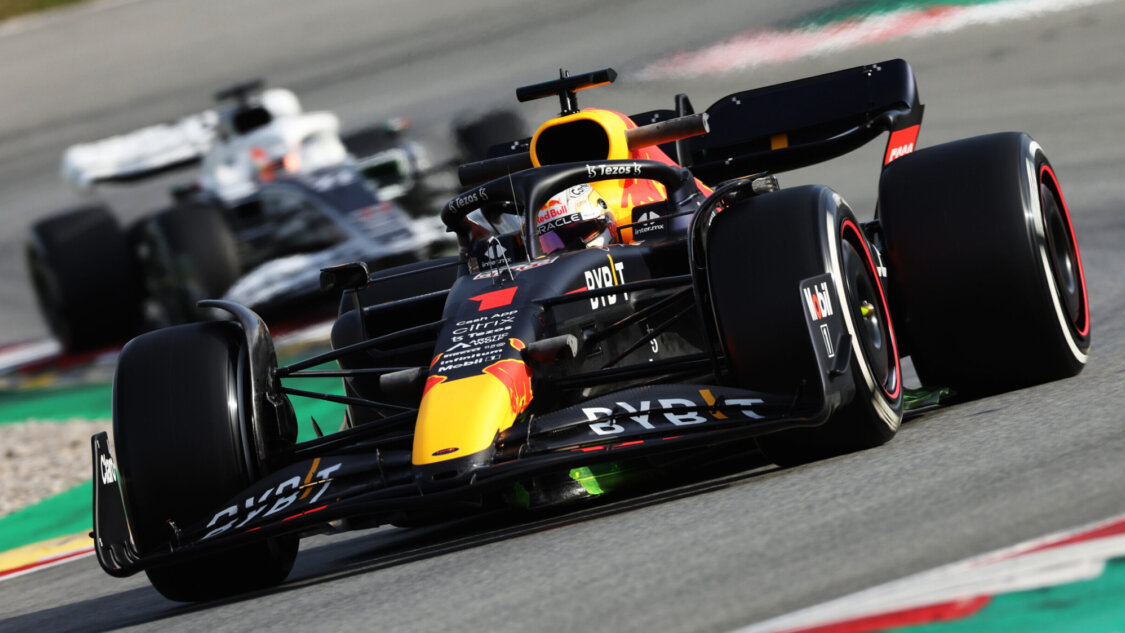