The longest format of the game is the, most prominent and the most prestigious format there is. Since this format doesn’t have multi-lateral tournaments, and only bi-lateral ones, the biggest achievement in this format is to be on Top of the ICC Test Ranking Points Table.

The International Cricket Council awards a trophy, the ICC Test Championship mace, to the team holding the highest rating. The mace is transferred whenever a new team moves to the top of the rating list.

Fans of the top team take pride in their team being top and enjoy their reign as the best Test Side in the World. However the issue with the Ranking System is that no one really understands how it works.

In this article I aim to break down the ICC Test Ranking System so that every fan can not only understand it, but even work out for himself how the results of an ongoing series would affect the Table when it is updated to incorporate the series result.

A series finished 2-1, how would it have affected the table had it finished 3-0 instead, or 1-1? Or by what margin does your favorite team need to win the next series to move up a place on the ICC Ranking Table?

These questions have been hard for the cricket fans to answer so far, but hopefully this article can put that to an end. 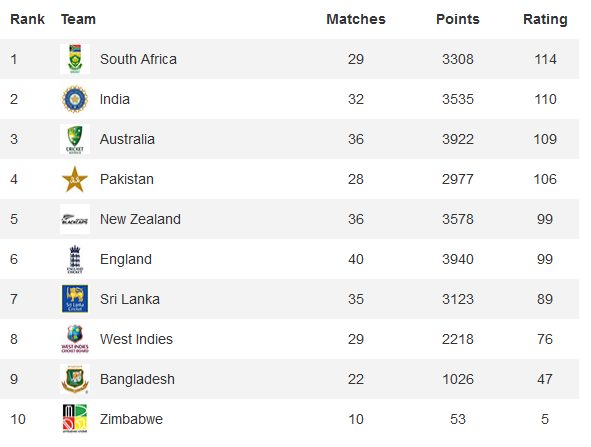 The present ICC Ranking Table looks like this. To begin understanding this table, one first needs to understand the meaning of three Columns found on the table –

2) Points or Rating Points (they are often used interchangeably)

3) Rating
Rating Points (or Points) and Rating are not to be confused with one another. Points or Rating Points, are the sum total of Points earned by winning Test Matches or Series. Rating is arrived at by dividing the total Points a team has, by the total number of Matches it has played.

For the purpose of the ICC Table, the team with higher Rating is ranked higher.

Now lets get to the ICC table. The first thing to understand is the concept of ‘Matches’ on the ICC Table.

Right now the Table covers matches played upto 4 previous years (seasons) upto May. What does this mean? Simply put, that if you (say) looked at the Table right now, it consists of games played in the present season, and the three previous seasons.

That is to say the table right now (Jan 2016) the table takes into account all games played during the period Apr, 2012 to Jan, 2016 (May 2012-Apr 2013, May 2013-Apr 2014, May 2014-Apr 2015, May 2015-Jan 2016). Every year the start of May is seen as a season transition, and an Update takes place. During this update all matches played during the oldest season are removed from being taken into account. Therefore every year in May the Table will change after this Update, despite no new matches having taken place.

Naturally if a team had a poor run during the period that is no longer considered for the Table, it will benefit from the Update. While this may seem unfair, but there are enough checks in place, to ensure that an update in May doesn’t overwhelmingly affect things, and more weightage is given to the two most recent seasons. I will explain how this is done later in the article.

Now that ‘Matches’ have been explained, lets move on to the concept of ‘Points’.

ICC considers all test series with two tests or more as eligible for consideration. ICC awards Series Points to both sides playing the series as follows –

1) 1 point to the winning team for every test win

2) 0.5 points to both teams for every test draw

3) 1 point extra to the team winning the series

Now lets put this into practice. Lets take the Aus vs WI series presently going on. Now, let us assume that Australia wins this series 3-0. So number of Series Points Australia would get –

The no. of Series Points WI would get = 0 (No tests won or drawn, and series lost).

Method 1) If the gap between the ratings of the two teams at the commencement of the series is less than 40 points, then the ratings points for each team equals –

Method 2A) If the gap between the ratings of the two teams at the commencement of the series is more than or equal to 40 points, then the ratings points for the stronger team equals:

Method 2B) If the gap between the ratings of the two teams at the commencement of the series is more than or equal to 40 points, then the ratings points for the weaker team equals:

This seems complicated, but its not. Let us continue with the hypothetical example of the Aus vs WI series, which Australia win 3-0. The first thing we need to see is whether the difference between the two team’s Rating is more than 40 or less than (or equal to) 40.

This is all that needs to be understood here. Now since both teams are within 40 points of each other, let us Use Method 1 to convert Australia’s Series Points into Rating Points.

Now let’s remember, Australia’s Rating before the series was 109, while WI’s was 76. (A simple look at the ICC Test Table will give us this info).

So what will Australia’s new rating be –

Putting these numbers in the formula we get –

Thus, if the series finishes 3-0 in favor of Australia, Australia will earn 504 Rating Points from this series.

Now how will this affect the Table –

So the updated Matches for Australia = 36+4 (One more than the actual matches played) = 40.

Thus when the table is updated by the ICC after the series completes, If Australia win 3-0, Australia will jump two rating points to 111, and move ahead of India into second on the points table, who have a Rating of 110.

Let’s see how losing 3-0 will affect the WI Rating. Again since the Rating difference for both teams was less than 40, we will use Method A. WI new rating if they lose the series 3-0 to Australia –

Putting these numbers in the formula we get –

So WI will have earned 236 Points from the Series. So let’s Update WI stats (assuming they lose 3-0)

I believe this makes the ICC Table much simpler and clearer for everyone. You can now input data and see for yourself how a series ending by a particular scoreline will affect the ICC table.

There is just one last thing I need to explain. That is with regard to the concept of Matches. As I said earlier, the matches from the Present and 3 Previous seasons are taking into account for the table. This is just half the picture. though.

Lets get to the other half – Matches played and points earned in the two earliest years are cut by half.

However that is not done. To ensure that recent performance have more weightage in the rankings, only half the Matches and Points from Period B, are considered.

So in this the Teams Rating will be determined as –

So the for this team, the Table will look like

However this is only to give you a complete understanding of the ICC Table and now you have it.

In updating the table with results from ongoing or just finished series’, one doesn’t have to worry about Period A, and Period B, and half Period B or any of it. All this is already done on the ICC Table, one merely has to take it forward from there on, and simply update the recent series results on the table, to get new Ratings.

The method to do so has been explained earlier, and just use the three formulas (Method 1, or Method 2A or 2B) given, depending on whether the difference between the teams involved is more than 40 Rating or not.

Hopefully to those who have read the article the ICC Test Rankings will no longer be a mystery from now on. 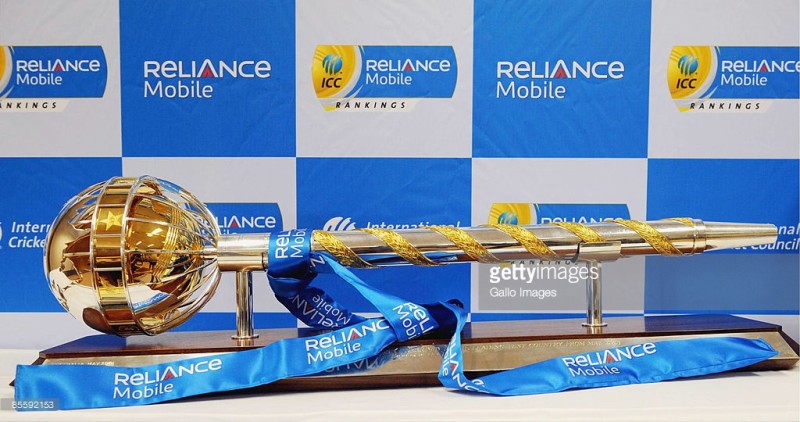