Caroline Wozniacki, the Danish superstar from Odense, announced herself on the professional scene in 2005, just two years after her junior career started. Her first Women’s Tennis Association (WTA) tour event was the Western and Southern Financial Group Women’s Open in Cincinnati where she lost in the first round to the then top seed Patty Schnyder. Caroline then spent a few years playing on the WTA, working on her game in both singles and doubles events before she eventually made her mark and got her hands on her first trophy.

In 2008, after early round losses in three of the Grand Slams, twice to Ana Ivanovic, Wozniacki arrived in Sweden for the Nordic Light Open. It was here that she was able to navigate the entire event without dropping a single set, and capture her first WTA title and truly stamp her authority on the world of tennis. A confident, superbly gifted young Dane, at just eighteen years old, had secured a professional tennis title, and that was just the beginning.

In 2009, after winning a further five WTA Tour events (making six in total), Wozniacki fought her way to her first Grand Slam final in the US Open at Flushing Meadows, New York City. In doing so she became the first Danish woman to ever reach a Grand Slam final, where she would face fellow European and Belgian ace, Kim Clijsters. On this occasion Caroline was unable to win the title as Clijsters accrued one of her six Grand Slam titles. After this career high point she suffered numerous injuries and illnesses which forced her to retire from several events, closing out the year and not reaching another final.

On Top of the World

The next two seasons were superbly impressive for the Danish superstar. Throughout 2010-11 she made her way to sixteen WTA tour finals, winning twelve of them. This stunning run of form launched her up the rankings, culminating in the world number one spot at the end of both years.

From there things started to become more difficult for Wozniacki in regards consistent form, but as her loyal fans knew, she was a fighter. Caroline had gained the never say die reputation and it was this positive attitude that would lead to many more smiles.

In 2014, at Flushing Meadows once more, the former US Open runner up made her second Grand Slam final. This crown also slipped away in a straight sets defeat to one of the greatest female tennis players to step onto the court, Serena Williams.

After a handful of final appearances throughout the next few years, yet more injuries plagued the Dane, where she found her ranking slipping through no-shows. However in September 2017 her comeback began in Japan. Making her third final in four years in the Pan Pacific Open in Tokyo she beat Anastasia Pavlyuchenkova in straight sets she picked up her first tour title for almost a year.

A month later in Singapore she made the final of the WTA Tour Finals for the first time since her loss to Clijsters in 2010. This time she faced veteran Venus Williams and defeated her in straight sets.

Then, in January 2018, back in the Australian Open, Caroline Wozniacki, seeded second, found herself 1-5 down and facing two match points against Croatian, Jana Fett. Saving those points she was able to overcome her opponent and entered the third round. Beating Kiki Bertens and Magdaléna Rybáriková in rounds three and four set up a quarter final against Spaniard Carla Suárez Navarro. Three sets later it was the Belgian Elise Mertens who stood in her way, who she brushed aside in straight sets to reach her third Grand Slam final where she would face world number one, Romanian, Simona Halep. The first set went to the Dane in a tie break before Halep leveled the match in the second. The third set may have been Wozniacki’s greatest single set performance as she claimed her maiden Grand Slam title at the age of 27. She also found herself back on top of the world rankings after a six year absence from that position.

Since then her injuries have come back to haunt her and she struggled to gain any consistency on the court, and so with a clearly heavy heart, in December 2019 she announced that the Australian Open would be her last as a professional tennis player.

At the 2020 Australian Open Grand Slam, after a third round defeat to Tunisian world number 78 Ons Jabeur, Caroline officially retired from professional tennis after a glorious fifteen year career. Fans sung sweet Caroline as she performed a tearful lap of honour and glanced back at her career with fondness. Winning thirty career singles titles and two doubles titles, her infectious smile will be sorely missed by her millions of fans across the globe. 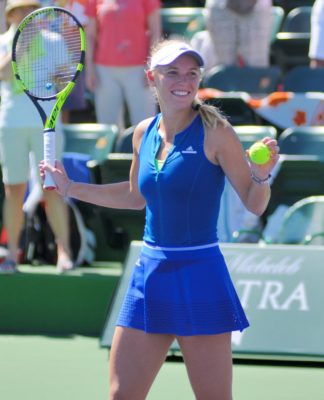