The Portland Trailblazers have had a proud history over the past 44 years. They came into the league in 1970 and were NBA champions seven years later in 1977. Starting in the 1981, the franchise made 21 consecutive playoff appearances. They appeared in the NBA Finals two times during that time span (1990 & 1992). Many people around the league considered the Portland fans some of the most supportive throughout their history. Through thick and thin, they would fill up the Memorial Coliseum and later the Rose Garden.

In 2003, the tables turned and it all came crashing down. Former General Manager Bob Whitsitt decided to play fantasy basketball owner and threw out the need for team chemistry or player character. He built a team around players such as Bonzi Wells, Shawn Kemp, Qyntel Woods and Ruben Patterson. All of them had made questionable decisions throughout their careers. Rasheed Wallace and Damon Stoudemire smoking Oregon herb didn’t help the matter either. The team was dubbed the Jail Blazers and made headlines regularly for all the wrong reasons. This coincided with the team play on the court regressing and they managed to do the unthinkable… they got the Portland fans to quit supporting them.

By the time 2006 rolled around, things were looking bleak in the Rose City. The Blazers hit a franchise-low 21-61 mark in the standings, making them the worst team in the league. Paul Allen was rumored to be shopping the franchise and the arena was owned by a team of investors after a bankruptcy. Trailblazer fans, so used to success, were being tortured.

June 26, 2008 may have been the biggest day in the history of the Portland franchise. It’s hard to say it tops winning the championship in 1977 but if it were not for the NBA draft that night, the team may be in Oklahoma City. Kevin Pritchard, General Manager at the time, wheeled and dealed and took away the draft’s two best players. LaMarcus Aldridge and Brandon Roy became the saviours of the team.

LaMarcus Aldridge took a little longer to develop and his time would come a few years down the road but Brandon Roy took on the mantle of team leader from Day One. Resident bone head and leading scorer Zach Randolph was still on the roster at the time but once coach Nate McMillan seen what he had in Roy, Randolph became expendable. He was later traded to New York during the 2007 draft. Roy had a great rookie season during which he averaged 16.8 PPG, 4.4 RPG and 4.0 APG. He was a near unanimous Rookie of the Year pick, falling one vote short (127 out of 128 first place votes). The team still missed the playoffs at 32-50 but it was an 11 game improvement and it gave Blazer fans some much-needed hope.

Portland’s expectations rose quite a bit in 2007 when the Blazers landed number one overall pick Greg Oden. Sadly, Oden was soon out of the picture (he sustained a season ending knee injury before playing a game) and the team was back on Brandon’s shoulders again. The Trailblazers finally came together in December of that year with a 13 game winning streak and the team finished with a 41-41 record. Brandon Roy made his first All-Star team in only his second season, the Blazers first All-Star since Rasheed Wallace in 2001. Roy finished the season with averages of 19.1 PPG, 5.8 APG and 4.7 RPG.

After being named Rookie of the Year in 2007, Brandon Roy was selected as an All-Star in 2008.

By 2008, the Blazers were a playoff team again. They finished with a 54-28 record behind the great play of “The Natural”. He made a second All-Star game behind a 22.6 PPG scoring average and he finished ninth in the Most Valuable Player vote. He was also named to the All-NBA Second Team, essentially making him a top 10 player that season. The Blazers lost in six game to the Houston Rockets but the fans were completely behind the team again. The days of the Jail Blazers were over.

Brandon Roy was one of the most important players in franchise history. That’s a list that includes greats such as Bill Walton, Clyde Drexler, Terry Porter and Rasheed Wallace. He actually saved a franchise from possibly relocating and rejuvenated a fan base. The category where Brandon falls short is games played. He was diagnosed with a degenerative knee disorder in 2011. He had to retire after five years in the NBA.

Offensively, Brandon Roy was the complete package. He was a knock-down shooter and could blow right past guards on the next play. He had a great basketball I.Q. and always knew where the open man was. He could battle in the post as well as lead a fast break. He had it all and he made it look easy. This is why Brian Wheeler, Portland’s radio play-by-play man, called him “The Natural”. Ron Artest, one of the great on ball defenders over the past 20 years, claimed that Roy was the best player he had to ever defend. He also had something that only a few players are blessed with… the “clutch gene”. In the final seconds of the game, he was The Man. He had at least seven game winning shots throughout his five years in Portland.

During his final season in Portland, Roy’s stats declined due to injuries. His scoring average dropped to 12.2 PPG and LaMarcus Aldridge became the go-to guy. Brandon wasn’t done though. During the 2011 playoffs, the Blazers faced the Dallas Mavericks. Down 67-44 in the third quarter, Roy scored 18 points in the fourth quarter to bring the Blazers back. They ended up winning by two points on a Roy game winner. He finished with 24 points.

Brandon Roy left Portland in style. He almost single-handily beat the Mavericks in Game 4 of the 2011 NBA Playoffs. Roy scored 18 of 24 points in the fourth quarter.

That was his last hurrah and he announced his retirement a few months later. He attempted a comeback with the Minnesota Timberwolves in 2012 but he lasted only five games before his knees gave in.

Brandon Roy is one of the greatest Portland Trailblazers ever and he will go down in franchise history as one of the most dependable and influential players in their history. He finished his career with three All-Star appearances, three NBA Playoff appearances and career averages of 18.8 PPG, 4.7 APG and 4.3 RPG. They don’t keep track of the 1,000 memories he gave the fans. I will always have a soft spot for “The Natural” and I would have no problem with his number 7 being hoisted to the rafters considering he did more in five years than a lot of players do in ten. As a Blazer fan, all I have to say is… Thank You, Brandon Roy. 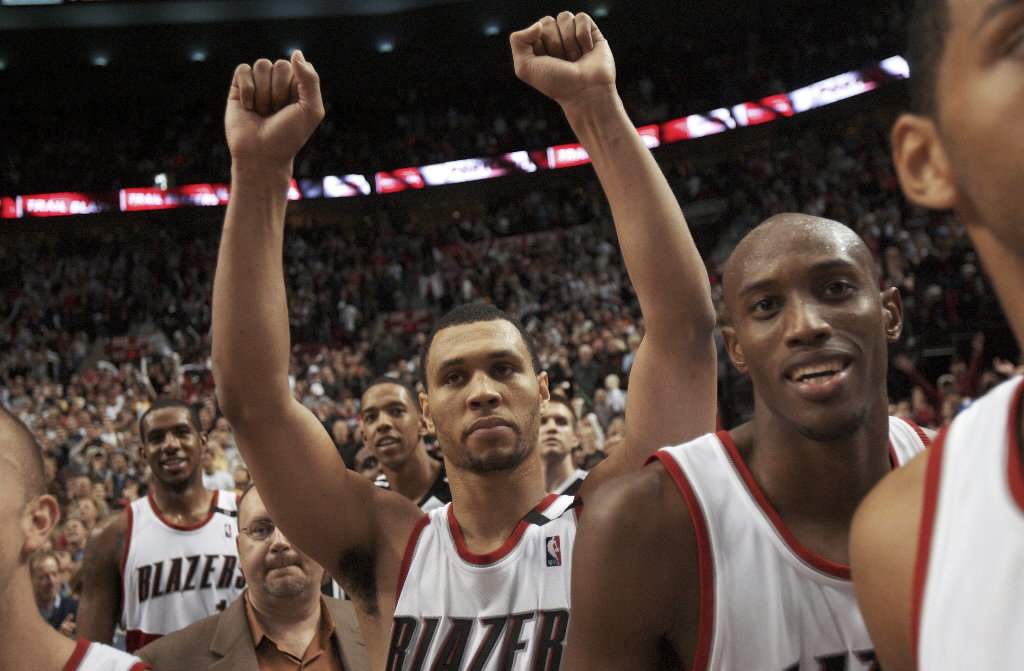