The news broke earlier in the week about Phillip Rivers the quarterback for the now Los Angeles Chargers had packed up and moved his family to Florida. Now as a Chargers fan should you panic? Personally I think the answer is no. Let’s be honest, new year, newish city, new quarterback might do the Chargers some good. Rivers is still a good quarterback and he was commuting from San Diego so this doesn’t mean he’s done playing for the Chargers. Although I find it highly unlikely that he’ll commute from Florida. The point being is if he’s no longer in your city he’s probably not gonna be with the team for the 2020 season. This line of thinking doesn’t include Tom Brady, he’s for sure gonna be in a Patriots jersey next year. I’ll give you a minute to mourn the departure of your long time quarterback….. And enough of that let’s talk draft. Draft season is my favorite season. As a long time fan of a losing Franchise I always looked forward to the draft. Mostly it brought me hope, but more importantly it prolonged football for just a couple more months. Two prospects that I think Chargers fans should be excited about is Justin Herbert and Tua Tagovailoa. Tua has been linked to the Miami Dolphins for so long it feels like he’s already on the team. Here’s what I find interesting about the Dolphins 1st round pick. Fitz Magic is returning or rather staying in south beach next year. They hired Chan Gailey to become the OC and Fitz knows that offense so well he really should be coaching it. So that tells me the Dolphins can be super patient with the 5th overall pick, say draft a lineman after sending the best young left tackle in the League to Houston. Before you draft a franchise Quarterback you have to make sure he will be protected. With Tua coming off a season ending injury with Alabama, you want to make sure you’re not throwing him to the Wolves of the AFC East. I personally think Miami goes lineman with number 5 the injury to Tua will scare them off a bit and with the draft capital they have they can easily trade back up and grab him if they need to (hint: I don’t think they’ll need to). Now you’re probably wondering where this leaves us with the Chargers fiasco. It’s pretty easy, the Chargers pick 6th overall in the 2020 NFL Draft. Guess who’s sitting there pretty? More than likely with a big chip on his shoulder because he was told this whole year that the Dolphins were gonna take him. You’re on fire today if you guessed Tua Tagovailoa. I think the Chargers have a pretty good shot of drafting him, they have a more rounded team then the Dolphins do and he can easily sit behind Tyrod Taylor if need be for the first year. That’s the dream scenario, Rivers moves to Florida and the Los Angeles Chargers grab his replacement with the 6th overall draft.  Chin up Chargers fans, things could certainly be worse right? It’s Draft season, the most magical time of the year. Time to get your hopes up and dream of a perfect Draft. 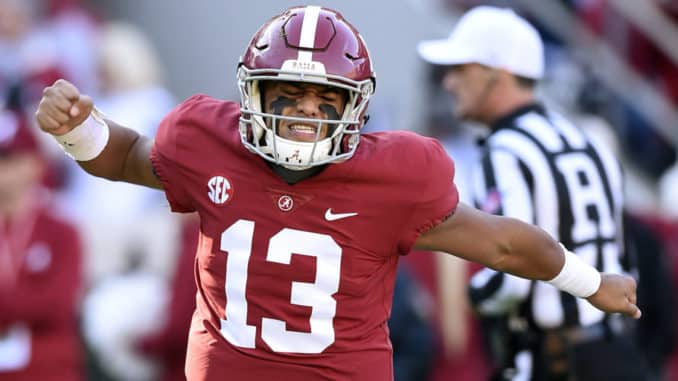