After swiftly finishing England’s first innings, the top-order for India staged a fightback on Day three at Headingley.

With the score 423-8 and trailing by a mammoth 345 on the first innings, Kohli and India were up against it on the third day’s play. Ollie Robinson and Craig Overton were the overnight batsmen for England.

The duo added a further eight runs before Shami trapped Overton in front for 32. It was the perfect start for India who was looking to wrap up England’s first innings and get batting.

Jasprit Brumrah wrapped up the innings with his second ball of the day. Ollie Robinson who attempted a wild slog was castled by India’s gun bowler for a 14-ball duck.

A Solid Start By India’s Openers

To have any chance of staying in the contest, the Indian batsmen needed to show character against an England attack who were relentless with their bowling in the first innings. Both Kl Rahul and Rohit Sharma showed great discipline against the new ball.

The opening pair almost batted out the morning session, however on the penultimate ball of the session, Overton enticed KL Rahul into poking one outside his off stump, Johnny Bairstow taking a one-handed stunner at second slip.

Pujara and Rohit Steady the Ship

When Pujara joined the Mumbai star in the middle after lunch with the score 34-1, both of them knew they had to calm things down in the middle. This was another important innings for the rock of India. The duo batted through the entire afternoon session scoring 78 runs. Rohit looking solid as ever, Pujara looking busy.

This is the first time in the series that India’s number three has looked his best. At times in the first two Tests and in the first innings, he has looked a little static in the middle, but today he was much more willing to put England’s bowlers under pressure by looking to score runs.

Rohit survived a couple of LBW shouts on his way to fifty. Joe Root gave him a life on 39 by eventually running out of time to go for a referral. The replay showed that the ball was crashing into the middle-stump. The Mumbai batsman took advantage by moving his way to fifty, Pujara looking solid as ever at the other end.

The duo batted through the entire afternoon session with India on 112-1 at Tea.

With Pujara and Rohit steadying things in the middle, Captain Root was busy figuring out where the next wicket might come from. He then turned to the man who was filling Stuart Broad’s shoes. Rohit, who was struck in front was dismissed by Ollie Robinson shortly after Tea.

He reviewed, but his luck ran out as DRS proved that umpire Richard Kettleborough was correct and so he walked back to the pavilion for a hard-fought 59

Unlike 2018, it has not been a good start for captain Kohli. 0, 42, 20, and 7 are his scores so far in this series. But today he looked in complete control. What was so impressive today was his decisiveness outside his off-stump.

So far this series, it looked as if he was back to the Kohli of 2014 where he was unsure about where his off-stump was and kept on nicking off to the keeper, but today he was back to 2018 Kohli where he was leaving those balls alone and making the bowlers bowl to him.

With him reaching 45 and Pujara Reaching 91 not out, the Indian dressing room will be hoping they can make it into a big one and drag them back into the contest.

So, Day Three ends with England still in the box seat with a 139 lead, can they push for victory on day four, or can Kohli and co fightback and stay in this contest?

Tune in to Sky Sports Cricket on BBC Test Match Special at 10:30 am tomorrow to find out. 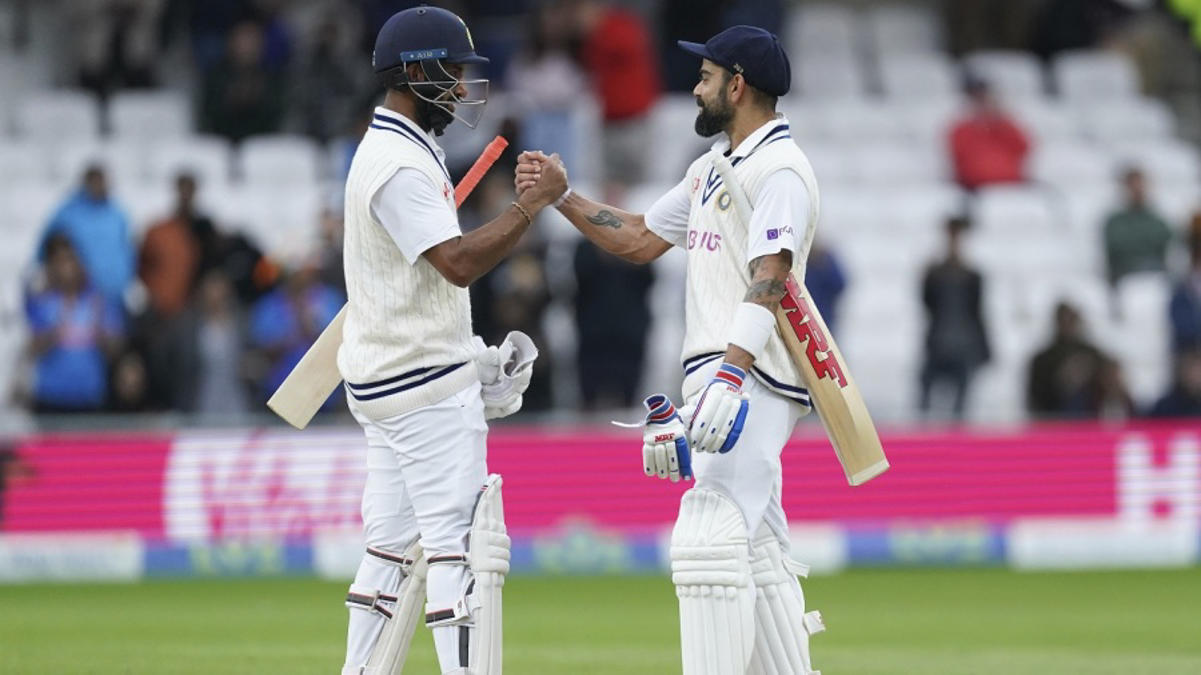