Following an analysis of mountain stage contenders, let’s get to the predictions.

There will be six mountain stages at the 2021 Tour de France – three have a summit finish.

Starting in Oyonnax and finishing at Le Grand-Bornand, this stage sees five climbs take in three categories one climbs, which all come in the last 53 kilometres of the race.

The last three climbs amount to 22 kilometres of climbing at an average of about 8.5%, with very little time to take a breather.

There will be two main contenders for this one, defending champion Pogacar and world champion Alaphilippe, who won at the summit of Le Grand-Bornand in 2018.

Although Pogacar has previously enjoyed mountain stages with passages of 8%+, it will Alaphilippe’s experience from his wins in the Ardennes’ classics and his win on these roads three years ago, who will use this to his advantage the most, as the yellow jersey contenders keep a close eye on one another.

Both of these riders have shown that they can win a mountain stage that finishes with a descent – it will be too early, however for the Slovenian to show how strong he is, and instead, it will be Alaphilippe who will want to have the yellow jersey after this stage.

This is the first stage that finishes at a ‘reasonable’ altitude, 2107 metres via the Montee de Tignes (21 kilometres at 5.6%).

It was, of course, part of the 2019 edition as well, but due to a hailstorm followed by a mudslide – the stage was cut short, and Alaphilippe lost the yellow jersey to Bernal when the jury decided to take the times of riders when they reached the summit of the Iseran pass.

The stage from Cluses to Tignes has five climbs: two category two climbs, two category one climbs, and one Hors Categorie, which finds itself as the third of five climbs.

Although the stage finishes at 2107 metres, it is not a mountain top finish in the strictest sense, as the last two-odd kilometres are flat.

At almost 145 kilometres long, and the last stage before the first rest day, this will be a stage for an outright yellow jersey contender and the pure climbers.

It is a tough stage where 35% of the distance covered will be on ascents; Tignes is also where former yellow jersey wearer Michael Rasmussen won in the 2007 Tour de France.

Thomas’ INEOS team-mate, Carapaz, will throw his hat into the ring as a potential Tour-winning candidate, and take this one, as the standings in the mountain classification will change significantly by the end of this stage.

After a rest day and a day for sprinters, it’s time for the best climbers to show themselves again.

Starting in Sorgues and finishing almost 200 kilometres later in Malaucene, this stage takes in five climbs: it starts with two fourth category climbs within the first 44 kilometres and then starts to hot up at the 72-kilometre mark as riders take on Col de la Liguiere (9.3 kilometres at 6.7%).

No differences will be made amongst the best climbers and general classification riders here, instead, they will then take on the Mont Ventoux twice.

The first ascent will be a 22-kilometre slog at 5.1% followed by about 30 kilometres of recuperation before they have to climb the other side of the Ventoux, which is shorter (15.7 kilometres), but its steepness increases to 8.8%.

The first ascent of the Ventoux will not be a deciding factor on the stage – the second one will, however.

Watch as Roglic uses his descending skills to gets away from his main rivals and uses the 20-kilometre descent into Malaucene to win.

After a bumpy day (five three- and two- category climbs) that finishes in Quillan, riders get ready for a 188-kilometre stage that sees them reach the highest point of this year’s Tour atop Port d’Envalira at 2408 metres.

Today’s stage is the fourth of six mountain stages and the first in the Pyrenees – it starts with two small hills in the opening 18 kilometres.

Riders will then tackle three category one climbs and one category two climb – with the most interesting of them being the last two (Port d’Envalira and Col de Beixalis).

While the first one of them sees the Tour go over 2000 metres for the second time, it is the second one at ‘only’ 6.4 kilometres, but with a gradient of 8.5% that could make the difference, especially as a 10+ kilometre descent follows.

Alaphilippe will win his second mountain stage of the Tour de France in Andorra and then take a well-deserved rest day.

The second header of two-day mountain stages starts here (Muret) and heads to Saint-Lary-Soulan where the riders will finish on the Col du Porter.

The climb is 16 kilometres long with a gradient of 8.7%, ending on the summit at 2215 metres – the highest summit finish this year.

The stage takes in three climbs – two categories one climbs that take in Col de Peyresourde and Col de Val Louron-Azet and then the Hors Categorie of the Col du Portet.

However, the stage won’t encounter the Col de Peyresourde until the 116th kilometre, meaning that 36.6 kilometres of climbing come in the last 60-odd kilometres of the race.

It’s also Bastille Day, so the French riders will be doubly motivated to win today – the last French winner on July 14th was Barguil in 2017, winning in Foix, by beating Nairo Quintana and Contador in a sprint.

However, this stage has Pogacar’s name written all over it – just over 20% of the stage requires the riders to climb – almost an exact replica, in terms of numbers, that Pogacar won last year (stage 15: Lyon to Grand Colombier).

That stage also had three climbs, where the category one climbs came 75 kilometres from the finish and finished with a Hors Categorie climb of 17.4 kilometres at 7.1%.

With hurt in the legs from the previous stage, the peloton will go above 2000 metres for the second time in two days.

This will be one for the good climbers to win a stage and those going for yellow will be keeping an eye on each other.

Once the riders have crested the Col du Tourmalet, they have about a 20-kilometre descent before they tackle the 13.3-kilometre climb and finish on top of Luz Ardiden at 1715 metres.

With an individual time trial still to come two days later, whoever is in yellow may want to pick up a few extra seconds before going into that, but the winner will not be a general classification rider, although he may squeeze himself into the top 10 by doing so.

Colombian riders have tended to target mountain stages near the end of the Tour – and this edition will be no different.

As a stage winner last year, Miguel Angel Lopez will strike again; although this stage is about 40 kilometres shorter than last year’s stage finishing on Col de la Loze, the amount of climbing required (35 kilometres) suits the Colombian all too well. 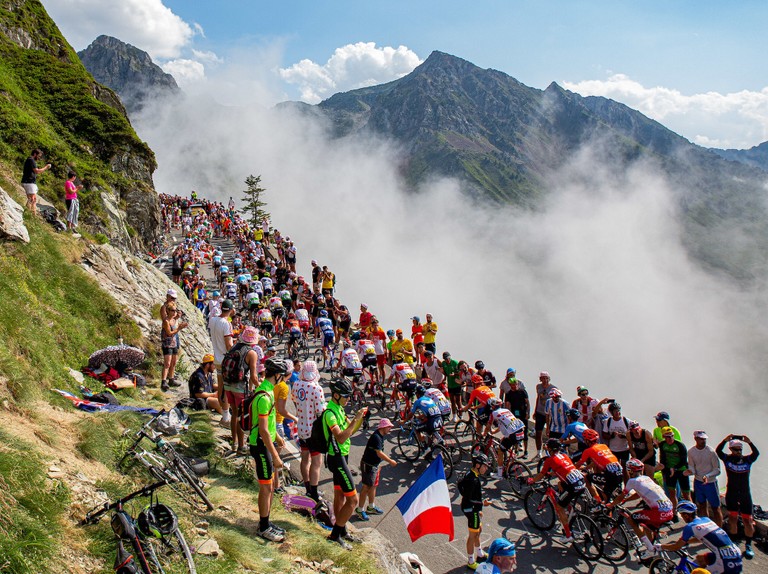