He was also the first rider since Laurent Fignon to win the Tour de France at his first attempt.

On top of being the first Slovenian to win the Tour, he was also the first rider since Eddy Merckx in 1969 to win three jerseys (yellow jersey, polka dot jersey and white jersey (Young Rider Classification)) in the same Tour.

Last year’s edition of La Grande Boucle also didn’t have a French rider finish in the top 10 – this has not happened since 2013.

It was also a Tour where Egan Bernal slipped away slowly but surely, pointing to ailments with his lower back; he won the Giro this year, but will not be partaking in the Tour.

Team INEOS (and formerly as Team Sky) has won seven editions of the Tour de France with four riders (Bard Wiggins (1), Chris Froome (4), Geraint Thomas (1) and Bernal (1)) and will be going into this Tour with a plethora of Grand Tour-experienced riders.

Dave Brailsford’s men count Thomas, Tao Geoghegan Hart, Richie Porte and Richard Carapaz, with the latter two showing why they should be in the team winning the overall classifications in the Dauphine Libere and the Tour of Switzerland, respectively.

So what does all this information mean for the upcoming Tour de France that starts on June 26th?

The one rider everyone will be looking forward to watching in his first Tour de France is Mathieu van der Poel (26).

He was the winner of the Tour of Flanders last year, second in that same race this year, winner of Strade Bianche in 2021, and some sensational efforts in both Belgium (Kuurne-Brussel-Kuurne and E3 Harelbeke), two-stage wins in Tirreno-Adriatico and another two stages in the Tour of Switzerland.

He noted on Sunday, six days before the start of the Tour in Brest, that he simply had ‘an off day as he climbed off his bike and failed to finish the Dutch Road Race Championships.

However, he recently said in an interview that one of his goals this year is to wear the yellow jersey, something his maternal grandfather Raymond Poulidor wasn’t able to achieve during his career.

And when the younger of the van der Poel brothers sets a goal, it’s hard to stop him.

His main adversary both in the field and the road of late, Wout van Aert, became Belgian road race champion for the first time, and that after surgery to remove his appendix and losing one of his closest friends to cancer.

Throw into the mix Julian Alaphilippe, who will be the first Frenchman to wear the rainbow jersey donned by the World Champion at the Tour de France since Laurent Brochard in 1998.

Winner of seven polka dot jerseys, a record, Frenchman Richard Virenque was once quoted as saying:

“You can say that climbers suffer the same as the other riders, but they suffer in a different way. You feel the pain, but you’re glad to be there.”

And those who can climb are happy to be there because being able to climb puts you closer to winning – winning a stage, a jersey, or the entire event.

Another interesting trend to note is that as these average distance decrease, the age of that year’s Tour de France winner has increased year by year, up until 2018, when Geraint Thomas won at the age of 31.

As the average distance has decreased over the years, the average age of mountain stage winners has increased again since 2017.

Looking at the last three editions of La Grande Boucle, there have been 21 stages that covered terrain described and/or categorised as mountain stages or medium mountain stages (including one mountain time trial).

Five of those stages have been won by French riders, four by British riders, another four by Colombian riders, and Pogacar picked up three of Slovenia’s four mountain stage results in the last three years.

However, what is it about the nationality of the riders, age of those riders, the weight of those riders and the way the stage is set up that helps indicate their achievements, especially with the upcoming Tour de France?

Stage 17 also finishes on the summit, at Col du Portet, a 16-kilometre climb averaging 8.7% at an altitude of 2215 metres, a climb which was visited as recently as 2018 – won by Nairo Quintana.

Colombian riders have had successes in the Tour de France the 1980s (six stage wins), only two in the 1990s, five in the 2000s and in the last decade, nine in total, as well as the country’s first Tour de France winner in 2019.

In the last three years, there have been four stages going to Colombian riders, two of which were for Quintana (stage wins in 2018 and 2019). Last year saw Education First’s Daniel Martinez and then Astana’s Miguel Angel Lopez (now with Movistar) win stages 13 and 17, respectively.

What do these three riders have in common? They all came to the Tour riding in at less than 60 kilograms – 59 to be exact. Three of those four wins were also on mountain tops.

What is of interest as well is that three of the four stage wins came in the last week of the Tour.

While the actual distance of the stage matters little (between 65 kilometres and 208 kilometres), when it comes to the amount of distance that is tackled in terms of actual climbs, no country has done better in the last three years than Colombian riders when the amount of climbing has been between 38 and 46.5 kilometres, or between 21% and 23% of the stage.

The current world champion, Alaphilippe, has won three of France’s five mountain stages – none of which finished atop a mountain.

In addition, he won two of those stages the day after a rest day, both of which occurred in 2018, the year he won the polka dot jersey.

At 62 kilograms, Alaphilippe won one stage in each week of the Tour – showing that he likes to target specific stages.

He would also be one of the riders to look out for on the hilly stages, whether it stages one or two, the longest stage at this year’s tour, stage seven, or stage 16.

Earlier this year, he won Fleche Wallonne for the third time in four years – a 193-kilometre race which included 12 climbs, and about 3000 metres of climbing, where riders tackled Mur de Huy three times.

In addition to the hilly stages mentioned earlier, Alaphilippe could be targeting a stage 15 win, which doesn’t finish on the summit of Col de Beixalis, and instead finishes in Andorre-la-Vieille.

French riders have always wanted to do well on their own mountain passes. They have won the Mountain Classification of the Tour de France on 23 occasions – a record seven have been won by Richard Virenque.

In the last three years at the Tour de France, two British riders have won two mountain stages each.

Thomas won two mountain-top finishes in 2018 and Simon Yates won two stages the following year – the first of the two was a 209.5-kilometre-long stage which included two ascents.

If there is one standout thing one could say about a British win on a mountain stage, it is that the stage will be over 160 kilometres long, and include at least two climbs, where almost a quarter of the entire stage is consumed by ascending mountains.

In the one instance that this has not occurred (Thomas’ win on stage 11 finishing in La Rosiere), the four climbs added up to 48.3 kilometres – in other words, 44.5% of the stage was pure climbing.

And that is how Thomas also won the stage on the very next day, a stage that finished on Alpe D’Huez – a stage which included three Hors Categorie climbs and one-second category climb.

That 175.5-kilometre stage included 71.5 kilometres of climbing – 40.7% of the stage was spent in and out of the seat at high wattages.

However, the Welshman was 32 at the time – three years on, not many 35-year-olds have won a stage, never mind a mountain stage.

Joaquim Rodriguez was 36 when he won a mountain stage in 2015, winning a 195kilomter long stage that finished in Plateau de Beille – that makes him the oldest mountain stage winner in the last decade.

INEOS, and previously Team Sky find themselves in a novel position in that they do not have a yellow jersey to defend from the previous year.

Thomas will be surrounded by a strong team and strong climbers (Porte, Carapaz, Geoghan Hart), and instead of looking for a stage victory on a mountain stage, he may instead look at medium mountain stages.

He can take solace from the fact that ‘older’ Brits in David Millar and Steve Cummings have used their time trialling capabilities to win medium mountain stages at the ages of 35 and 34, respectively.

And then there is Chris Froome, who is still looking to add his name to the list of five-time Tour de France winners, has also won five mountain stages between 2012 and 2016, including a win on Mont Ventoux in 2013.

Unfortunately, since his crash at the 2019 Criterium du Dauphine, his recovery process has been long, he has changed teams, and does not look like he can challenge for the yellow jersey nor any mountain stages.

Slovenia is the most recent country to add their flag to the nationalities of stage winners at the Tour de France, Primoz Roglic did so first in 2017, and added another in 2018.

Winning stage 19 of the 2018 edition, Roglic covered six climbs at a distance of just over 200 kilometres.

The eldest of the two best-known Slovenian riders ended fourth in the Tour de France that year, and very memorably, second in last year’s edition.

Neither of those two mountain stages finished at the summit – instead, after reaching the last climb, Roglic made sure he was the fastest in the descent from Col du Galibier in 2017 and Col d’Aubisque in 2018.

In other words, he will target mountain stages that do not finish atop a mountain, of which there are three this year.

Last year’s winner, Pogacar, has noted on several occasions that the mountains are his natural environment; if it had been up to him to plan this year’s route and mountain stages, he would have added a few more mountaintop finishes.

The youngest Tour de France winner in the post-war era won three stages last year – all of which were mountain stages.

Two of those finished on top of a mountain – stage 15 atop Grand Colombier at 1501 metres altitude after two category one climbs, and then the mountain time trial the day before Paris.

Finishing at La Planche des Belles Filles (1035 meters) – the young Slovenian had more than a minute deficit to his countryman but won the 36.2 kilometre stage and bested Roglic’s time by 1 minute 56 seconds to take the yellow jersey.

What the defending Tour de France champion enjoys are hard stages above 150 kilometres long that have at least three climbs two category one climbs, and preferably those that finish at altitude.

Before that, read about how the nationality and age of Tour de France stage winners have changed in the last decade. 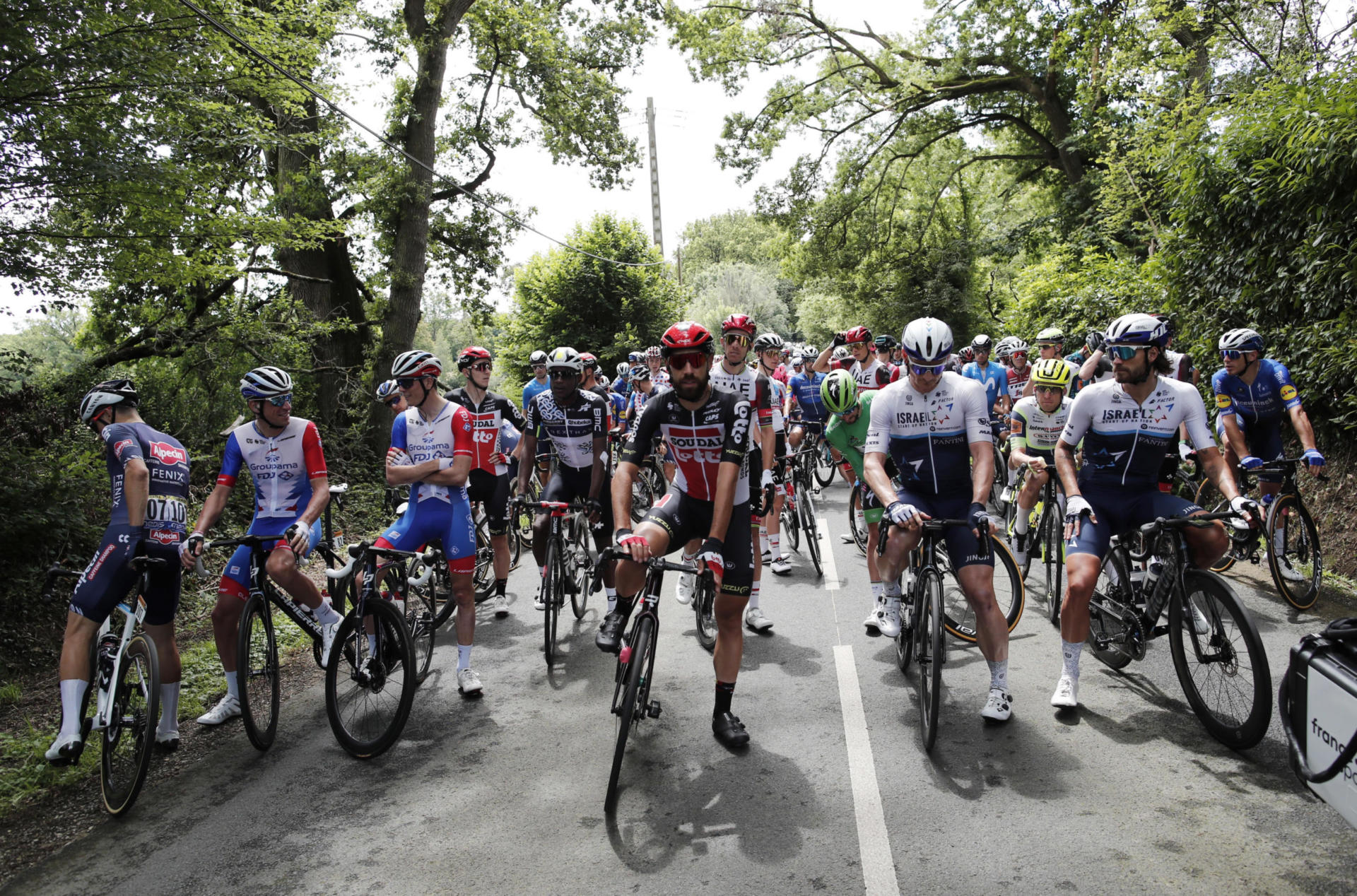