Tony Martin, who was taking part in his 13th consecutive Tour de France (a record for a rider at this year’s event) was forced to abandon today’s stage in the opening kilometres. The German has now failed to finish six of his 13 Tours, a record which is only ‘bettered’ by Mario Cipollini, who started eight editions, but finished none of them. Martin is the 21st rider at this year’s Tour to abandon – on average, every Tour sees between 25 and 50 riders abandon by the time they reach Paris.

Van Aert is the first Belgian, while wearing the Belgian road race champion jersey, to win a stage at the Tour since Philippe Gilbert in 2011 – he has now won a stage in every Tour that he has participated in since making his debut at La Grande Boucle in 2019.

Since 2019, van Aert has won four of the six stages won by Jumbo Visma in the Tour, excluding the team time trial that the team won in 2019.

A Belgian rider has now won three stages at this year’s Tour – equalling the number of wins in 2019 (also three).

Julian Alaphilippe became the first French rider since Richard Virenque in 2002 to crest the first summit of the Mont Ventoux in first place.

In what is his 10th participation in the Tour de France, Peter Sagan has stepped out – it is the first time he has left the Tour due to an injury. How popular is it to bet on cycling he previously left the Tour in 2017 following a disqualification for his involvement in a crash; it is only the fourth Grand Tour that he has failed to complete in his career.

For the second Tour de France in a row, Sagan has failed to win a single stage, which also occurred in 2014 and 2015 – his best result at this Tour was 5th place, in stages four and six, and managed just three top 10 finishes.

Not since 2012 have we seen as many as 29 riders not start a stage as early as stage 12 – both France and Belgium have had six riders abandon.

In his fifth participation at the Tour de France, Nils Politt won his first stage – his previous best finish was 8th in stage 5 of the 2019 Tour. It was also Bora’s first stage win at the Tour since Lennard Kamna’s win in stage 16 last year, and their second Grand Tour stage win of the year after Peter Sagan won stage 10 of the Giro this year. Bora are the only team to have won at least one stage in the last eight Grand Tours.

Carcassonne welcomes a Tour de France stage finish for only the seventh time; the last winner here was Magnus Cort Nielsen in 2018 (stage 15). The Dane has since added another Grand Tour stage victory, stage 16 of the Vuelta last year, and has four stages in total to his name (1 Tour, 3 Vuelta).

Omer Goldstein is the first Israeli cyclist to pick up green jersey points – he gained 20 points by crossing the line in first place at the intermediate sprint (Fontès), 104.2 kilometres into the stage; if Goldstein were to reach Paris, he would be only the second Israeli rider to finish a Tour de France after Guy Niv last year.

Mark Cavendish has now won 34 stages at the Tour de France and thereby equalling Eddy Merckx’s record set in 1976. Whilst Merckx won in 24 different cities and towns across France, Cavendish has now been victorious in 28 different towns/cities. They have both won four times in Paris.

Today was the sixth longest stage that Cavendish has won (220 kilometres) at the Tour – the longest was 232 kilometres from Cholet to Chateauroux in 2008 (stage five).

Cavendish has won the green jersey for the tenth stage in this edition of the Tour de France, his second-best streak since 2011 (11).

Cavendish won his seventh stage at the Tour in the Quick-Step colours today – thereby surpassing Tom Boonen, Marcel Kittel and Julian Alaphilippe who all have six wins for the team. No other World Tour rider has come in the first place more often than Cavendish this cycling season, picking up nine victories thus far.

Nairo Quintana has worn the polka dot jersey for the fifth consecutive stage; no Colombian cyclist has achieved this in the Tour de France since Mauricio Soler in the 2007 edition (five also).

Two former stage winners in Soren Kragh Andersen and Warren Barguil were both non-starters before stage 14– bringing it to 35 riders who have now pulled out. Andersen last won two stages at last year’s Tour de France (stages 14 and 19).

Quillan is the host town of a Tour de France finish for the first time in the race’s history; today’s stage counts five climbs in a total of which three are category two climbs – the only stage at this year’s Tour with that many category two climbs.

Dutch riders have now won two stages at this year’s Tour de France (after Mathieu van der Poel’s win in the second stage) – the last edition they won at least two stages was in 2019 (three-stage wins).

At the age of 34, Mollema became the fifth stage winner at this year’s Tour (after Cavendish’s four stage wins) over the age of 30 to win a stage – not since 2016 has that happened when eight stages were won by riders aged 30 or over.

Mollema is now the second-oldest Dutch rider at 34 years and 226 days old to win a Tour de France stage. Gerrit Voorting was 35 years and 159 days old when he won a stage at the Tour in 1958.

Mollema was also voted as the most combative rider in this stage – he is the third Dutch rider to win that award after Ide Schelling (stage one) and Wout Poels (stage eight) in this Tour; no other country has won more combativity awards at this Tour than the Dutch.

Cavendish will wear the green jersey for the 12th day tomorrow, thereby breaking his own record of having worn the jersey for 11 days in 2011 – the year he won five stages.

This stage saw the riders crest the highest point of this year’s Tour – the Port d’Envalira at 2,408 metres – it is also the second time at this year’s Tour that the peloton goes over the 2,000m altitude mark.

It is the second stage at this year’s Tour (after stage 8) that riders have to get over three category one climbs.

For the seventh stage in a row, at least one rider has abandoned the Tour de France 2021 – Nacer Bouhani was the first rider to abandon today, making him the 36th rider to withdraw in total.

Kuss is the first American to win on Andorran soil when the Tour has visited the country; the previous four Tour stages that finished here were all won by a European rider.

Mark Cavendish has worn the green jersey for the twelfth consecutive day, surpassing his best record in the Tour de France, achieved in 2011 (11).

Alejandro Valverde finished in second place – the last time he finished as well as that was in the 2019 Vuelta, stage 20; he also finished second in stage 20 of the 2019 Tour de France. His last stage win in the Tour dates back to stage 17 of the 2012 edition.

Wout van Aert won the most combative award today – as a nation, Belgian riders have won the award on four occasions at this Tour de France, more than any other country.

A Tour de France stage ends in Saint-Gaudens for the 10th time today – today’s mountain stage is the eighth mountain stage to finish in the city; the two other stages were flat.

The last winner in Saint-Gaudens was Russian Dmitri Konychev in stage 14 in the 1999 edition. Since his win in the Haute-Garonne, five stages have been won by Russian riders. A Russian victory will not happen today, as there are no Russian riders taking part in the Tour de France this year.

Patrik Konrad is the first Austrian to win a stage in the Tour de France since Georg Totschnig in 2005 (stage 14); in total, Austrian riders have now won five stages at the Tour, of which three came in 1931 (Max Bulla).

After finishing in second place on stage 14, Konrad has won his first Tour de France stage as well as his first stage in a Grand Tour, of which he has participated in seven.

The last Austrian to win a stage in a Grand Tour was Lukas Postlberger in the 2017 edition of the Giro (stage one).

Bora-Hansgrohe have now won a stage in the last eight Grand Tours – no other professional cycling team has done better. 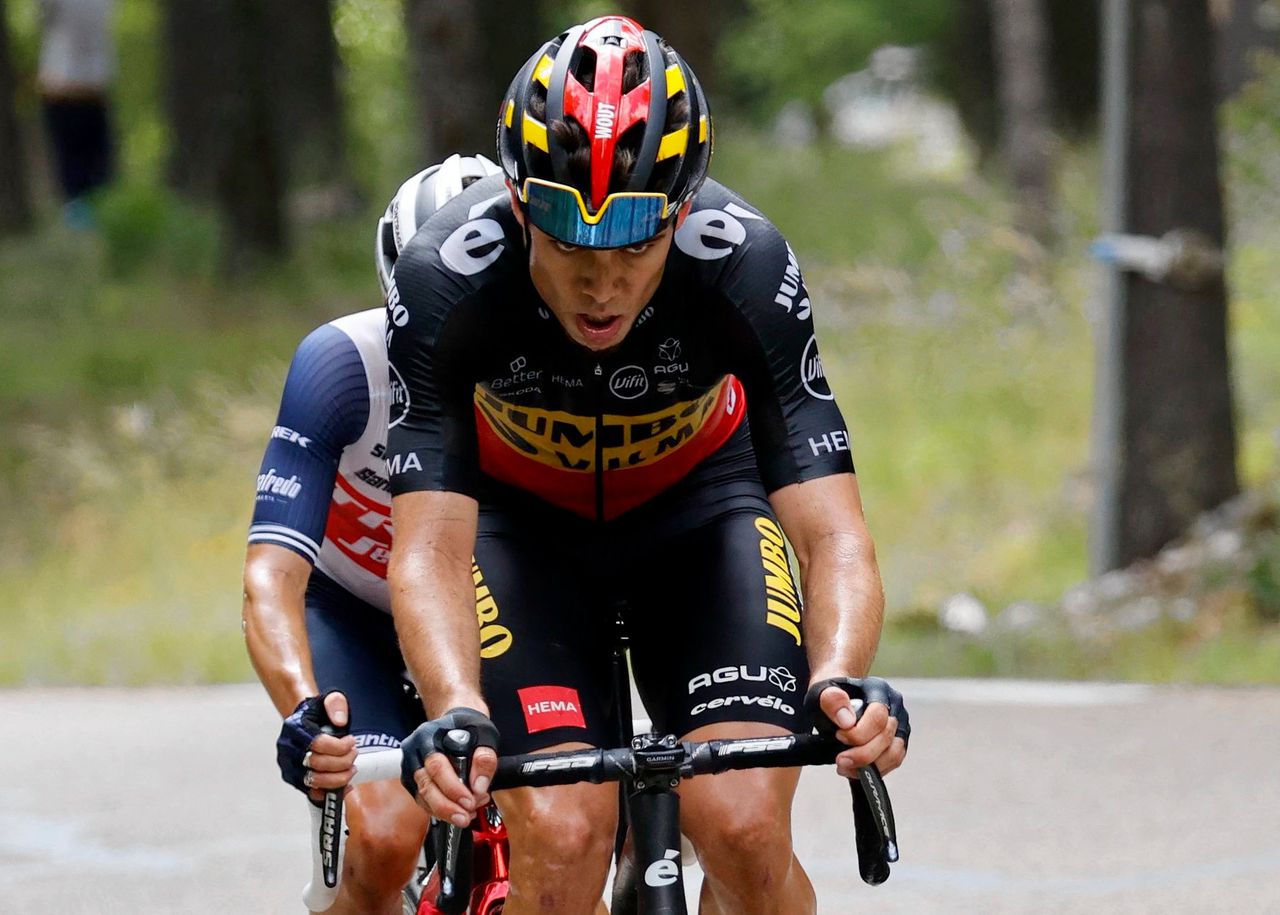