Although lightweight prospect Paddy Pimblett will enjoy an enthusiastic welcoming from his home crowd at the O2 Arena on Saturday, he is already beginning to experience the not-so-pleasant side of being a UFC star. Israel Adesanya, the reigning middleweight champion, recently referred to Pimblett as a “hype train” who is being fed handpicked “bums” designed to strengthen his resume. Alas, the next installment of Fight Night will be entertaining, just to see if Pimblett can “live up to the hype.” With all the chatter surrounding Pimblett this week, it’s easy to forget that the main event of the evening features Alexander Volkov versus Tom Aspinall. There’s a lot to unpack here. Without further ado, let’s get into it!

Upon making his UFC debut in 2016, Alexander Volkov promptly won his first four fights. He looked like a serious prospect on his way to a not-so-distant title shot. However, since his intense debut, he has dropped three out of his last seven fights and is no longer considered an imminent title threat. At 33-years-old, he has a lot of great fighting left in him; competing for the heavyweight title could still be a part of his future. In the meantime, he will have to make a good showing of himself in London this weekend if he wants to keep moving in the right direction.

Tom Aspinall is from Manchester England; this weekend’s duel in London will be a sort of homecoming for him. He is just 28-years-old and has not lost a single fight since 2016. He is already ranked in the top 15 among heavyweights in the organization and a good showing on Saturday could catapult him into the top five. Whether or not he’ll get a title shot remains to be seen, but a win on Saturday would due wonders for his chances.

ALSO READ:  What Happened To Marlon Moraes And What’s Next?
Embed from Getty Images

The lone loss in featherweight challenger Arnold Allen’s career took place in 2014. That means he’s been undefeated for close to eight years, a remarkable feat for anyone involved in combat sports. Allen made his UFC debut in 2014 and is yet to receive his first title shot with the organization. A great performance back in his native country of England could do wonders or his profile, thereby greatly increasing his shot at moving up in the rankings.

Featherweight prospect Dan Hooker has lost three out of his last four fights. However, in the interest of fairness it must be noted that those losses came against Dustin Poirier, Michael Chandler and Islam Makhachev, back when Hooker was fighting at lightweight. Not only is the lightweight division the most intense in the entire sport, those three men are among the best competitors the sport has to offer. If Hooker is able to impress on Saturday, the narrative will be that he bounced back from tough defeats instead of succumbing to them.

Paddy Pimblett developed a Rockstar following in the U.K. before making his UFC debut in September of 2021. Now that he’s preparing for his second fight in the organization, the good feelings, smiles and handshakes are gone; this is about business. Ultimately, other lightweight prospects will not care about the fanfare surrounding Pimblett. His respect will have to be earned inside the octagon like everyone else’s.

ALSO READ:  Are people being fair regarding Islam Makhachev?

Rodrigo Vargas is a 36-year-old octagon veteran who began fighting professionally back in 2011. He will most likely never be crowned the champion of the division but he is a wily veteran with a great sixth sense. The organization wants to use him as a Guinee pig to see if Pimblett is ready for the big stage. One thing history has taught us is that Vargas will show up ready to fight and prepared to give it everything he’s got.

Welterweight challenger Gunnar Nelson hasn’t been seen inside the octagon since 2019. That’s a nearly three year layoff. Taking that amount of time off is difficult for any athlete; the timing of the central nervous system requires repetition and practice in order to stay sharp. The odds of him returning to form in his very first fight are slim to none, but anything’s possible when a fighter is a second degree Black belt in Brazilian Jiu-Jitsu with as much experience as Nelson has.

Takashi Satō is a Black belt in Judo. He has spent his entire athletic career focused on combat sports. At 31-years-old, he is one of the most technically sound fighters in the welterweight division. Like Nelson, Satō has had a prolonged absence from competition. He hasn’t performed for the fans since November of 2020; it will be interesting to see if he can shake off the cobwebs after almost a year-and-a -half absence from the biggest stage in the sport.

Flyweight prospect Molly McCann is a native of Liverpool, England. In 2021, she lost one fight and won the other; she is hoping to turn her fortunes around in 2022 with a string of strong performances. Her opponent, Brazilian born Luana Carolina, is on a two fight win streak and anxious to continue her momentum. This fight will be a battle of wills between two women who want to see their careers continue moving in the right direction, instead of suffering a major setback.

Jai Herbert is a 33-year-old, octagon savvy veteran who is yet to achieve the success once projected for him. At one point, he held the Cage Warriors lightweight championship. However since joining the UFC, he is yet to receive a title shot. If he wants to make that dream a reality, he badly needs a win on Saturday in his home country of England. His opponent, Ilia Topura, is only 25-years-old and is undefeated as a professional. Topuria is currently ranked 15th in the division. He has every intention of climbing the ladder and eventually earning a coveted title shot. A win on Saturday, with the whole world watching, would definitely be a step in the right direction.

UFC London 2022 can be viewed on BT Sport in the United Kingdom and on ESPN Plus in the United States. As always, we’ll have all the latest updates about the outcomes of the fights, as well as in depth analysis available right here at World in Sport! 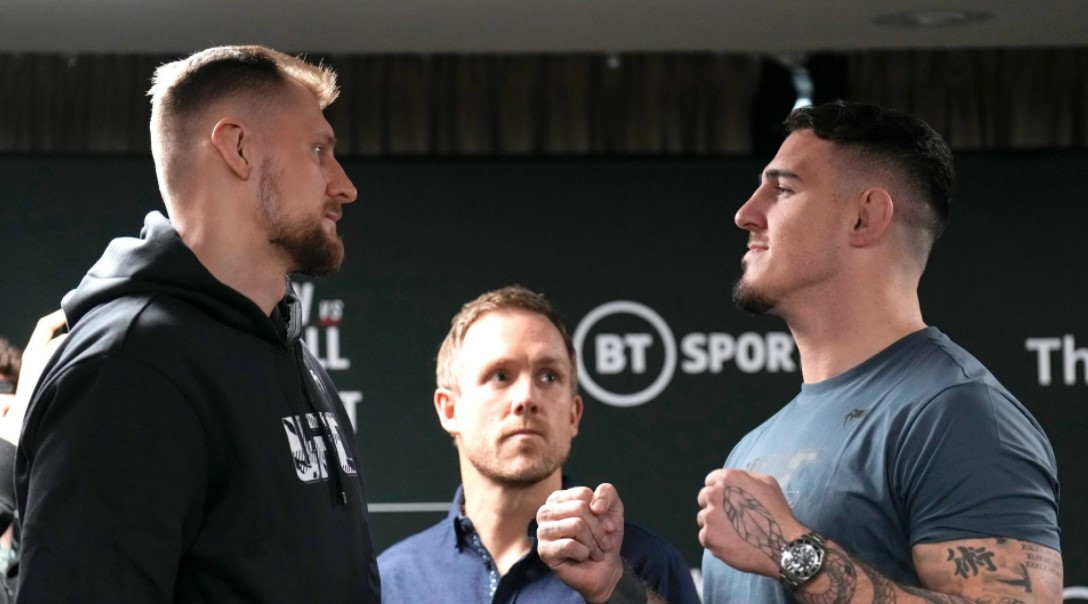