There were some wide betting lines on August 22nd for UFC Vegas 7. Like, -1000 or more wide. Usually in sports when you see odds like that, it means everybody knows how the event is going to end up.

The oddsmakers, the seasoned bettors, the casual fans, you’d get laughed off Twitter for taking an underdog with those odds. But the thing is, Twitter isn’t the octagon, and on August 22nd, nobody remembered to tell the underdogs how the fights were going to go.

This roller coaster of an evening kicked off right at the start of the prelim card, with strong favorite Timur Valiev (-600) taking on Trevin Jones at a catch weight of 140 lbs. After a flurry of blows from Valiev in the first round almost ended the fight to a referee stoppage, Jones weathered the storm and made it back to his corner.

The wider MMA community was sure that there would be more of the same after the break, and that we wouldn’t be seeing the full five minutes of round two. However, midway through that round, Jones took his opponent to the canvas with a beautiful right hand to the jaw, promptly following the shot up with a flurry of ground and pound that would see the fight stopped. While an upset of this magnitude would be exciting on any fight card, little did we know what was still to come.

One bookie I saw online had Mariya Agapova as a -1300 favorite before the start of our women’s flyweight fight of the evening. Those are Mike Tyson in the 1980s numbers. She had been criticised for calling out a fighter with a losing record in school teacher Shauna Dobson, who was coming off three straight losses. Most didn’t expect the fight to make it out of the first round.

This was the one that everybody was sure they picked correctly. And then the fight happened. Agapova came out of the gate whirling like a dervish, throwing every shot that looked even close to available, at full force. Punches, kicks, elbows, the flurry of limbs made it clear that the Kazakhstani fighter wanted to put a fourth straight finish victory on her record, and she wanted to do it in the first round.

The first round came and went however, and the audience found themselves wondering if Agapova would have any energy left. Dobson had attempted an arm bar from the bottom, but other than that all she was spending her energy on was making sure not to get choked/knocked out.

It was clear that the game plan for Agapova was to end the fight in the first round, with no consideration for going the distance. She came out gassed in the second, with heavy shots coming out significantly slower, and connecting significantly less. A minute into the round, we would see a shocking sight; Dobson on top raining shots down on an exhausted opponent, stomach flat on the canvas, and 30 seconds later we would see referee Jason Herzog calling a stop to the bout.

There was something in the air at the UFC Apex on August 22nd, a little extra fire in the fighters for this card, one that was widely critiqued as a poor set of fights for a Saturday event before the day. 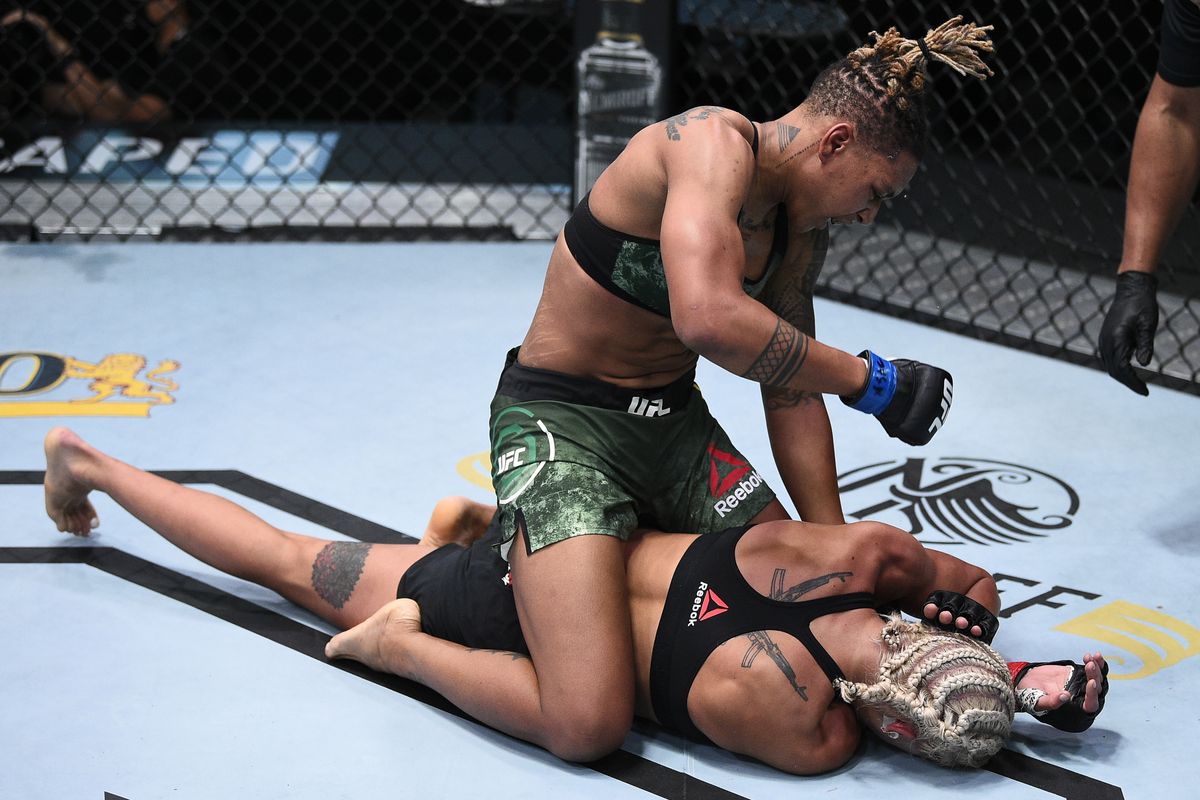