Despite not planning on lacing up a pair of wrestling boots at this stage, the man who is a manager at both CAWS and UKPW (United Kingdom Professional Wrestling), and is also UIWA (United Independent Wrestling Affiliates) President, PT Player; boasts a record of five C.A.W.S World Tag Team, and three Wildcard Championship title reigns.

Not only that, but the man ‘who’s ego has its own postcode’ has worked with several high profile superstars such as ‘The Wonderkid’ Jonny Storm, James Mason, and former ECW and TNA World Heavyweight champion Raven, as well as mentoring a new generation of British talent.

PT Player appeared on Rock Bottom Radio this past week, providing exclusive insight into life as a manager, working as a performer, as well as answering several questions from the Rock Bottom Universe and crew panel.

On getting into the Ring

“We all get the urge to get in the ring at some point, but due to the misfortune of where I was working at the time in 2005, I had not had a proper amount training the time I made my debut.

It was just assumed because I’ve been in the industry for so long, that I could just go out and do it, which is very far from the truth. Having said that, it worked out alright in the end, I guess.”

A common feature of professional wrestling is the many injuries one may attain during in ring competition.

PT says he has suffered a shopping list of injuries, including 10 concussions, but says deep down he would do a lot of it all over again had he had the chance.

“When they say that it’s a dangerous business, that’s because it is. I went down a somewhat more hardcore route in a lot of respects, so that involves weapons, some silly bumps and falls, and injuries. I loved wrestling. I wouldn’t swap a lot of what I did, the memories, and the experiences, for the world; but now I’m more than happy managing, and it would take a lot to change that.

“My daughter is very protective, and at times it makes you think maybe I should step back from in ring competition. My two children being by my side is vital to me. They have to be your focus. I’ve had a lot of girlfriends walk out in the end because of what I do, but there has to be a level of understanding and compromise on both sides. This has been my life.”

It’s a well-known fact a strong wrestling manager can take even an average/undercard wrestler, and turn him into a superstar. Eccentric personalities such as Jim Cornette, Sensational Sherri, Mr.Fuji, Paul Heyman, and Truth Martini have all proved crucial to the careers of various wrestling superstars that were catapulted to stardom. PT Player was voted the UKPW manager/personality of the year for 2014 and says having a manager by your side can make you a better in ring performer.

“If there is a person out there who doesn’t respect Bobby “The Brain” Heenan, I don’t want to meet them. I’ve personally had a lot of Paul Heyman comparisons throughout my career. Jimmy Hart was ridiculously underrated as a manager.

“I’d have to say I’m a big fan of 80’s managers. In NWA/WCW, there was Gary Hart, Skandor Akbar in the USWA; you could watch any promotion back then, and find a manager that you could learn from. The managers of today are very different to those of the past.

“For a lot of wrestlers, if they had a manager behind them they could focus more on their own abilities in the ring, while their manager helps the fans connect with the crowd.”

Brock Lesnar’s decision to remain with the WWE

PT gave his opinion on Brock Lesnar’s decision to turn down the UFC and pen a new contract extension with the WWE.

“What have WWE fans been complaining about? They’ve said Brock Lesnar is not loyal, and doesn’t turn up to enough shows. By resigning, it’s a step in the right direction, in the eyes of many; it’s a conscious attempt to make up for breaking the Undertaker’s Wrestlemania streak”.

The Undertaker’s 21-0 unbeaten Streak was broken by the ‘Beast Incarnate’ Brock Lesnar at last year’s Wrestlemania.

“From my point of view with Brock, perhaps looking at it a bit cynically, he’s older than he was. He might not be able to cope with the UFC anymore. You could also look at it as he’s made the decision based on what’s best for him at this point in his career, and that he actually wants to stay with the WWE.

It’s no secret John Cena is habitually criticised for his narrow moveset, which has been christened ‘the five moves of doom’. The WWE have a very restricted wrestling style, often limited athletes to a narrow moveset thus a criticism of the WWE is that their wrestling has declined over the years. ‘Perfectly Sexy’ PT Player says the wrestling mechanics have changed since the days of the golden generation, and that John Cena’s moveset would have gone unnoticed 20+ years ago.

“If John Cena was wrestling 20 years before he wouldn’t get the ridicule he gets today. Following on from that, Roman Reigns is in the wrong generation. The reason why is not getting over the way the WWE would like in terms of wrestling booking, is because he is a throwback to a different time.”

“I was watching some old school NWA-TNA on YouTube while R-Truth (Ron Killings) was the Champion. That man is good. He is very good, in fact, and even at his age he is better than a large portion of the roster.”

“I want to see J+J Security more than I do a lot of things. Any time they have an involvement, you’ll learn something. Jamie Noble is one of the most underrated cruiserweights ever. He’s absolutely superb. I always preferred cruiserweights of his nature. I find they are a little more technically sound.”

A general lack of character depth has also been a criticism for the WWE in recent years. Several superstars who have very accomplished résumés, such as the Miz, Wade Barrett, Sheamus and Kofi Kingston are floundering at midcard level, struggling to connect with the crowd and establish themselves as top tier superstars. This lack of character depth in the opinion of PT Player can do more damage if a WWE superstar is put on TV with no creative story behind him.

“It’s assumed having a spot on television is always a good thing, sometimes it isn’t. If creative have no plans, no direction for you and basically don’t know what they are doing with you, sometimes it can do the character more harm than good.”

On May 9th, in Gillingham, Kent; PT Player will be managing his long time client and friend Gabriel ‘Hitman’ Myers; as they challenge former WWE and TNA star and British wrestling legend James Mason for the UKPW World Championship. For more information check out UKPW’s Facebook page https://www.facebook.com/UnitedKindomProWrestling?fref=ts 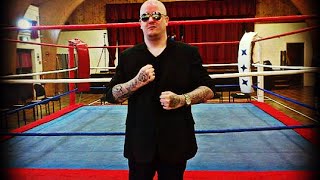