In what many are calling the game of the season, the Ravens and Browns combine for 369 rushing yards and nine touchdowns on the ground. The nine running scores in a game tie the NFL record. All total, these two teams put 89 points on the board, in a game that went back and forth, with a victory being decided in the closing seconds. This game had a huge impact on the AFC playoff picture as these AFC North rivals battled it out for supremacy. As the smoke cleared, the Browns are still clinging onto the 5th seed and the Ravens are in the 8th, one spot out of a playoff berth.

The Ravens rushing attack was led by quarterback Lamar Jackson, as he ran for an MNF record (for a quarterback) 124 yards. He added two touchdowns on the ground and one more through the air. He also threw for 163 passing yards. Jackson briefly left the game at the beginning of the fourth quarter as a result of cramping, but he returned just in time to lead when they needed him the most.

JK Dobbins added 53 yards and a touchdown on the ground, and the Gus Bus ploughed for 49 yards and two touchdowns, to complete Baltimore’s dynamic rushing game. They piled up 231 yards in total.

On the Cleveland side, Nick Chubb ran for 82 yards and a pair of scores to pace the Browns backfield. Kareem Hunt added 33 rushing and 77 receiving, scoring a touchdown in each department. QB Baker Mayfield collected 23 with the rush and the final running touchdown of the record-tying performance.

Mayfield also threw for 343 yards and two touchdowns, connecting with three of his receivers at least six times. Hollywood Higgins, Jarvis Landry and Hunt were his favorite targets, as Higgins scored the other touchdown in the passing attack.

On the defensive side, Cleveland was bringing pressure on Baltimore’s offense all game. Olivier Vernon and Sheldon Richardson made their marks early and often, as the pair combined for three tackles for loss, three sacks and one defended pass. They especially came up clutch early in the fourth quarter, as their pressure forced a three and out. The Browns capitalized on their effort and drove for the go-ahead touchdown.

Tyus Bowser came up big for the Baltimore defense, as the Ravens threatened to run away with the game early in the second half. His interception returned to the one-yard line set up a Dobbins touchdown, giving the Ravens a 34-20 lead at the time.

The game was most exciting in its final few minutes. At that point in time, Jackson returned for the Ravens. Baltimore was facing a fourth and five from the Browns 44, down 35-34, with two minutes left to play. Jackson immediately imposed his presence on the game, throwing a 44-yard touchdown strike to Hollywood Brown. Brown at that moment redeemed his three dropped passes from earlier in the game. Baltimore tacked on the two-point conversion, going up 42-35.

Cleveland wasted no time responding. Three quick strikes from Mayfield travelled the Browns 53 yards in a little more than thirty seconds. On the very next play, he connected with Hunt, who took the catch and added a beautiful run to score the touchdown for the Browns. Cleveland knotted up the game with the extra point.

The Browns left the Ravens too much time, however, as Baltimore had a little over a minute to perform their final miracle. And that they did. A few key plays, including a couple of huge strikes to Mark Andrews, and Jackson was able to lead the Ravens to the edge of field goal range. Then, it was time for Justin Tucker to work his magic. His 55-yard field goal attempt with seven seconds left was good, all but sealing the victory. A desperation play for Cleveland padded the score for Baltimore with a two-point safety.

The Ravens emerged victorious, 47-42, in a much-needed victory over the Browns 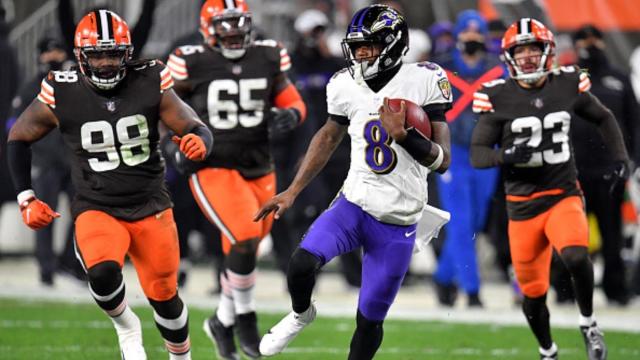