The Indianapolis Colts went into Foxboro hoping to get back to the Super Bowl but they would have to beat a surging Tom Brady and company to make that possible. Colts haven’t been to a Super Bowl since 2009 and it wasn’t going to be easy-going up against the Patriots who have always had the Colts’s number in the postseason.

From the start off the game it wasn’t looking to promising for the Colts as both teams had a three-and-out. With a miscue on the Patriots punt by Joshua Cribbs, the Pats then were able to pick up the fumble and already be in striking distance of the end zone. LeGarrette Blount was able to punch it in for the score a couple plays later.

Blount, who in the 2013 Divisional Playoffs, roasted the Colts defense for 166 yards and 4 TDs. He didn’t quite have the same type of game but was still very effective rushing the ball. He ended the day with 148 yards and 3 TDs.

The Colts had few chances getting in the end zone the whole game. Their lone score of the game came off an interception by D’Qwell Jackson which the Colts would march down the field to score. That was the longest drive the Patriots had given up all year. Adam Vinateri was money all season long but missed a 50-yarder.

The Colts were not able to move the ball offensively at all. The Patriots stuck to their game plan they had earlier in the season when they played each other in Indianapolis. They doubled up on T.Y. Hilton so the deep threat was taken away and stick Darrelle Revis on the next best wideout.

With the lack of valuable weapons around Andrew Luck they had a difficult time passing the ball. With the deep threat of Hilton taken away there was no vertical passing game. Donte Moncrief was stuck on Revis island the whole night and wasn’t able to register a catch on one lone target.

With the Colts running game being suspect to physical defenses they were in for a long game and it showed. They were not able to move the ball getting only 209 total yards for the game. Luck didn’t look like the Luck we saw a week earlier against the Denver Broncos. Luck went 12-33 for 126 yards and had 2 interceptions.

He was only 3-of-17 with an interception on passes that were five or more yards and 2-of-13 on passes to wideouts.

Where do the Colts go from here?

Well with the season over Andrew Luck and the Colts can now begin talks with a new contract. Sources say it could be up to $25 million dollars a year.

The 36 year-old Reggie Wayne still has to decide whether he is going to come back for a another season too. The Colts are going to need to build up a defense and some help on the offensive line which was a problem throughout the regular season as Luck was hit often. 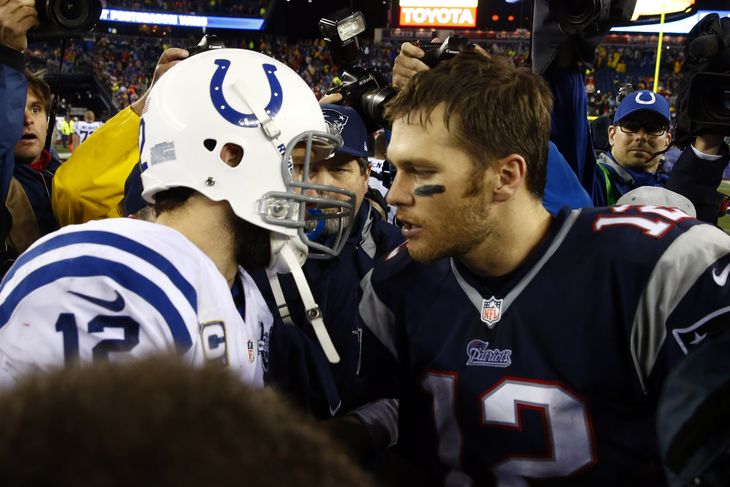