Ready to do it all again.

With car launches and preseason testing just a few weeks away the worst of the F1 withdrawals should be beginning to subside and soon the motorsport community will be awash with a new sense of possibility. So let us get to recklessly speculating about the season to come.

Who will win the Driver’s Championship?

Lewis Hamilton. While former racers have come out and praised Rosberg’s ability and touted him to challenge Hamilton again this coming season I feel like Lewis Hamilton will now walk into the paddock in March with nothing to prove and the supreme confidence in himself to win again. He will be relaxed and ready to make a proper defense of his title, unlike 2009.

He has the best car on the grid and no one outside of Rosberg will be able to compete on a level playing field with him. Rosberg’s disadvantage will be that all the mind games last season did nothing in reality in slowing Lewis down or jarring his resolve. Lewis wins with races to spare.

Who will win the Constructor’s Championship?

Will Ferrari win any races this year?

While it must be hard to continue losing when Bernie is handing you millions of euros just for showing up but I feel like Ferrari are in for another tough year. New team boss Arrivabene stated last week that “two or three” wins for the team is their objective this season.Which is reasonable and optimistic at the same time.

If Ferrari don’t win any races people may start pointing to Kimi’s unhappiness with the new driving style needed for the new cars or that 4-time world champion Vettel is merely a product of Adrian Newey’s genius. But the reality is Ferrari is a team in the middle of a major transition. Anyone who believes firing most of your heads of staff will all of a sudden produce a winning car needs their head examined, rebuilding will take time. They can’t keep this bad form up forever but this will not be the year of total resurgence. They will fight for podium positions on a few occasions and finish fourth in the championship.

How will Mclaren and Alonso do?

My guess is badly. Even though the ruling regarding engine upgrades and homologation has been clarified, leveling the field somewhat, the fact is that there will be MORE teething problems. 3 laps in two days of early testing is simply not good enough, and who knows what kind of gremlins may appear at the preseason tests in Spain after a horrible start.

Like Ferrari, Mclaren are in the middle of restructuring, only with the added caveat of putting the brand new Honda engine’s in their cars. Cars that have been wildly unpredictable in terms of their competitiveness over the last three years. The one thing that Mclaren do have going for them is that arguably the best driver on the grid is in their team. But as Alonso’s time at Ferrari proved he isn’t a miracle worker, he needs the car to be reasonably competitive and he can fight for wins.

But couple the in-house restructuring, the reintroduction of Honda and the potential for financial restructuring amongst the team’s shareholders it leaves Mclaren fight in the middle of the pack this year. Alonso will get one win, and he and Jenson will be in podium contention on a few occasions but unreliability will cost them and ultimately Mclaren finish fifth overall.

What about Red Bull & Williams?

The only team who I think will consistently contend for wins beside Mercedes will be Red Bull, and when I say Red Bull I mean Ricciardo. While I admire Red Bull’s philosophy of promoting from within I don’t believe Kvyat has anything in the way of experience or talent that warranted a move up to the big team. You may say that the same was said about Ricciardo and you’d be right, but he has a season and a half worth of experience over Kvyat in F1. The people at Red Bull may know something we don’t but for now I remain skeptical of the young Russian.

Williams too should be fighting at the sharp end of the grid for podiums and points, and while Bottas was a revelation last season and Massa coming back into some kind of form it’s hard not to see a bright future ahead for the team. However something is inexplicable about Williams and it makes it hard to judge how they will fare this year. Maybe it is the feeling of dreaded anticipation that the team might come crashing back to earth this year. Maybe it is the consistent bad luck of Felipe Massa, a man so unlucky Inspector Clouseau wouldn’t trade roles with him.

Simply put the team isn’t there yet, if the car continues to be developed in a balanced way and they can keep their drivers and major engineers/designers I see no reason for them not to have a good season. Even if it is only marginally better than last season. But it is hard to say for the doldrums of only two top ten finishes in 2013 is not a distant memory yet.

Such a sharp increase in performance so quickly means they must be very careful not to slide and continue to push at the front. If Massa’s luck holds better and the car is even marginally improved I think they take second in the championship in front of a Red Bull team who lose points on Kvyat’s inconsistency and Renault’s engine unreliability.

What about the youngsters?

No doubt they are skilled drivers but how they perform will really be a further test of the new formula. As Niki Lauda said last year about Kvyat; “anyone can drive these cars.” This is one of the big talking points of the sport recently. How far should F1 go to make these cars relevant to modern driving while at the same time keeping the costs for the manufactures down AND not end up with cars that could be driven by a 70 year-old man with arthritic hips?

Right now no one is sure of the next step but the performance of Verstappen and Sainz Jr. will at least give us some further indication of what direction to head in next with regards what has to be down to increase the spectacle and the aura around the drivers. Personally I wish them the best even if I would prefer if they have to manhandle their cars like a they’re moving a wardrobe up a narrow staircase.

Lastly I have a few quick-fire predictions:

The prize money structure is finally addressed within the next twelve months reducing Ferrari ridiculous ‘thanks for showing up and being mediocre’ money and giving more to the smaller teams.

One of this group of manufactures announce their interest in joining F1 in 2017, Audi, VW, or Toyota.

Race tracks in Europe continue to struggle to break even due to ludicrously high hosting fees.

The Mexico GP will be fantastic.

Bernie holds his position as Supreme Ruler of F1 until he dies. (This will be in every prediction article until I have conclusive proof he is dead)

All in all I’d say this season will be very interesting,  especially what it will tells us about how this new brand of F1 will develop over the next few years. And hopefully, with any luck, there will be some great racing too. 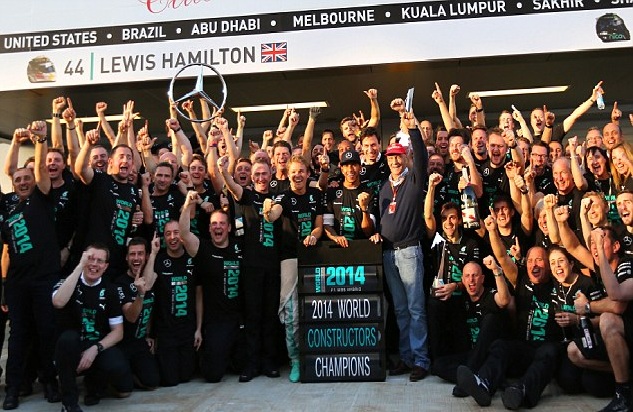