AB plays one of many comprehensive shots in his impressive innings

AB De Villiers has starred for the South African team today, belting an unprecedented 149 off of just 44 deliveries as South Africa went on to make 439/2 in their 50 over match against the West Indies.

After succumbing to a 61 run loss in the first match of the series against South Africa, the West Indies were looking to turn their form around heading into the match at the Wanderers Stadium in Johannesburg.

Things started well for the Windies, with new captain Holder winning the toss and electing to field on what looked to be a perfect South African day.

Both Amla and inexperienced opener Rossouw took little time in adjusting to the conditions, hitting a comfortable 51 runs off of the first 10 overs, with Amla contributing 31 runs and looking in fine form.

With drinks drawing closer and with no wickets on the board, the Windies appeared to have had Rossouw out LBW by Benn, only for it to be referred by Rossouw and overturned.

From there, things only went from bad to worse, with Rossouw and Amla  both scoring centuries whilst also setting the highest ever opening partnership in an ODI for the South African cricket team.

After helping take the team score and opening partnership to 247, Rossouw was eventually dismissed on 128 off of just 115 deliveries, bringing to the crease AB De Villiers.

De Villiers took no time in getting his eye in, smashing 7 off of his first 3 deliveries. From there he only increased the pace, dispatching Russell for two 4s and 6s in his next over out there.

With 40 overs gone and the team on 1/276, De Villiers took full advantage of the situation, smashing the West Indian bowling attack all over the park.

With a full crowd in at the Wanderers watching, De Villiers was able to put on a batting display for them, scoring 50 runs off of just 16 deliveries, breaking the previous world record for fastest ODI half-century set by Sanath Jayasuriya, who scored 50 off of 17 deliveries.

From there AB showed no signs of slowing down, showcasing his full arsenal of shots as he continued to send the ball over the fence and into the crowd.

With Amla at the other end, and with South Africa well past 300, De Villiers was able to continue his advance, eventually setting a new world record for the fastest ODI century, scoring his 100 off of just 31 deliveries.

After almost being caught on the rope, AB is able to smile as he sets a new world record for fastest century in an ODI

With Amla seemingly forgotten at the other end, he was soon able to bring the attention of the crowd off of De Villiers and onto himself as he surpassed 150 and his highest ever score in an ODI. The attention was soon back on AB though as he attempted to set another world record for the fastest ever 150.

In the end though 150 proved to be just too much for the South African skipper as he was dismissed for an unbelievable 149 off of just 59 deliveries. Whilst setting new records for the fastest ODI 50 and 100, De Villiers was able to equal the world record for most 6s in an innings, smashing 16 during his stay at the crease.

The West Indians will need to bat out of their skins if they are to have any chance of nearing the South African score, let alone passing it, as they face up to arguably one of the best bowling attacks in world cricket. 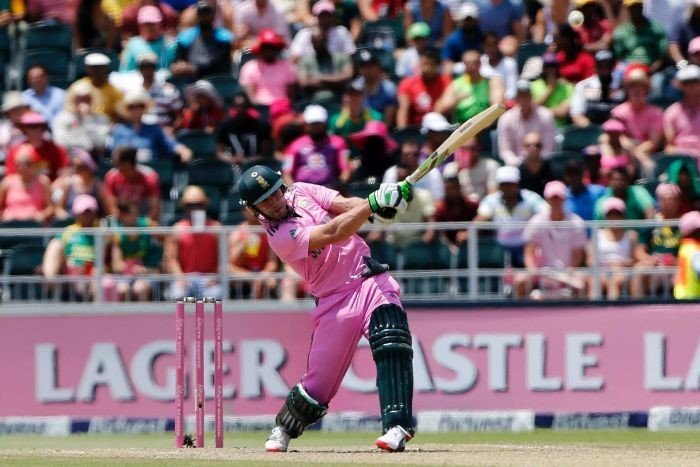