When someone discusses the best tight ends in the NFL, who are the first names thrown out there?

Generally, people believe the New England Patriots’ Rob Gronkowski and the New Orleans Saints’ Jimmy Graham are the top two. The Denver Broncos’ Julius Thomas was looking like a top tight end before his injury this season. The Dallas Cowboys’ Jason Witten, the Chicago Bears’ Martellus Bennett, the San Diego Chargers’ Antonio Gates. These guys are looked at as the top at this position in the league.

However, when discussing great tight ends, there is one player that tends to be overlooked. A first-round pick for the Bears in 2007, he developed into a solid option for Jay Cutler in Chicago before being traded to the Carolina Panthers in 2011 for a 2012 third-round pick.

Olsen has quickly become the Panthers’ top receiving target outside of rookie wide receiver Kelvin Benjamin, who has been targeted 129 times, while Olsen has been targeted 116 times. Despite this, Olsen has the second-most targets for a tight end in the NFL, second only to Gronkowski (120).

His impact is not solely in the passing game. With Carolina having one of the worst offensive lines in football, Olsen has had to stand in as an extra blocker for Cam Newton and the running backs. He has done a phenomenal job with this as well, not allowing opposing players to get into the backfield.

In a season that seemed lost, Olsen has stepped up and become a leader for this franchise. He is consistently making solid plays and keeping Carolina in the game. During many games, he is shown on the sideline or on the field talking to his teammates, trying to encourage them and keep them focused.

So, why isn’t number 88 looked at as one of the top tight ends in the game? There are two reasons why.

Number one is the team he plays for. Although the Panthers are currently on a two-game winning streak and are still in contention for the NFC South title, they have a poor record of 5-8-1 and just recently came off a six-game losing streak. Now, with Newton experiencing yet another injury, they do not look like they can make any noise in the playoffs if they do in fact wind up winning the worst division in the league.

Number two is other tight ends. As mentioned above, there are a plethora of great tight ends in the NFL, all of which have consistently proven themselves week in and week out.

However, Olsen is proving himself each week as well, and is a heavy favorite to make the Pro Bowl. It is well deserved.

The question now is this: where exactly does Greg Olsen rank among these great tight ends?

First of all, we have to look at the stats. Let’s take a look at the top five tight ends in each receiving category (receptions, yards, touchdowns).

Olsen is tied for sixth with five other players in touchdowns among tight ends with 6.

Based on stats alone, Olsen would be considered a top five tight end, as he is tied for first in receptions, second in yards, and tied for sixth in touchdowns. Only Olsen, Gronkowski and Graham are in the top six in each category.

Let’s also consider the quarterback that each tight end is working with. Gronkowski and Graham are each paired up with future Hall of Fame QBs, while Olsen has had inconsistency at the quarterback position. Newton has started 12 games this season, while backup Derek Anderson has started in two games for Carolina this season. Neither is consistent, nor anywhere close to Hall of Fame caliber.

One more thing to consider is other options in a tight end’s respective offense. The only other legitimate receiving threat Carolina has is Benjamin, who leads the team with nine touchdown receptions. Gronkowski has Julian Edelman, Brandon LaFell and Danny Amendola. Graham has Kenny Stills, Marques Colston and Brandin Cooks.

All of this means these tight ends are putting up these numbers with those sorts of options around them. That is extremely impressive for Gronkowski and Graham. Olsen, on the other hand, only has one guy who can truly take the pressure off of him in the passing game.

So, while Olsen may get more opportunities than someone else, it also means he will be receiving more attention from opposing defenses. This means Olsen is putting up similar numbers to the best two tight ends in the league while not only being asked to do more (come in as an extra lineman), but also while being covered more often.

All of these things considered, it looks like Olsen should be receiving a lot more attention as a top tight end in the NFL. He has emerged as a huge threat in the passing game, and defensive coordinators surely lose sleep coming up with ways to stop him. If Olsen can stay consistent over these next two games as he has done all year, he should be looked at as a top five tight end in the NFL by season’s end. 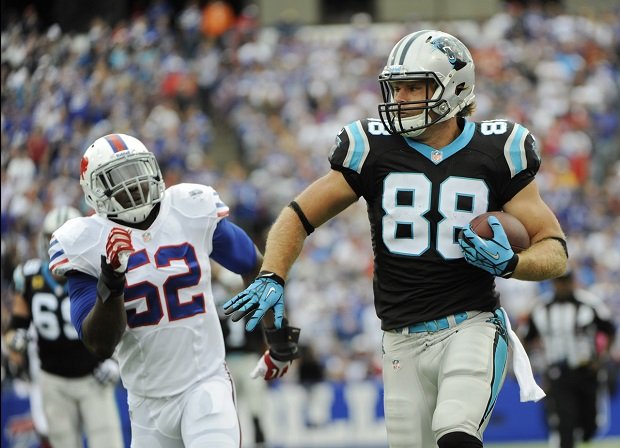