Almost since the moment the world was introduced to Alexis Lafreniere, he has been the front runner to be the #1 overall pick in the 2020 NHL draft. But the 2nd overall pick, held this year by the LA Kings, is not as black and white. Let’s look at the potential players who could be chosen 2nd overall by the Kings in this years NHL draft.

Stutzle played in the DEL this season as an 18 year old, playing mostly against seasoned pros and players quite a few years older than him. Nevertheless, Stutzle thrived for Adler Mannheim, putting up almost a point per game as a rookie. Stutzle is known for his great skating abilities, playmaking, and his strong 1 on 1 play. He has decent size, but would have to get stronger and put on some weight for the more physical North American game, especially if he ended up in arguably the roughest NHL division, the Pacific.

At 17 years old, Quinton Byfield put up almost 2 points per game for the Sudbury Wolves of the OHL. Standing at 6’4 and weighing in at 214lbs, there’s no question Byfield is physically mature enough to play at the NHL level (at 17 years old). Not only for a bigger guy, but compared to all players, he skates very well.

With such a big frame, Byfield plays well in the dirty areas of the ice. Another strength of his game are his hands, great on 1 on 1’s, as well as tight in to the net. A comparable player to Byfields game would be Pittsburgh’s Evgeni Malkin.

There are a handful of other worthy participants bidding for the 2nd overall position in this years NHL entry draft, but as per scouting reports, these are the two prospects most favored.

The LA Kings, who hold the 2nd place selection, are without a doubt in a rebuild of their franchise, and have been for a couple years now. A product of being in a rebuild and finishing near the bottom of the NHL the last couple years, the LA Kings have found themselves with a plethora of potential high quality draft selections.

The Kings seemed to have slightly improved their scouting abilities in recent years, with more promising looking prospects to show with their selections than their picks a handful of years ago. As for this, they have a fairly strong farm system with the likes of Alex Turcotte, Arthur Kaliyev and Akil Thomas. The weakness of the LA Kings’ organization is without question on the back end, but Stutzle and Byfield are simply players they can not pass on.

Stutzle has the skating and playmaking ability of a very elite player, and as he has played both left wing and centre, can be a very versatile piece who can moved from one position to the other in the lineup. With playing against seasoned veterans in Germany, the jump to the NHL should be rather effortless for Stutzle.

Looking at which conference the LA Kings play in, let alone the division, Byfield is a very attractive looking prospect considering the Pacific division is known for it’s meat and potatoes, physical like play.

Being born in Canada and playing in Ontario’s OHL, he is used to and very comfortable with North American sized arena’s and play styles. One could easily see him playing against the likes of Brent Burns, Matthew Tkachuk, Ryan Reaves, and Zack Kassian. With that, along with his long list of skills, I believe the Los Angeles Kings should select Quinton Byfield 2nd overall at the 2020 NHL draft. 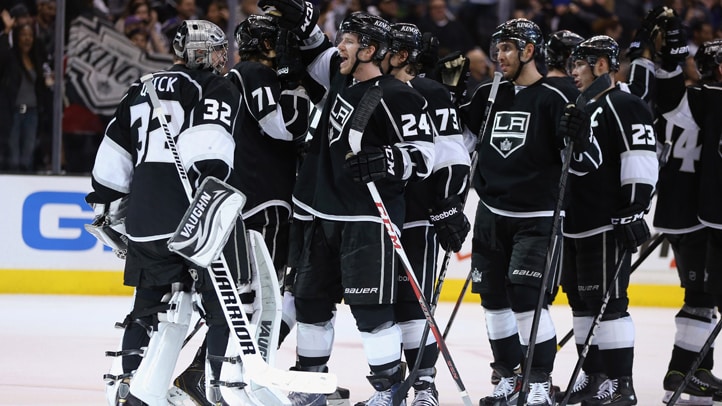